The BBC just disgraced itself over prince Andrew - The Canary 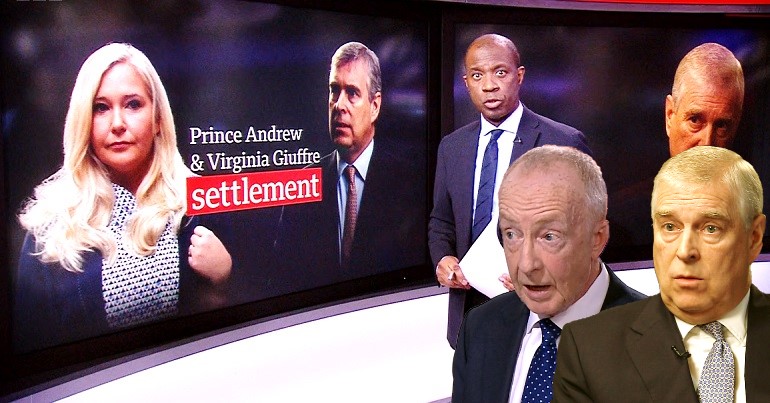 BBC News‘s coverage of prince Andrew Windsor buying his way out of child sexual assault allegations has provoked uproar. It’s because of the reporting of royal correspondent Nicholas Witchell. People have branded him and the BBC a “disgrace“. And when you see Witchell’s report, it’s of little wonder.

PA reported that on Tuesday 15 February a US court said Windsor and child sexual assault survivor Virginia Giuffre had settled out of court. Giuffre’s lawyer David Boies wrote jointly with Windsor’s lawyers to say that the parties had “reached a settlement in principle”.

Court documents show, PA said, that Windsor will make a “substantial donation to Giuffre’s charity in support of victims’ rights”. He has also pledged to “demonstrate his regret for his association with Epstein” by supporting the “fight against the evils of sex trafficking, and by supporting its victims”.

In other words, Windsor has paid-off Giuffre to make the allegations go away. And his comments about ‘fighting the evils of sex trafficking’ have essentially gaslighted survivors. Because as journalist Mark Acheson pointed out, Windsor should have been doing this “from the very start” – if he’s innocent, of course. But then the BBC got involved – and made the situation even more disgraceful.

Royal correspondent Witchell gave his assessment of the story. He posed the question no-one was asking:

Could there be a route back to public life for Andrew?

In most people’s eyes, Windsor – who didn’t initially apologise to survivors for his friendship with child rapist Jeffery Epstein – shouldn’t have a way back into public life; in fact, many would argue that prison may be a better place for him. But Witchell posed the question anyway. He continued regarding Windsor’s return to public life:

It is… very hard to see that. I mean, let’s be honest about it: he’s been shown to have very poor judgement, he’s… a liability, and frankly what charity would want him?

Giuffre has not withdrawn her allegations that Windsor is a perpetrator of child sexual assault. So, “poor judgement” is quite the understatement from Witchell.

Would anyone want someone who has been called a "sweaty nonce" to represent their charity that fights sex trafficking? Only a couple of blokes completely closed off from reality would ask this out loud. https://t.co/u19vjAmuay

If this is the only route back, there is no route back. Pretty offensive suggestion frankly… https://t.co/WB52fQRERy

What planet are these bootlickers living on? https://t.co/Rq3W8hn45P

This sycophantic royal reporting by the BBC is nothing new. But even by its low standards, Witchell’s appalling take disrespected child sexual abuse survivors everywhere.