Britain's political police had a file on Alexei Sayle. That's just the tip of the iceberg. - The Canary 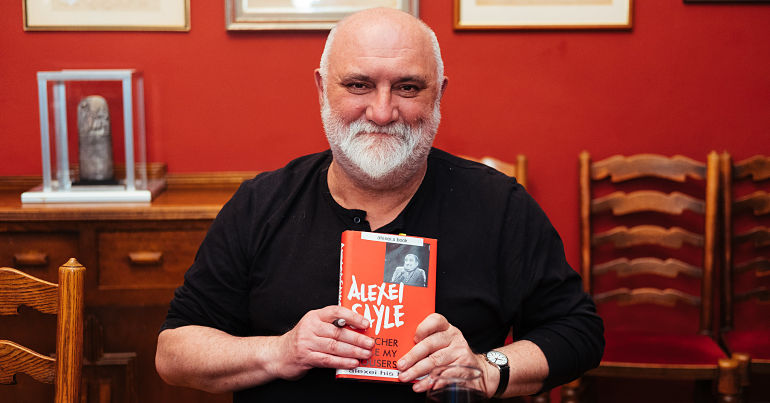 Actor and comedian Alexei Sayle was informed by a lawyer via email that he was named in a document by Special Branch (SB), Britain’s political police. In a podcast, Sayle discusses this matter further. Documents show that other well-known figures are named too.

The revelation shines a light on the sinister activities of undercover policing which took place over decades and are still a part of our lives.

Sayle had a Special Branch file

In his podcast, Sayle and lawyer Paul Heron discuss how the actor is named in an SB document. That document now forms part of the Undercover Policing Inquiry (UCPI). Heron is a lawyer with the Public Interest Law Centre (PILC) and represents a number of core participants to the inquiry.

Heron tells Sayle that Sayle was of interest to SB because of a gig he did in 1982 in support of the Right To Work campaign. He also says that an SB file was opened on Sayle.

The podcast also features Helen Steel, who is an activist and core participant in the UCPI. Steel goes on to explain how she was targeted by ‘John Barker’. His real name is John Dines, an undercover police officer with the Special Demonstration Squad (SDS), which was a “Special Branch Unit established in the late 1960s” and a unit of the Met police.

Dines formed a sexual relationship with Steel so as to provide cover for his surveillance ops.

The formerly classified SB document, now lodged with the UCPI, that names Sayle is stamped ‘Box 500’, the informal name for MI5. The document is a report into a planned Right To Work Campaign march and picketing over five days in London.

The document lists Sayle as part of the entertainment on the fourth night. It mentions Sayle again with others – including Attila The Stockbroker (a punk poet) – on the last two pages.

From the Beatles to ‘Lawrence of Arabia’ to CoE General Synod

Another SB document concerned the planning by London co-ordinators of the Troops Out Movement (TOM) for a rally. According to a submission by PILC, TOM argued:

that the withdrawal of the British military from Northern Ireland was an essential precursor to peace. They argued that the bombings, the sectarian murders, the carnage that blighted the lives of the people of Northern Ireland and Britain would not end until the British troops were out.

The SB document mentions that speakers invited to the rally included musician John Lennon and actor Peter O’Toole. It added, however, that Lennon declined the offer and O’Toole did not reply.

Yet another SB document concerns events in the north of Ireland. In this document, it’s noted that the reverend Paul Oestreicher agreed to participate in any “anti-recruitment campaign undertaken by the Troops Out Movement”. Oestreicher is a peace activist and member of the General Synod of the Church of England.

Others on MI5’s radar

Lennon had file too

A certain ‘Rick Gibson’ was referred to in the document about TOM. Gibson’s real name was Richard Clark – full name detective constable Richard Layton Clark. He was with the SDS and is now deceased.

Clark’s undercover work was audacious: to gain credibility, he set up and ran a branch of TOM. Furthermore, he “encouraged and organised demonstrations, such as the picketing of the local Woolwich barracks and the homes of local MPs”.

Clark also had sexual relationships with at least two women activists, including ‘Mary’, to provide cover for his surveillance operations. He eventually took up a position on TOM’s National Secretariat.

In the same document, Lennon is again mentioned, and this time it’s stated there was an SB file on him.

Clark went on to infiltrate Big Flame, but his false identity was revealed by activists.

The UCPI released a September 1982 SB report which also referred to a list of TOM subscribers who went on to become members. It was signed off by chief superintendent “HN68” (Sean Lynch) and copied to Box 500.

UCO “HN96” (aka Michael James) also infiltrated TOM and the Socialist Workers Party. He went on to become TOM’s membership and affiliation secretary.

In a submission by Heron and other lawyers to the UCPI, there’s evidence to show that a TOM branch member who wasn’t an undercover operative was possibly blacklisted. This branch member, Richard Chessum, was unable to obtain employment despite his qualifications.

The Economic League was an agency, funded by businesses, to hold files on workers so they can be blacklisted (deprived of work, usually because of trade union activism).

The Economic League’s blacklisting overlapped with the state’s domestic intelligence services. The most clear cut example of this common ground would be in MI5. …

We know, definitely that in the years before the Second World War the League supplied and received information from Special Branch and Naval Intelligence and that during the General Strike it was reporting to the Prime Minister.

The Reuben report into blacklisting also confirmed that UK Special Branches were in contact with the EL: 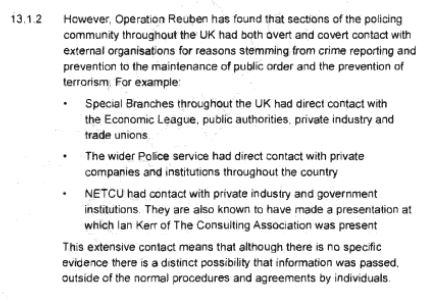 In 2013, the Independent Police Complaints Commission confirmed it was likely that “all special branches were involved in providing information” for blacklisting purposes. And in 2018, Met police admitted to collusion in the blacklisting of workers.

This celebrity was jailed then blacklisted

It’s also known that the SDS spied on trade union activists over decades.

Indeed, another celebrity who, in a previous life, was targeted by the police for picketing and was subsequently blacklisted was actor/comedian Ricky Tomlinson. He was sentenced to two years in prison.

In February 2021, The Canary reported on evidence that showed collusion between a Foreign Office funded research agency, MI5, a TV documentary producer and prime minister Edward Heath to ensure the conviction of Tomlinson and other pickets.

In 2014, it was estimated by the police watchdog that 1,200 undercover police officers had been operating across England and Wales. Also, Her Majesty’s Inspectorate of Constabulary revealed that a massive 3,466 undercover operations had taken place between 2009 and 2013 alone.

We are seeing history repeat itself, and the dark, sinister forces of the state and its agents in the police have not gone away.

*Author of this article was also a co-founder of League Watch.