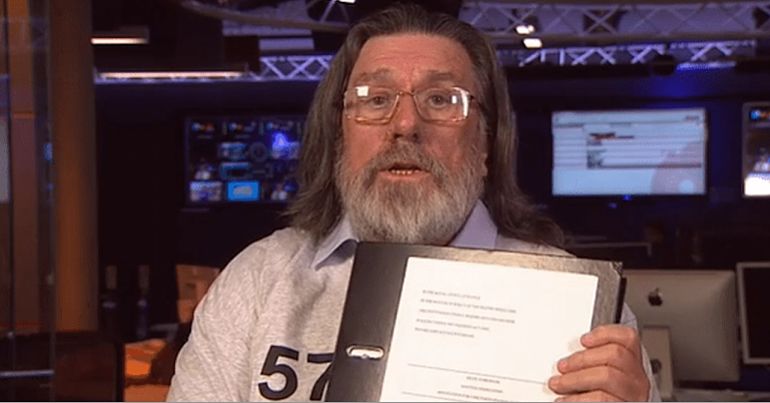 A court heard evidence backing claims that a spy agency, a secretive research unit and a prime minister intervened to secure the conviction of Ricky Tomlinson and other striking construction workers – for merely participating in a legal picket.

Then, in February 1973, 24 pickets were arrested and charged with a number of offences. They included “unlawful assembly, affray, intimidation, criminal damage and assault”. Three of those charged – Tomlinson, Des Warren, and John McKinsie Jones – were convicted and sentenced to two years, three years, and “nine months imprisonment respectively”. At his court hearing, Des Warren gave a powerful speech.

Now, fourteen of the pickets charged hope to overturn their convictions.

At the hearing of 3 and 4 February 2021, the defence asked the appeal court to consider:

2. New legal arguments relating to the screening of the TV programme The Red Under the Bed during the 1972 trial, and an analysis, applying modern standards of fairness, of the way the airing of the documentary was handled by the trial judge. The programme was highly critical of trade union organising.

Danny Friedman QC, who represents twelve of the pickets, argued “there has undoubtedly been material non-disclosure of the fact that statements were destroyed”. Meaning the original convictions were unsafe.

The role of MI5, IRD, and Edward Heath

Piers Marquis is representing Tomlinson and Arthur Murray. Marquis provided evidence that showed the Information Research Department (IRD) and prime minister Edward Heath had played a part in the production of the TV documentary Red Under The Bed. The documentary, produced by Woodrow Wyatt, included footage of the Shrewsbury pickets, and ITV broadcasted it on 13 November 1973. This took place as “the prosecution closed its case, then repeated in December when the judge, Chetwynd-Talbot, was summing up”.

According to Shrewsbury 24 researcher Eileen Turnbull, “the day after it [the documentary] was broadcast the pickets lawyers applied for Anglia TV and Woodrow Wyatt to be held in contempt of court but Judge Mais refused and the trial continued”. Marquis also told the court that “Industrial Research and Information Services Limited” (IRIS) provided background information to Wyatt for the documentary.

IRD, MI5, and the Department of Employment further recommended to Wyatt the services of journalist Simon Regan. This was despite Birmingham Police finding Regan’s 1972 newspaper series on the strike to be “completely fabricated” and “a figment of imagination”. Yet those findings weren’t made available to the court hearings that saw the convictions of the Shrewsbury pickets. And so also, Marquis argued, the convictions were unsafe.

Heath’s role: the evidence in black and white

In her research, Turnbull has unearthed a number of relevant documents from the National Archives Office. They provide evidence that the ‘secret state’ conspired in the prosecution of the pickets. The Canary published some of those documents in May 2020. A complete set can be found here or here (via a VPN).

Referring to one of those documents, Friedman told the court that then-prime minister Heath had said about the documentary, “We want as much as possible of this”. This was in response to a memo by his principal private secretary Robert Armstrong. 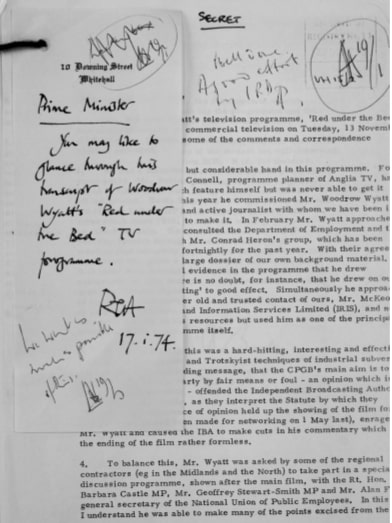 Another memo, which Armstrong wrote to John Hunt, reiterated Heath’s comments. It explained how Heath “has seen the transcript of Woodrow Wyatt’s television programme”. And how “he has commented that we want as much as possible of this sort of thing”: 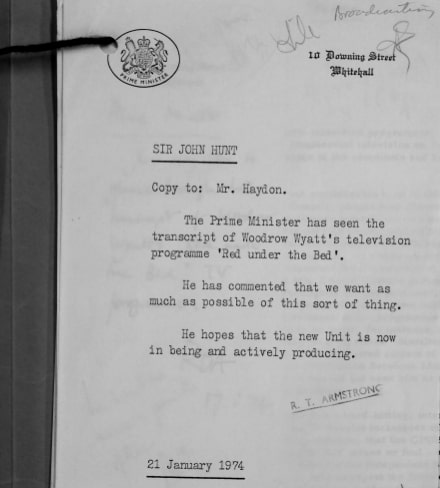 And a further memo from Hunt to Armstrong about the documentary again confirms that:

a good deal of discreet help was given to Mr. Wyatt in preparing this programme 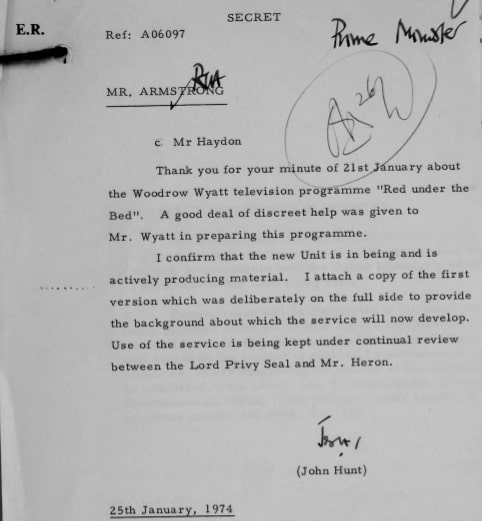 At the time, IRD was a “new unit operating in the Foreign and Commonwealth Office”. Reportedly, it was:

at the same time gathering evidence on allegedly subversive communist involvement in the trade unions, which it then passed to a television documentary, Red Under the Bed, which aired twice at crucial points during the trial.

Indeed, in the May 2020 article The Canary reported that another memo, dated 21 November 1973 and headed “RED UNDER THE BED”, is clearly from an IRD official: 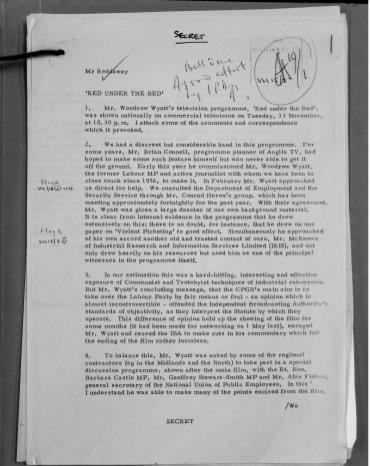 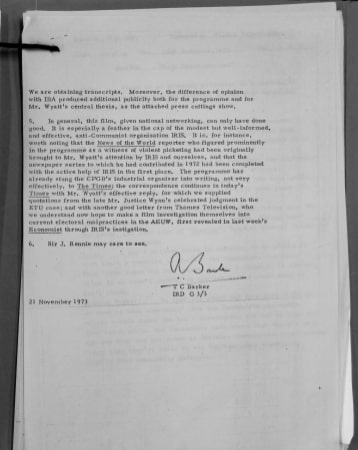 The memo refers to a broadcast of the documentary on 13 November. And it boasts about how the IRD had a “discreet but considerable hand in this programme”. It also states that IRD had been in “close touch” with Wyatt in the making of the documentary. The memo adds how IRD consulted with the Department of Employment and the Security Service to provide a “dossier”, including a paper on “Violent Picketing”, to Wyatt. Further, it acknowledges the help of IRIS, an “anti-communist organisation”. And it’s annotated with “Well done. A good effort”.

“Wyatt was part of a MacCarthyite anti communist cabal”

In March 2017, journalist Paul Lashmar referred to a Private Eye article that claimed IRD funded the documentary. And he described Wyatt, the documentary producer, as:

a key external link for IRD and the agencies what we call an agent of influence. He, like a number of establishment figures, was a director of news agencies in an international network of MI6/IRD covert operations.

Wyatt was part of a MacCarthyite anti communist cabal who would have seen any vigorous trade union activity as the work of Stalin’s fellow travellers rather than what was mostly the case the grievances of men working in a badly paid and highly dangerous industry.

According to a 1967 report by the Foreign & Commonwealth Office the IRD was originally set up in 1948 to oppose communism.

The arguments presented in this court paint a damning picture of the secret state and it’s manoeuvres against the National Builders Strike and more particularly the Shrewsbury 24.

It has been demonstrated today that the state was active in criminalising those picketing for better pay, health and safety. Such disturbing findings must be echoed and condemned throughout our country so that similar state efforts may not be deployed again in these times of austerity and hardship when struggles emerge. What occurred in the 1970s must not be allowed to occur today.

The convictions lead to blacklisting throughout the construction industry. There needs to be a statutory public inquiry into the events of Shrewsbury and the role of state agencies specifically, but such an inquiry must look at the issue of blacklisting in the industry in general.

Indeed, a number of the Shrewsbury 24 were unable to find work. They were presumably blacklisted by the Economic League (EL) or by its successor, the Consulting Association, which was forced to close down in 2009. It’s estimated that over several decades 40,000 workers were blacklisted by the EL alone.

Here’s an abridged version of Tomlinson’s own EL entry (giving his real name – Eric Tomlinson – and his date of birth):

Despite that setback, Tomlinson went on to become an actor in Brookside and the Royle Family, and in Ken Loach films.

Tomlinson: in his own words

In October 2016, Tomlinson spoke at a conference on undercover policing. He spoke about the Shrewsbury 24 prosecutions and in particular how his trial was rigged:

And in an interview with The Justice Gap, he makes it clear that the prosecution of the pickets was entirely political:

After hearing the evidence today, it should alarm every trade unionist, every socialist, and every campaigner. Indeed, every person in the UK must question how the secret state has used subterfuge, a secret strategy and dirty tactics to criminalise the Shrewsbury 24 – who were only guilty of striking for better pay and for better health and safety at work.

This is the secret state at work: anti-worker and hand-in-glove with the media. It happened then and it can happen again.

The appeal court’s judgement is yet to be given.