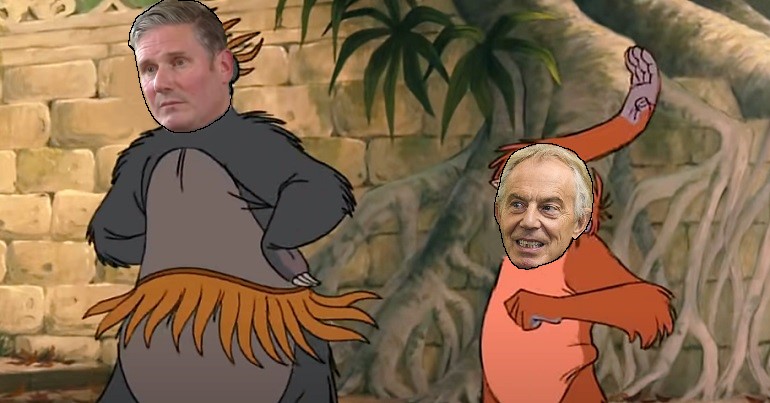 You’d be forgiven for thinking Tony Blair was back as Labour leader. Because a leaked email showed the party tacking towards an “unashamedly pro-business” position. But don’t worry. Blair isn’t in charge. It’s just Keir Starmer and his team clusterfucking, again: the ‘kings’ of the political ‘swingers’.

On Sunday 7 February, the Times wrote about a leaked internal Labour email. It was from Starmer’s director of policy Claire Ainsley. The email allegedly said that:

We won’t recover if the Tories raid family finances with universal credit cuts, forcing councils to hike up council tax or freezing key worker pay. But we also won’t recover if we just stand by as businesses go bust. To be the party of working people and their communities, Labour must be unashamedly pro-business to drive growth and opportunity in every part of our country.

The Times angled this as Starmer ‘resetting his faltering leadership’. But to be clear, the email is not policy. It’s merely the thoughts of a Starmer adviser. All the same, though, this ‘pro-business’, Blair-like line does little to end the notion that Labour is veering to a centre-right position.

If at first you don’t succeed…

Starmer’s problem is that this potential ‘pro-business’ mantra would be another in a growing line of rebrandings he’s done in the past few months.

Back in September 2020, Labour said Starmer ‘vowed’ to make the party one of “opportunity, family and security”. This was mixed in with comments about ‘patriotism’. Come January, his message had morphed into one of just “family”. We also had shadow chancellor Anneliese Dodds’ lecture on making Labour economically “responsible”. Now, Ainsley wants to push Labour to be the party of “working people”. Oh, and as well as being “unashamedly pro-business”, too. Overall, and as The Canary has repeatedly written, Starmer seems a bit Blue Labour: right-wing social values with left-wing economic policy.

So, what can we deduce from all of this? Is it that the Labour Party under Starmer will be the party of ‘opportunity, family, security, patriotism, working people, and business’? Who knows. And it’s that uncertainty which is part of the problem.

The Guardian reported that Labour has been dabbling in some focus group work. That’s where an external agency asks members of the public questions about the party. It then does a report into what the people have said, and the agency advises the party on what it needs to do to get the public to vote for it.

This latest research showed that the public didn’t know what Labour stands for. The Guardian said:

the party’s head of research said voters were confused about “what we stand for, and what our purpose is, but also who we represent”.

His slides featured comments from the focus groups such as: “I don’t know anything about the Labour party at the moment, they have been way too quiet” and “he [Starmer] needs to stop sitting on the fence”.

Oh dear. The agency thought that among other things, Labour needs a rebrand. The Guardian said it recommended:

The use of the flag, veterans, dressing smartly at the war memorial etc give voters a sense of authentic values alignment.

Again, this is not Starmer policy. But what it does show is that the focus group was on the money. Because neither Labour nor its leader have a clue what the party stands for anymore. Except that they seem to want to be aping the Tories.

The website Joe posted a now-viral video on 1 February. It mocked Starmer up as Baloo from The Jungle Book. He was singing the song I Wan’na Be Like You to Boris Johnson’s King Louie:

Starmer faces massive criticism for saying we can do things the same way as the Tories. But the criticism doesn’t come from the Tory press, because their billionaire tax-shy owners are absolutely comfortable with the prospect of a Starmer government, in the unlikely event of the Tories losing their 80 seat majority at the next general election.

It’s an unlikely event because Starmer isn’t cutting through [to the public]. If he can’t now, during this moment of unimaginable national crisis, he never will.

now we find the Labour Party thinking a flag, and a bit of out-Torying-the-Tories is the way to power in 3 years time.

Indeed – it looks like Starmer’s approach is to be a bit Tory while he works out what the public want him to stand for. This will not end well; much like Blair and the “Third Way” ended in tears for Labour – setting us on a path that has led us to Brexit, Donald Trump, and economic and social chaos. Starmer’s triangulating is not the answer. It will never resonate with a politically polarised public. Sadly, it seems that it’s all Labour now has to offer. So, instead of monkeying around with the party, it’s time for its supporters to swing elsewhere.