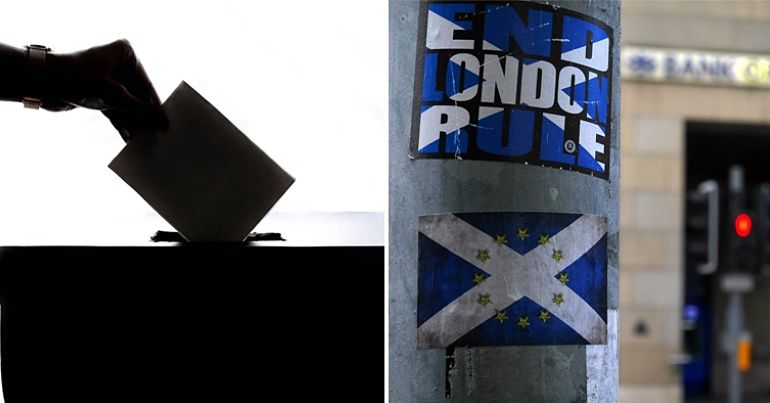 In the first part of The Canary’s #Independence2021 series, we caught up with Now Scotland, a new independence movement in Scotland. This series takes a weekly look at matters related to the upcoming devolved elections in Scotland and Wales on 6 May 2021.

This week we look at Scotland where the election is labelled “independence election”. There’s of course an independence movement in Wales too, whom we aim to speak to again in the coming weeks.

Our interview with Now Scotland shows the momentum for Scottish independence is only going in one direction.

The Canary spoke to economist and former SNP MP George Kerevan of Now Scotland. He outlined what the movement stands for and how they’ll fight this May’s election. But he was keen to point out that Now Scotland is not a political party, so it will not be standing candidates in the elections. Kerevan said the model for this movement was the Catalan National Assembly (ANC). They want to bring Scottish independence activists together to:

cooperate and work in a practical campaign direction

Kerevan said the organisation All Under One Banner (AUOB) held Zoom assemblies in 2020 to discuss this project. A steering committee then spent the last couple of months putting the infrastructure together.

On its website, Now Scotland explains its mission statement as:

In November 2020, The Canary spoke to Action for Scottish Independence (AFI). It said it wanted to deliver Scottish independence by only standing for the list positions.

Voters in Scotland have two votes. With their first vote, they elect one MSP from each of the 73 constituencies. These 73 MSPs are elected on a ‘first past the post’ basis, where voters put an X beside their preferred candidate. This is just like the voting system used in Westminster elections. Then with their second vote, they elect the 56 additional MSPs through the ‘additional member system’ (AMS).

For AMS, Scotland is also divided into eight parliamentary regions. Each region elects seven MSPs. These 56 regional MSPs are also called ‘list MSPs’. On the AMS, Scottish voters choose a political party, as opposed to their preferred candidate. They could also choose an independent candidate. These MSPs are then selected from lists compiled in advance by the parties.

But these list MSPs are not selected using the ‘first past the post’ system. They are selected using the D’Hondt formula. This formula selects list MSPs by adding up the total votes their party gets in the regional ballot and then divides that number by the number of MSPs that party has already won in that region, plus one.

the SNP will soak up most of the constituency seats… but because of that it will win very, very few of the regionalist list votes

clearly there are divisions within the SNP [Scottish National Party] over strategy, whether to simply rely on waiting for Boris Johnson to grant permission for a referendum, versus using the May election as a kind of plebiscite and then demanding independence.

The danger is at the moment that those debates are beginning to split the movement and get in the way of campaigning for independence. So, if we can find a way of uniting people in action through Now Scotland that means the debates can take place in parallel and in a civilised way

And support for Scottish independence continues to grow. Polls show the SNP is on course for a majority in this May’s elections.

But regardless of this support, even if it comes from Johnson’s handling of the pandemic, the PM refuses to grant Nicola Sturgeon’s request for a section 30 order. This section would allow Scotland to call another independence referendum.

As with Irish unity, the question of affordability comes up. The argument being ‘you can’t afford it so you can’t have it’. And the affordability of Scottish independence was further questioned in a report published by the London School of Economics (LSE) earlier this month. Among its findings that report said:

However, Now Scotland’s response was damning of this report. It said:

Regardless of Johnson’s eventual decision over section 30, the momentum is in favour of Scottish independence. The bizarre reality of Johnson’s refusal is that it’s his Brexit position and response to the coronavirus (Covid-19) that has accelerated this momentum. It’s also fuelling the independence drive in Wales. Welsh independence movement YesCymru told The Canary:

The Senedd [Welsh parliament] elections are very important. We expect Scotland to start taking steps towards independence by probably calling for a referendum. With that in mind, and the continual moves by Westminster under the guide of the Internal Market Bill, powers are going to be taken away from Wales. Wales therefore needs to have a government which has a concrete constitutional path to independence for Wales from Westminster.

A majority win for Scottish independence parties this May will only drive the movement further. So the question for Johnson may soon become ‘when’ and not ‘if’ he grants a section 30 order.