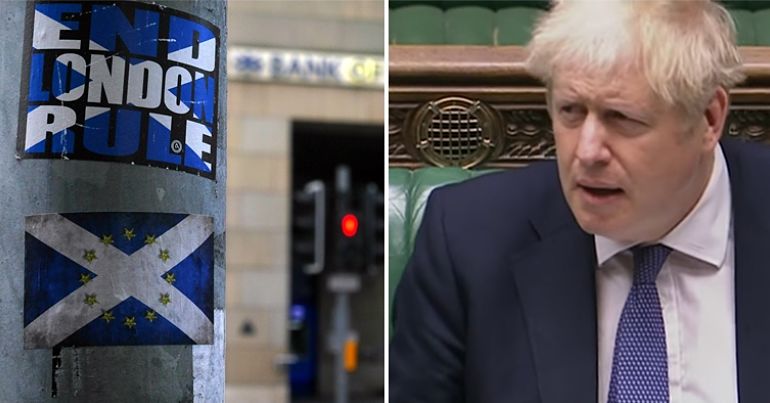 Despite the risk of a coronavirus (Covid-19) cancellation, devolved elections in Scotland are scheduled for 6 May 2021. The newly formed Action for Independence (AFI) has labelled it “the independence election”. And opinion polls appear to show support for Scottish independence is growing.

On 15 November, born out of frustration with Johnson’s handling of Brexit and coronavirus, Scottish National Party (SNP) Westminster leader Ian Blackford MP announced a second independence referendum will take place next year. So talk of Scottish independence was already high on the agenda.

But then Boris Johnson entered the fray to inadvertently give the pro-independence movement an extra bit of support. Because on a Zoom call to northern English Conservative MPs he reportedly said Scottish devolution had been a “disaster” and a “mistake”.

With this comment Johnson has once again shown his complete and utter contempt for democracy, and for the Scottish people, who voted overwhelmingly for devolution in 1997. His every utterance only helps ensure we will deliver a similarly strong verdict when next we vote on independence.

Grassroots campaign group for Scottish independence All Under One Banner said:

Boris Johnson has been a [disaster] for the Union

It’s called “democracy,” @RobertJenrick . If the people of Scotland continue to overwhelmingly elect a party of government that holds Scottish independence as its core driving principle, then you should not be surprised when that party pushes to deliver on its democratic mandate.

AFI wants to give Scottish independence a greater voice in the next parliament and it wants other pro-independence parties to join this campaign.

Tommy Sheridan’s Solidarity Party has already agreed to join AFI to fight next year’s election. This would “Max the Yes” vote, according to Solidarity, and make a second Scottish independence referendum in 2021 “inevitable”.

The newly formed group wants to “help deliver Independence” and it wants to “motivate the public out there to come out and vote for independence.” AFI formed:

to give YES, Indy groups and individuals a voice in Scotland’s parliament and to remove as many non indy msp’s as possible.

the best way to make our collective voice heard is to work together to make it happen.

Macpherson told The Canary that it was founded in February 2020 and hopes to soon be formally recognised as a political party.

There are currently 129 Members of the Scottish Parliament (MSPs) in Holyrood. The Scottish National Party (SNP) leads the minority government and currently has 61 MSPs despite winning 63 in 2016.

And it’s because of the SNP’s regional list vote performance at the 2016 elections that AFI believes pro-independence groups need a different strategy for 2021.

Voters in Scotland have two votes. With their first vote, they elect one MSP from each of the 73 constituencies. These 73 MSPs are elected on a ‘first past the post’ basis, where voters put an X beside their preferred candidate. This is just like the voting system used in Westminster elections. Then with their second vote, they elect the 56 additional MSPs through the ‘additional member system’ (AMS).

For AMS, Scotland is also divided into eight parliamentary regions. Each region elects seven MSPs. These 56 regional MSPs are also called ‘list MSPs’. On the AMS, Scottish voters choose a political party, as opposed to their preferred candidate. They could also choose an independent candidate. These MSPs are then selected from lists compiled in advance by the parties.

But these list MSPs are not selected using the ‘first past the post’ system. They are selected using the D’Hondt formula. This formula selects list MSPs by adding up the total votes their party gets in the regional ballot and then divides that number by the number of MSPs that party has already won in that region, plus one.

Macpherson told The Canary that while:

In 2016, the SNP only got four list MSPs out of a possible 56 on the AMS. And this was despite getting 953,587 list votes and almost 42% of the vote. Despite getting almost half of that vote, the Scottish Conservatives won 24 list MSPs. So anti-independence parties won an advantage. This is what AFI want to change.

How could AFI change this?

The outlook is currently favourable for pro-independence parties. But while the SNP could increase its constituency MSPs in 2021, it could also lose list MSPs. And while the predicted numbers still look good for the SNP, it could be a different scenario next May. And that’s the situation AFI wants to avoid.

Macpherson said AFI wants to avoid a scenario whereby pro-independence do so well in the ‘first past the post’ system that they hand an advantage to unionist parties on AMS. Despite that advantage, unionist parties would still not form a government. But, according to Macpherson, opposition:

gives them almost an equal status … a sort of false equivalence.

So, Macpherson believes AFI can be effective in furthering Scottish independence by only standing for the list positions. By doing so, and in winning the 24 seats its interim leader Dave Thompson believes it can win, AFI could become “the second largest grouping after the SNP.” This would make it “the official opposition” and help “push unionism further away from the mainstream”.

Therefore, with both opposition and government favouring independence, Macpherson believes this majority would “push for progress for second referendum” on Scottish independence.

Whether AFI can get more parties to support its call for tactical voting remains to be seen. But with more outbursts like this from an increasingly unsettled Johnson, it may just get that support.