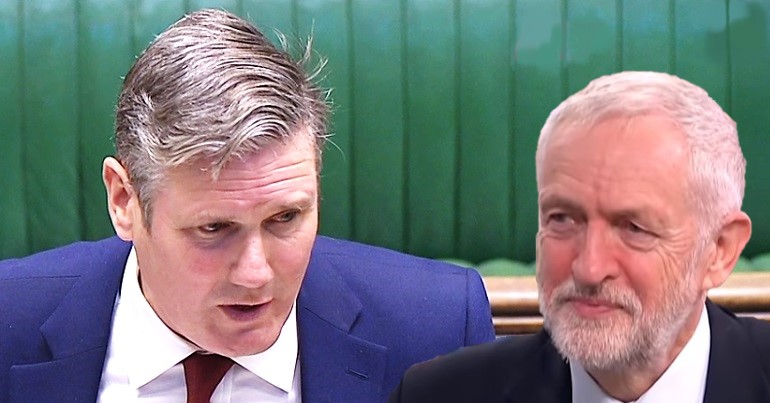 Talk about a misstep by Starmer. Because he decided to come out and say that he wasn’t giving Jeremy Corbyn the whip back right before PMQs. This came after Corbyn was first suspended, and then reinstated, by the party machinery over comments he made about the Equality and Human Rights Commission (EHRC)’s investigation into alleged antisemitism in the Labour Party.

Firstly, Starmer not giving Corbyn the whip back prompted a furious backlash from the latter’s supporters on social media. Former shadow chancellor John McDonnell was not happy:

This is just plain wrong & will cause more division & disunity in party. Jeremy’s gone through the formal procedures & decision has been made properly. I appeal to everyone that surely it’s time to move on & start working together to implement the EHRC. https://t.co/d851cLnFr4

This is the most farcical thing I’ve ever seen. He bends in the wind worse than a wind sock. Starmer is making Theresa May seem charismatic & a strategic genius. Corbyn should just sue the incompetent fool & form a new party! https://t.co/7CeNpk6I1u

Momentum has launched a petition:

Keir Starmer’s decision to remove the whip from #JeremyCorbyn is a joke. A disciplinary panel found that Corbyn broke no rules – so now Starmer is making it up as he goes along.

The Canary‘s editor-at-large Kerry-Anne Mendoza made an important point:

Who could’ve seen this coming?

Every left-wing commentator worth their salt. https://t.co/ojdBdNi57B

But it was Rachael Swindon who hit the nail on the head best:

Making it up as he goes along?

Secondly, there are procedural problems that Starmer may have caused. Momentum founder Jon Lansman pointed out on Twitter that:

The decision not to restore the whip to Corbyn just announced has driven a coach and horses through the party’s disciplinary process, making it subservient to the parliamentary party and embedding ‘political interference’. The whip was only removed because he had been suspended!

In other words, the NEC found that Corbyn had not breached party rules. So, Starmer technically may not have a right not to restore the whip to him. Or if he does, it raises serious questions about how the leader can override official party procedure.

Thirdly, many people are pointing out that this will create further division in the Labour Party. Red Labour tweeted that (edited for ease of reading):

Starmer’s decision not to restore the whip to Corbyn is vengeful, divisive and provocative. It is designed to put a wedge between socialists in the party and the PLP [Parliamentary Labour Party] and pick us off, one by one. Well, we have one message for Sir Keir: you have a fight on your hands.

Moreover, Starmer’s decision to announce he would not give the whip back to Corbyn raises serious questions about his leadership.

Media-wise, it reeks of opportunism and intentional bad timing. Starmer must have known that his decision would dominate social media across the entire day. He also must have known it would make the headlines. The Tory government has been repeatedly exposed as utterly (and maybe intentionally) negligent over the coronavirus (Covid-19) pandemic. So, you’d think the Labour Party would want that as its focus. But instead, Starmer has allowed a subservient Tory media to make the headlines about Corbyn.

Why would he do this? It could be appalling leadership. But Starmer surely isn’t that useless.

Maybe it’s because, as Robert Peston pointed out, Starmer is trying to embed his vision of the party:

Starmer is defining his leadership of Labour. It is his version of Tony Blair’s determination to abolish Clause lV

Yet in reality, all Starmer has done is to further split the party into its various factions; alienate supporters, and give the media a feeding-frenzy. Meanwhile, the Tory government is presiding over the gradual breakdown of UK society. Starmer’s priorities, and leadership, are wrong in so many ways.