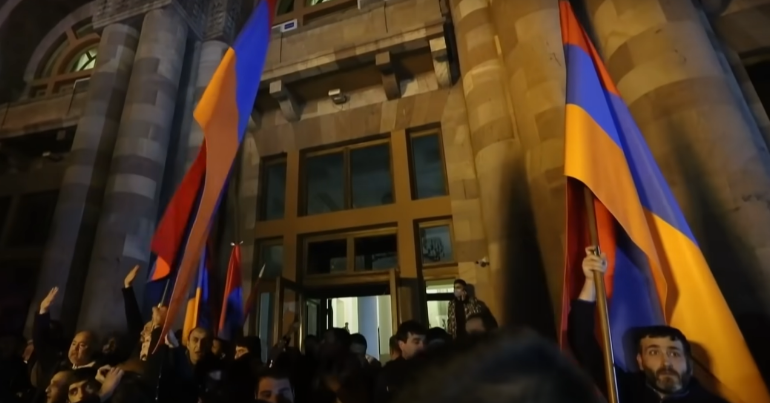 The peace deal between Armenia and Azerbaijan to end a six-week war has left many Armenians feeling betrayed.

On 10 November, Russia oversaw a ceasefire between the two countries. The terms of the agreement require Armenia to concede territory in the disputed Nagorno-Karabakh region to Azerbaijan. Around 2,000 Russian peacekeepers have also been stationed in the territory.

There were celebrations in Azerbaijan, but anger in Armenia. Hundreds of protestors stormed government buildings after the announcement, chanting that prime minister Nikol Pashinyan had betrayed them.

Nik Matheou, a historian specialising in Armenia, and an activist with the Kurdistan Solidarity Network and Boycott Turkey, told The Canary that Armenians “are distraught”:

It looks, and to a large extent is, a total capitulation, not only of all the territories outside of Karabakh proper which were taken in the first war in the 90s, but also of large sections of the core territory, most especially the symbolic city of Shushi/Shusha. In terms of whether they accept the necessity of the deal, this is of course very divisive.

Despite being internationally recognised as part of Azerbaijan, Nagorno-Karabakh is mostly occupied by Armenians. It has been ruling itself with Armenian support since 1991, after declaring independence as the republic of Artsakh.

Fighting broke out in the Nagorno-Karabakh region on 27 September, as both sides accused the other of starting the conflict. Turkey has provided military support to Azerbaijan in terms of forces and arms. Allegedly it also made decisions in terms of guiding drone attacks, though this has been denied.

Vladimir Putin said the war has killed thousands of people on both sides. The Armenian foreign minister said around 90,000 people have been displaced.

Moscow successfully brokered a ceasefire where several countries had failed. The agreement requires Armenian forces to retreat from Nagorno-Karabakh itself, as well as Lachin, Kalbajar, and Aghdam. Armenia will maintain access to Stepanakert through a travel corridor.

Territory Azerbaijan has regained includes Shusha (Shushi in Armenian), a culturally significant city for both countries.

Some Armenians have burned their houses in protest as they leave the region.

The deal brokered by Moscow has ended the fighting but leaves the region short of a clear and stable peace.

A deal that Armenians view as capitulation will not be a reliable foundation for more sustained peace. While it will be hard for them to accept it, steps should be taken to mitigate the blow and to prevent Azerbaijani overreach.

Analysts have said both Russia and Turkey will gain significant influence in the region through the peace deal.

For Turkey, the opening of a “direct link” between the bordering enclave Nakhchivan and mainland Azerbaijan will allow direct land access to Azerbaijan.

Russia will have control over this route and the corridor connecting Nagorno-Karabakh to Armenia. It will also have sole responsibility for the management of the ceasefire.

Despite Moscow being the only signatory of the peace deal, the war emphasised the growth of Turkish influence in the Caucasus region.

The last thing I’d want to say is just how sadly familiar this story feels seen in the context of the region’s history over the last century or so – both the south Caucasus in particular, and the Middle East more broadly. Once again we have the lives of people on the ground shattered by the games of regional powers, and the chance for any real solution able to take into account the profound violence and pain suffered by all sides.