From Karabakh to Kurdistan, Turkey is using 'the logic of genocide to assimilate a whole region' - Canary 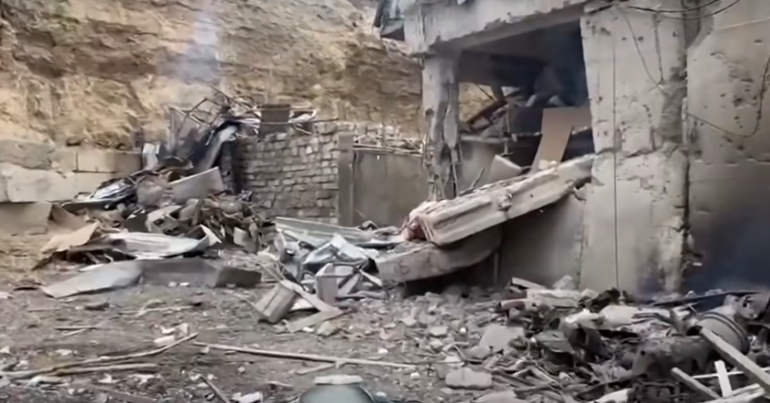 Turkey continues to fuel conflict on its borders, supporting Azerbaijan’s aggression in Nagorno-Karabakh, in an attempt to make domestic political gains. Karabakh – known as Artsakh to Armenians – is internationally recognised as part of Azerbaijan, but is mostly populated by Armenian people. Meanwhile, Turkey has carried out new attacks on the majority-Kurdish region of north-east Syria, aka Rojava.

Nik Matheou, a historian of Armenia and an activist with the Boycott Turkey campaign, explained Turkey’s motives behind the continuing aggression towards its neighbours:

The Turkish state in Armenia is continuing its strategy that we’ve seen really this entire year, which is to create a crisis every month in a different part of its border region – a crisis with one of its neighbours, highly militarised – and it seems significantly intended to play to an internal nationalist audience, to shore up its base, because the economy and COVID crisis in Turkey are going incredibly badly: the lira is at a new low of 8 against the dollar.

Drumming up anti-Kurdish and anti-Armenian rhetoric is nothing new in a country where its own president denies the Armenian genocide, and has threatened to “crush the heads” of Kurds. Recep Tayyip Erdoğan knows exactly how to appease the right-wing population and drum up nationalist fervour.

Conflict in Karabakh not seen since the 90s

Matheou explained that Turkey is supporting Azerbaijan in crucial ways:

Turkey is providing a level of support which means that we’ve got conflict in Karabakh that we haven’t seen since the war in the early 90s.

Because of the support of the Turkish state, the Aliyev regime in Azerbaijan feels secure to keep fighting going on as long as possible, and to attempt to make real territorial gains. And this support is… forcing the Russian state to be more circumspect in its interventions…

In essence, what the Turkish state is doing is fuelling an already intractable conflict for its own internal political reasons.

Turkey is providing key practical support to Azerbaijan by supplying it with weaponry, including Turkish-made rocket-launchers and Bayraktar drones. Arms sales to its Azeri neighbour rose “six-fold this year“, ahead of the aggression in Karabakh. It has even provided the Azerbaijan with financial assistance to buy weapons systems.

Turkey has also sent thousands of mercenaries to fight in the conflict. Matheou explained about the “transferral of mercenary fighters from one war zone to another”:

It is now a well-established fact that they are using Syrian mercenaries from groups like the Sultan Murad brigade in Northern Syria, like they previously did in Libya. These are now fighting on the ground with the Azeri forces.

It was reported that in late September, the first fighters were transferred from Syria to southern Turkey, and then onwards to Azerbaijan.

More than 50% of the Karabakh population is displaced

Armenia has alleged that Turkey has blocked much-needed aid from being flown over its airspace. Meanwhile, the death toll continues to rise, and a fresh ceasefire was violated just minutes after coming into force.

Both Azerbaijan and Armenia are under martial law right now, and more than 50% of the population of Karabakh is now displaced from their homes.

From Karabakh to Kurdistan

Meanwhile, on 20 October, Turkey continued its attacks on the majority-Kurdish autonomous region of Rojava in north-east Syria, launching drone strikes and killing two people. Foza Yûsif, a politician for the autonomous administration, has said that she suspects that “the Turkish state is preparing to attack our region once again”.

One year ago, the Turkish army launched a full-scale invasion of Rojava. Turkey and its extremist allies quickly faced accusations of ethnic cleansing and war crimes. And they displaced more than 300,000 civilians while killing at least 250. They also caused great destruction and misery in communities which had been at the forefront of fighting against Daesh (Isis/Isil) and which had been building a progressive, democratic revolutionary system in the middle of Syria’s brutal conflict.

Last year’s Turkish invasion was only the latest episode in a campaign of aggression which has lasted since the Arab Spring of 2011, and ensuing civil war. According to Kongra Star, a confederation of women’s organisations in Rojava:

The Turkish state has interfered in Syrian affairs since the beginning of the Syrian conflict on March 15, 2011, and the methods of intervention have developed and taken new forms over time.

Furthermore, Turkey plays [the] most destabilizing role in all conferences and attempts to solve the Syrian crisis… the Turkish state uses the pretext of ending the war to take control over parts of Syria, which they filled with armed jihadist militias acting as their proxy forces under their protection.

Turkey has been accused a number of times of funding and arming Daesh and other extremists in Syria. Kongra Star argues that:

There have been other groups formed directly under the supervision of the Turkish state to carry out measures of Turkification, ethnic and cultural genocide, demographic change and forced migration in the occupied territories. Moreover, these terrorist gangs have committed murder, rape, robbery, theft, destruction of land, uprooting of trees and burning of agricultural land.

As The Canary has previously reported, Turkey is terrified of the women’s revolution, not just in Rojava, but within its own borders too. In Turkey, women are continually targeted and arrested, while over 3,000 women have been murdered by men since the ruling Justice and Development Party (AKP) came into power.

In Syria, women are continually murdered by Turkey and affiliated groups. In 2019, Hevrîn Xelef was murdered by a “jihadist gang allied with Turkey”, while in June 2020, Zehra Berkel, Hebûn Mele Xelîl, and Amina Waysî were murdered by a Turkish drone strike in Kobanê.

Revolutionary women in Rojava are calling for support from other women around the world in their struggle against Turkish policies. Kongra Star states:

It’s calling on the international community to “break from their shameful silence about the crimes committed in Northern Syria”.

We call on the UN Security Council and the international community to force the Turkish state to withdraw its armed forces from Syria and to stop its attacks, as they break international law and endanger the security and stability of the region and the world.

Assimilating a whole region to “Turkishness”

Matheou explained how Turkey is using a “logic of genocide” to assimilate the whole region to a dominant “Turkishness”, from Karabakh to Kurdistan. He said:

We should be aware of the commonalities of the Turkish state’s role in this conflict [in Karabakh] versus its role elsewhere in Cyprus, Kurdistan and across the region. The Turkish state is looking as ever to assimilate identities to a dominant Turkishness that it defines – so the Azerbaijani population – and to expel violently those who can’t be assimilated. This is the logic of genocide playing out in its role in the conflict over Karabakh. And its the same logic of genocide that dominates its interaction with Kurds, who are either violently assimilated or killed. It’s also the same logic which dominates its interaction with Cyprus and the assimilation of Turkish Cypriots to a dominant Turkishness, and the expulsion and violence against non-Turkish Cypriots, and against Greeks and Armenians and Maronites.

So we should really see that there’s a common deominator here, and that’s the authoritarianism, ethno-nationalism, and, really, fascism of the Turkish state, in its interactions with populations beyond its borders and within its borders.

We really need to build a united struggle of all of the regions’ peoples – progressive Turks, Armenians, Azerbaijanis, Kurds, Greeks, Cypriots – everyone needs to unite against this Turkish state.

He says that the most obvious way we can support the struggle is to boycott the Turkish state and associated companies:

If we want to solve the constant cycle of conflicts in the region, then we need to boycott Turkey.

The most easy way to boycott Turkey is not to contribute to its tourism industry. If you do plan a holiday, book it elsewhere. Don’t fly with Turkish Airlines, which is half-owned by the state. You can also boycott specific Turkish brands such as Beko. Kurdish people around the world are calling for a boycott. Let’s listen to them.