Initial victory for student rent strikes. But concessions are 'nowhere near enough' - The Canary 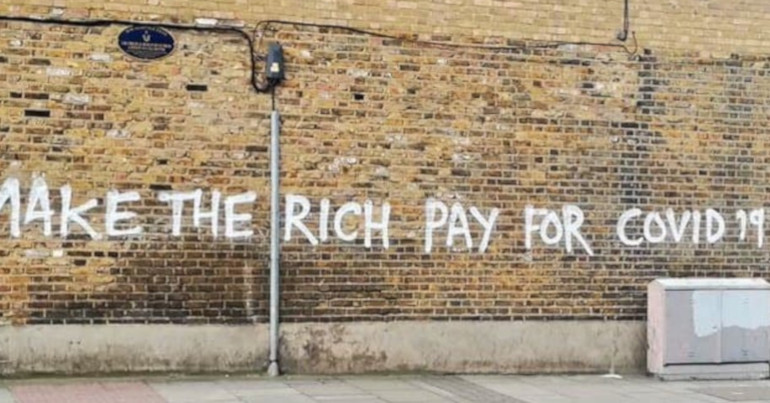 Striking students have won their first concessions from university management. But students are unanimous that the offer is not enough.

Most UK campuses have been open since September as universities want to keep the rent rolling in. However, students have become increasingly discontented.

Students at many universities in the UK are taking part in a rent strike, demanding a 30–40% rent cut for the whole year in the context of the continuing coronavirus (Covid-19) lockdowns. Rent Strike Bristol tweeted on 16 October that the “lives” of “students and staff” were being put “at risk”:

@BristolUni have put the lives of students and staff at risk by bringing students to halls, so we're calling a rent strike.
These are our demands ✊ pic.twitter.com/7VT2OVqpKh

There are concerns that universities are not living up to the promises made to students returning this September. An open letter from staff at the University of Bristol to the vice-chancellor stated:

students were encouraged to move to Bristol with promises of a blended learning experience that do not match the realities of what is safe and possible in this environment.

Students are now demanding not to be penalised if they want to be released from their contracts. According to Rent Strike Bristol:

The urgency of these demands is increased by the government recently announcing mass testing on campuses providing a six-day window allowing students to go home in December. The government requires a full transition to online learning from 9th December, giving students the option to stay at home. No-penalty contract releases provide a crucial opportunity for the University to simultaneously rectify the misleading of students and engage in a proactive COVID-19 response.

Across the UK students are finding themselves increasingly isolated by the social distancing demands on them.

Last week a fence was erected around student accommodation at the University of Manchester (UoM). Part of it was quickly torn down by angry students, and the University has now been forced to remove it entirely after public outcry. The university said that the fence was intended to stop non-residents accessing the campus.

The rent strikes at universities across the UK are beginning to bear fruit.

On November 16, students at Bristol University announced that they had been offered a ten day rent holiday by University management. But they maintain that the offer is nowhere near enough. Rent Strike Bristol tweeted:

The uni have notified students that they'll get a 10 day rent rebate for the first term.
We've seen our first concession from the uni so the strike is clearly getting to them, but it's nowhere near enough.
They cannot give a tiny concession and expect us to give in

Rent striking students at the UoM have been occupying a university building to put pressure on the university. UoM Rent Strike also reported on 17 November that management had offered them a 5% decrease in rent for the year. Rent Strike UoM called the offer “insulting”, and reaffirmed its commitment to hold out for a 40% cut in rent over the year:

This morning we were given an insulting offer of 2 week rent reduction (5%~) our demand of 40% remains the same.

The occupation will continue and the January rent strike will go ahead until this is rectified.

Our decision to provide a 10 day rent rebate for students living in University accommodation was in response to the Government’s directive for teaching to be moved online between 3 and 9 December, allowing time for students to travel home safely should they wish to. This mirrors the rent rebate we offered in the summer term, when teaching was moved online during the first national lockdown.

We have always pledged to act reasonably, reviewing our position as the national picture changes. Although students are facing some necessary restrictions to safeguard their health and the health of others, we have been as flexible as possible and believe we’ve gone above and beyond to provide support in these difficult times.

Strikers demanding an end to ‘intimidation by security’

Rent strikers in Bristol are also demanding an end to intimidation by security staff at the University in the context of the lockdown. According to the open letter:

there have been reports of intimidation by security services…

The staff who had signed the open letter fully endorsed “the strike’s additional demands” for:

Full transparency on the powers, role and actions of any security staff enforcing lockdowns in halls.

“We need to have a convo about racism in universities”

At UoM, students have accused security of racism. On Sunday 15 November, a video was tweeted of a Black student being stopped and assaulted by security staff, who claimed the student didn’t look like they went to the University. All Black Lives UK tweeted:

we need to have a convo about the racism in universities in the uk and the trauma it can cause students https://t.co/edzssj8ImT

UoM has suspended the security guards after the incident. However, UoM Rent Strike argued the suspensions are not enough to deal with this “systematic issue”:

Can’t even bring themselves to say sorry or issue an apology. This is a systematic issue you can’t sweep this under with a suspension. Management need to be held responsible. https://t.co/uqSZ20ucuV

“The most expensive prison”

Students also want the right to take exercise outside during the lockdown. In Bristol, students and staff are demanding:

students in locked-down halls to be guaranteed at least one hour of time outside per day (in accommodation courtyards, green spaces or other safe alternatives).

In Manchester, students have likened their campus to a prison, complaining about the police presence. They tweeted this video:

The most expensive prison. Having the police here to keep us in our cells tonight is such a draconian method. It certainly doesn’t help with mental health support. #uomrentstrike #ManchesterUniversity https://t.co/7BcLupNdVN

The student rent strikes are already beginning to win concessions. if they keep the pressure up it seems likely that UK universities will be forced to meet more and more of their demands.

It’s important that we don’t forget about students, who are being fenced off in their campuses and intimidated by security guards. They will need our solidarity if they are going to succeed in this struggle.