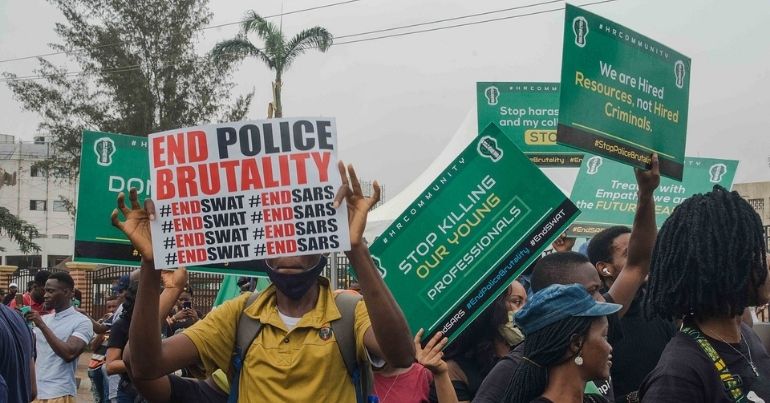 On 5 February, the Central Bank of Nigeria (CBN) sent a letter to the nation’s financial institutions reminding them that the government has banned dealing in cryptocurrencies or facilitating payments for cryptocurrency exchanges. According to the letter, failure to comply will result in “severe regulatory sanctions”.

The ban comes after widespread youth-led protests against police brutality and bad governance. These protests were largely funded through cryptocurrency such as Bitcoin, after the government allegedly stopped local payment platforms collecting donations in a move to suppress protests. Young Nigerians took to Twitter to call out the government for further suppression.

Government suppression of the youth-led movement

The movement against the Special Anti-Robbery Squad (SARS) rose to prominence in October 2020. This was after young Nigerians mobilised against police brutality, intimidation and extortion, and bad governance. The government disbanded the notorious police unit in response. The unit had been accused of harassment, extrajudicial killings, and other human rights abuses. However, police brutality continued even after the unit’s end.

The Nigerian government continues to cover up the tragic Lekki Toll Gate massacre, in which security forces shot and killed at least 12 peaceful protesters on 20 October 2020. Following the deaths of at least 51 civilians during protests in October, president Muhammadu Buhari claimed the violence was a result of “hooliganism“. The government has banned protests. According to Amnesty International, many movement leaders have been “arrested, tortured and had their bank accounts frozen”, while others have been compelled to flee into exile. The government’s recent move to ban cryptocurrency looks like another thinly veiled attempt to suppress the youth-led mass movement.

Young Nigerians took to Twitter, highlighting that the government used a similar tactic to block anti-SARS leaders receiving funds from across the diaspora in an attempt to suppress the movement. One Twitter user said:

Remember during #EndSARS protest, the nigerian government blocked us from receiving international transfers.
Jack came to our aid with crypto, CBN felt like a cool and so #Buhari. Now, they think they can get back at us
We can't be held back. Not again

According to another Twitter user, the government was supposed to allow anti-SARS movement leaders whose bank accounts had been frozen access to their accounts on 4 February:

By the way, the #EndSARS 20 bank accounts frozen by CBN 3 months ago were supposed to be unfreeze yesterday Feb 4th. Til this moment, our accounts are still frozen.

Victor Babatunde presented documents which seemed to show that these accounts remain frozen:

Mark Amaza highlighted the link between the Central Bank of Nigeria’s cryptocurrency ban and government attempts to suppress the anti-SARS movement:

It just occurred to me that there might be a connection between the new CBN policy on crypto and the #EndSARS protests.

As did JJ. Omojuwa:

It is impossible for one not to see a correlation between #ENDSARS and this desperate move by the CBN. pic.twitter.com/6uXMg5GeuW

Is the Nigerian government punishing its youth?

Many young Nigerians feel as though the government is looking to antagonise its politically active youth. And it’s trying to punish them for rising up against police brutality and bad governance. Even if this comes at the expense of the nation’s economy:

CBN Banned CRYPTO In Nigeria..
This shows that the government Is not fighting against corruption and poverty , it’s against youth being successful & liberated from poverty and
Nigeria government is really looking for every ways to frustrate the youth since #EndSARS protest

One user expressed their frustration at a government which refuses to acknowledge the killing of peaceful protesters and has failed to improve prospects for young people in the country:

No reasonable job opportunity for graduated students (all man for himself)

Now they want to take away crypto currency from us??

Please who did we offend in this country?😭

A symptom of bad governance

Performing artist DJ Switch highlighted that this is yet another symptom of bad governance in Nigeria. She called leaders “poverty promoting dinosaurs”:

If the ban on crypto by CBN is true ehn, it points yet again to the ill informed, backward, poverty promoting dinosaurs 🦖 leading us. Use your time ⌚ to investigate and close accounts sponsoring terrorists in the country if you don't know what to do!!! GAWD 🤦🏾‍♂️#endsars 🚶🏾‍♂️

An opportunity for further harassment

Others suggested that the cryptocurrency ban will provide another excuse for the country’s heavy-handed security forces to harass and persecute young Nigerians:

The Nigerian government has just legitimized a reason for security forces harassment/profiling.

• Finding any Crypto app or trading app on your phone.#EndSARS

Omojuwa highlighted the significant impact this policy is likely to have on Nigeria’s already struggling economy:

The biggest opportunity by far, for wealth creation for Nigeria and especially its young population, is embedded in the thinking, technology and innovation behind cryptocurrencies and its appurtenances. Someone is desperate to ensure this poverty lasts through this century! pic.twitter.com/7QpqCWtSTm

Meanwhile, activist Reno Omokri highlighted that though this will be blow to the economy, it won’t dampen the youth-led anti-SARS movement:

How can you shut down a money market like cryptocurrency, that brings in tens of millions of dollars into your economy at the time when you are in a recession, and need every penny you can get? @MBuhari cant stop another #EndSARS by making Nigerians even poorer#BuhariTormentor

Though the Nigerian government is unlikely to confirm the connection between the banning of cryptocurrency and the suppression of anti-SARS protests, this does look like an attack on Nigeria’s youth. And this move is highly unlikely to assuage young Nigerians’ dissatisfaction with, and resentment of, a corrupt, incompetent government.