The left eyes victory as Ecuador goes to the polls - Canary 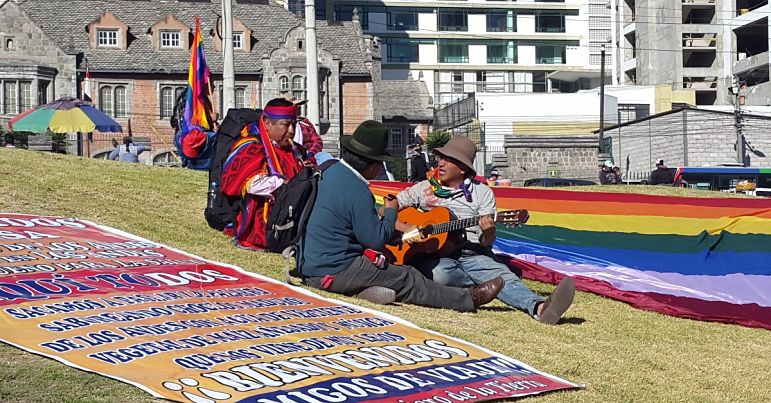 On Sunday 7 February, Ecuadorians go to the polls to elect a new president and National Assembly. Ecuador has been gripped by an economic crisis amidst an “erratic and negligent” response to the coronavirus (Covid-19) pandemic. And socialist candidate Andrés Arauz looks poised to win – if the process is free and fair.

Socialist candidate Arauz, a protégé of former Ecuadorian president Rafael Correa, leads most polls. To win in the first round, Arauz needs to gain either a clear majority of over 50%, or win over 40% of the vote with a difference of at least 10 points with the next most popular candidate.

Arauz has vowed to reverse economic and health turmoil in Ecuador by giving US$1,000 to one million of Ecuador’s poorest families.

The socialist candidate’s key opponents are Guillermo Lasso and Yaku Pérez. Lasso is a banker who listed Margaret Thatcher “among his heroes”, while Pérez’s left-wing credentials are betrayed by his support for coups across the region and his willingness to prioritise trade deals with the US.

The election has already been mired in controversy. Arauz was almost kept off the ballot, while the sitting administration used “lawfare” to jail political opponents and prevent Correa from having a direct role in the process. Correa, however, is ever-present on the streets:

One striking feature of the mass rallies in Quito and Guayaquil apart from immense energy is the enduring presence of Rafael Correa and his image in the anti-neoliberal movement. The attempts by CNE to ban the use of his image by the campaign of Arauz only inspired his supporters pic.twitter.com/cIxlBMP3qw

There have also been early reports of voting irregularities. Officially accredited observers have reportedly been prevented from entering voting stations.

Moreover, CEDATOS, the firm which will broadcast exit polls on Ecuador’s top TV network, has a history of corruption. And it’s also linked to right-wing candidate Lasso.

Moreno was elected to follow in the path of Correa. But he swiftly diverted from this course by courting International Monetary Fund (IMF) loans and cosying up to the US government. Many Ecuadorians also lament Moreno’s betrayal of Julian Assange. This was after Moreno allowed British authorities to enter the country’s London embassy in April 2019 and arrest the WikiLeaks founder.

In this documentary published by The Grayzone, Ecuadorians talk about regaining their “dignity” after a period of economic and social decline:

What happens in Ecuador today will have repercussions across the entire region.