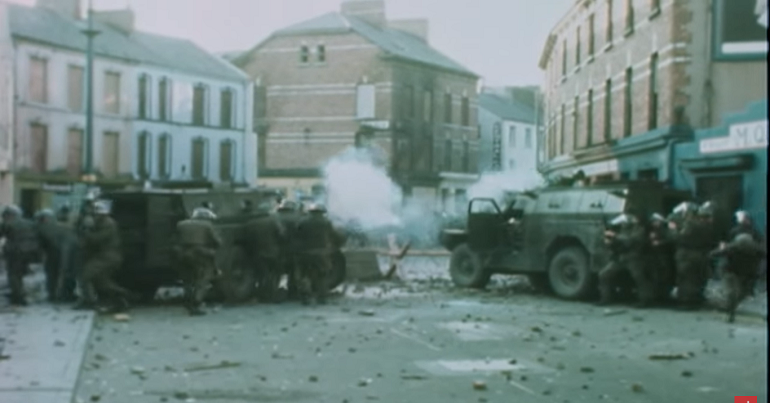 Evidence has emerged that suggests the Ulster Volunteer Force (UVF), one of the three loyalist paramilitary organisations that have withdrawn from the Good Friday Agreement (GFA), colluded with the Ulster Defence Regiment (UDR) and MI5 in killings.

The evidence relates to the murder of three IRA volunteers as well as a civilian. The IRA volunteers were John Quinn, Malcolm Nugent and Dwayne O’Donnell, and the civilian was Thomas Armstrong. UVF reportedly took responsibility for the killings, which took place at Boyle’s Bar in Cappagh in March 1991.

In December of that year, three part-time members of the UDR were arrested on suspicion of involvement in the murders. Another man who was related to one of the UDR men was detained too, but no charges were made.

Now, a British army document has come to light. It not only provides information on how the UVF attack was executed but also the weapons used. The document further states that the murders were “professionally carried out”. In particular:

From investigation of the scene it was found that the groupings of the bursts of fire were quiet [sic] exceptional for a PPM [Protestant paramilitaries] shoot and the targets had been well acquired.

This new evidence was first revealed by the Irish News:

Thanks to .@irish_news for comprehensive report on Cappagh collusion and killings pic.twitter.com/qLnal7LPbJ

The Belfast Telegraph states that a report has been handed to the victims’ relatives. The report, drafted by the Historical Enquiries Team (HET) on those killed at Boyle’s Bar, says that:

in the months after the killings three serving UDR members were named in intelligence reports as being responsible [for the killings].

It further states that a “possible MI5 link involvement was also raised”.

Phoenix Law lawyer Gavin Booth represents the families. He commented that this disclosure is “the first time a state report confirms collusion” in the Boyle’s Bar murders.

It’s worth highlighting that there are many other instances of collusion or interaction between the UVF, and other loyalist paramilitaries, and British intelligence and armed forces.

According to a lengthy exposé in Village, these include:

In a July 2016 article, The Canary revealed a restricted document that provided evidence of the UK government’s collusion with paramilitary organisations in the north of Ireland. The document consisted of testimony by Ian Hurst, an FRU agent, who also went by the name Martin Ingram.

Then in November 2018, The Canary reported on another example of collusion involving the Glenanne gang, which:

was made up of members of the RUC, a former police force in Northern Ireland; the UDR, a British Army regiment; and the UVF, a loyalist paramilitary group. It was centrally involved in the murder of over 120 innocent civilians between July 1972 and the end of 1978. The group also took its murderous campaign south of the border.

And in December 2020, The Canary reported on the 1971 McGurk’s bar massacre, when 15 people were killed and more than 16 were injured. The article reported that author and activist Ciarán MacAirt revealed files showing:

the name of the UVF’s original target that evening and showed there was a nearby British army presence that evening also. Moreover, MacAirt claims his revelations connect General Frank Kitson [British general who authored ‘Low Intensity Operations’] to the atrocity.

Meanwhile, the UVF, UDA, and Red Hand Commando – all proscribed terrorist organisations – are continuing to pressure the UK and EU on matters related to Brexit. And going by the UK government’s track record for duplicity, it’s doubtful whether it can be trusted to be on the right side of history here.