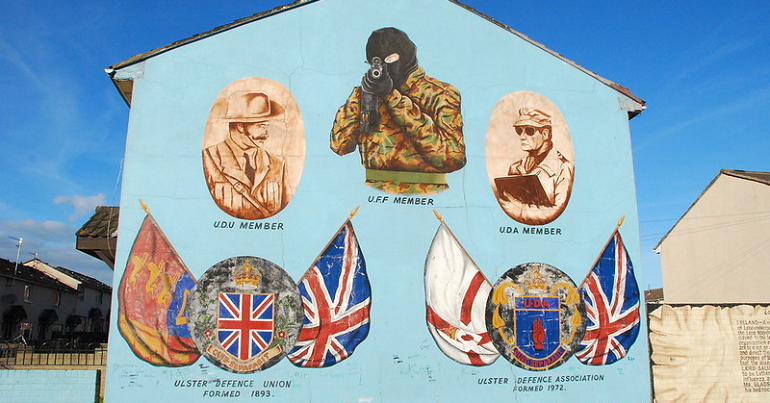 Loyalist paramilitaries have withdrawn support for the Good Friday Agreement (GFA) as long as UK and EU stick with an unamended Irish Protocol. But behind this move lies, possibly, an even greater threat to peace on the island of Ireland and potentially beyond.

In an earlier article in The Canary by Joe Glenton, it’s reported that a letter to Johnson by the Loyalist Communities Council (LCC) states that the Loyalist Groupings are:

herewith withdrawing support for the Belfast [Good Friday] Agreement and its institutions until our rights under the Agreement are restored.

The full text of the letter is included in this tweet from journalist Allison Morris:

That LCC letter sent to Boris Johnson withdrawing support for the Belfast Agreement, the language is very different from what we’ve heard previously, this may well be seen as a negotiating tactic but is still a very concerning and potentially destabilising development pic.twitter.com/NYosNysGWT

The letter adds that the withdrawal from the GFA will stand until the “Protocol is amended to ensure unfettered access for goods, services, and citizens throughout the United Kingdom”. Moreover, the letter states that “the triggers detailed in Article 16 of the Protocol… must be acted up without further delay”.

Threats by unionist gangs against politicians

According to the Irish News, it’s understood that the LCC wrote the letter to Johnson:

as part of attempts to appease hardline factions of loyalism who wanted to escalate opposition to the protocol into direct action against politicians and political offices [emphasis added].

If loyalist gangs decide to escalate to “direct action against politicians and their offices”, what form could that take? Indeed, earlier in February LCC chair David Campbell ominously stated:

If it comes to the bit where we have to fight physically to maintain our freedoms within the UK, so be it.

PSNI Chief Constable Simon Byrne commented that he considered the remarks as “inflammatory”. Though Campbell claimed the quote had been taken out of context.

Moreover, graffiti giving UK cabinet minister Michael Gove’s address and saying “We do not forget. We do not forgive” has been daubed in the Sandy Row area of Belfast.

DUP also has blood on its hands

Nor should it be forgotten that the Democratic Unionist Party (DUP) has a long history of association with paramilitaries.

For example, DUP founder Ian Paisley set up the unionist militia Third Force. Former DUP leader and co-founder Peter Robinson “was an active member of Ulster Resistance”, the activities of which included smuggling “arms to the UK, including RPG rocket launchers”. In 1986, Robinson led hundreds of members of the Third Force in an “invasion” of the small village of Clontibret in County Monaghan, across the border. In that same year, Paisley and Robinson addressed a rally for Ulster Resistance in Ulster Hall.

Then in 1987, Ulster Resistance combined with the UVF and the UDA in a weapons smuggling operation that included 200 assault rifles and ammunition. The rifles were used in:

the murder or attempted murder of about 70 people in Northern Ireland. In the early 90s, they were used in three massacres: gunmen stood at the doors of a bookmaker’s shop and two bars, and simply sprayed the room. Nineteen people died and 27 were wounded.

In 2009, DUP MP Willie McCrea was challenged about his links to the UVF leader Billy Wright in 1991 and 1992. This was at the height of a sectarian murder campaign in Mid-Ulster.

As for the LCC, it issued a statement shortly before the 2017 general election urging voters to back DUP and Ulster Unionist candidates in four battleground constituencies.

On 25 February, a week before LCC’s letter to Johnson, north of Ireland first minister Arlene Foster met with the paramilitary ‘umbrella’ body to discuss the Irish Protocol.

It’s essential that not only the border between north and south Ireland remains as invisible as possible, but that the government finds a workable solution to the flawed Irish Protocol. Otherwise the deal with the European Union will flounder, and the UK-US trade deal could be in jeopardy too.

This is a mess of Johnson’s own making. He now needs to ensure the GFA is restored without delay – but not by appeasing loyalist paramilitaries.