As the Tories abandon the fishing industry, local Scottish communities are leading the way - Canary 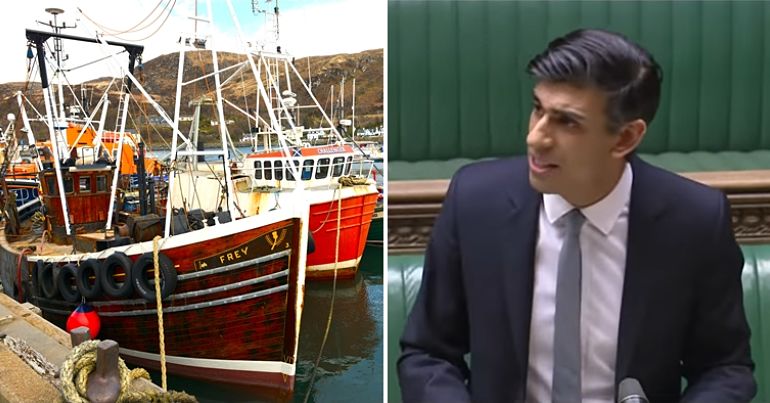 Despite Johnson’s bluster during the final days of Brexit negotiations about ‘taking back control’ of British waters, the UK fishing industry is enraged by his deal with the EU. And Scottish fishermen are particularly angry about it. Because even Rishi Sunak’s £300bn budget ignored Scottish fishing.

But while most of that talk focuses on big business, it’s smaller fishing communities in Scotland who are leading the way. And that lead could be one that’s sustainable for people in these communities and also their wider environment.

Scottish fishing abandoned by the Tories

When the ink dried on the Brexit deal, it was clear the damage it had done to Scottish fishing. Exporting from the UK to the EU has become so complex, it’s actually more beneficial for some Scottish fishermen to sell their catch in Denmark.

The creel fishermen proposed separate spaces for static (creel) fishing and mobile fishing. Static fishing is where fishermen leave their pots on the seabed for days. Creel fishing also has a lower carbon footprint. They claim:

Creel fishing is a profitable, species-selective and environmentally sustainable form of fishing with very little by-catch. Target species are brought to the surface alive and undamaged, meaning that egg bearing ‘berried’ females or undersized animals can be returned to the sea.

Mobile fishing, on the other hand, through trawling and dredging the seabed, can damage the water’s natural habitat. Yet the Scottish government opposes the creel fishermen’s proposal.

A recent documentary – Iorram (Boat Song in English) – focuses on fishing in the Outer Hebrides. And this documentary could have revealed something really important. Because it shows what it believes to be a connection between the Scottish Gaelic language in small fishing communities and environmental sustainability.

Roughly 75% of fishermen there speak Gaelic. And as they speak the language at work every day, they pass it on to another generation of speakers. And through this language, according to the documentary, local fishermen continue a knowledge of the seas that nobody else possesses. They can locate fishing grounds through the use of nature and local landmarks. As a local fisherman put it:

Nobody else has that knowledge

Even the old crofters don’t know those

Creel boats account for a large part of Scotland’s inshore fishing fleet. According to the Conversation:

Scotland’s inshore fleet fishes within 12 miles of the coast and makes up around three-quarters of all Scottish fishing boats. Almost 90% of these are small, two-person creel boats.

And the research uncovered through Iorram shows that local fishing knowledge helps to continue a tradition of sustainability.

The fishermen know which parts of the sea to leave untouched during spawning season. As one of them explained:

Fishermen aren’t going to cut their own throats

In addition to the government attacks on fishing and sustainability, small communities in western Scotland are facing depopulation. If we want to keep these communities together, and in a way that’s environmentally sustainable, there are lessons to be learned from the creel fishermen and Gaelic speaking communities. And we should be paying attention.