This SNP claim may be electioneering, but it highlights the deplorable state of UK pensions - Canary 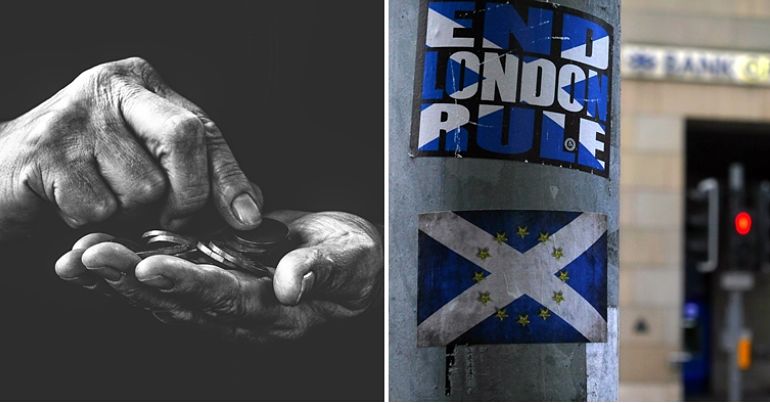 Believe in Scotland (BiS) is a website that aims to answer questions about Scottish independence. And as reported on its website, the Advertising Standards Authority rejected unionist demands that BiS remove its billboards about UK state pensions. The billboard advertisements claim the state pension could double in an independent Scotland:

As Westminster’s campaign to save the union has stalled amid bitter internal feuds key developments are keeping the independence momentum on track.

Here are three big steps keeping us on the road to independence.https://t.co/QZf1iAUoFg#BelieveinScotland #Yes #Indyref2 pic.twitter.com/9wcYsb9UkK

These billboards highlight an uncomfortable truth for unionists. In 2017, the Guardian reported an OECD study that showed the UK had the “lowest state pension of any developed country”. And now, according to this 2019 OECD research, the UK state pension is still among the lowest in the world. So low, in fact, that some people might have to live off 28.4% of their pre-retirement earnings. The OECD system:

Countries such as Denmark, France, and China pay at least 70% of pre-retirement earnings. Argentina, Italy, and India all pay over 90%. So if the claim of ‘doubling pensions’ sounds outlandish, then that’s a reflection on the payment, not the claim.

SNP candidate for Dumbarton Toni Giugliano made a similar claim about the state pension. Giugliano said:

Keeping pensions low is a political choice. The UK Govt keeps them so low it forces people into taking private pensions. In turn this boosts the profits of the City of London. And those who can’t afford them end up in poverty. It’s a disgrace.

With independence and the full economic levers available to us we can begin to increase our state pension gradually – with the aim of reaching the EU average over a period of time.

And Giugliano made an even bolder boast in a newspaper advertisement claiming: 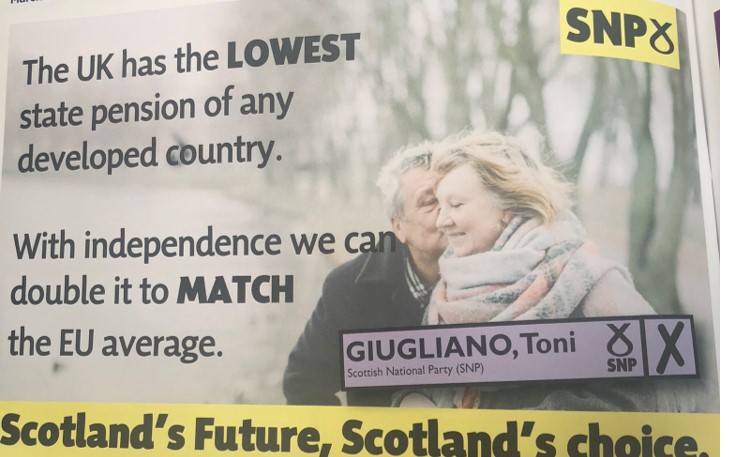 And while this could well be electioneering ahead of Holyrood’s “independence election” on 6 May, it underlies the deplorable state of UK pensions.

Back in the headlines again

And it’s not the first time pensions have entered the Scottish independence debate. During the last referendum campaign in 2014, former prime minister Gordon Brown used pensions to argue against independence. Brown argued that Scottish pensioners would be financially better off in the UK. However, BiS argues:

It was a disgraceful Better Together campaign tactic in 2014 to tell pensioners that their miserly low UK state pension was at threat from independence when in fact the risk of reduction is now far greater because we remained part of the UK.

Changes to the UK retirement age have resulted in some people feeling ‘too young to retire, too old to work’. And while there can be intrinsic reward in working after retirement, that’s usually if it’s by choice and not necessity.

According to 2017 research, about 15 million people in the UK don’t have a pension. So post-retirement, they could be facing a bleak financial future or having to work out of necessity.

The importance of a good pension

Getting up early, returning home late, and spending time away from loved ones can take its toll. And while this pandemic may have reduced some commutes, it hasn’t reduced the hours spent at work or worrying about work. So there can be comfort in knowing, one day, you will retire. But how much comfort is there in a retirement that pays less than a third of previous earnings?

Maybe Scottish independence won’t change that immediately. But this current debate does highlight how people’s retirement has been badly neglected by successive Tory and right-wing Labour governments. A much newer approach is sorely needed.