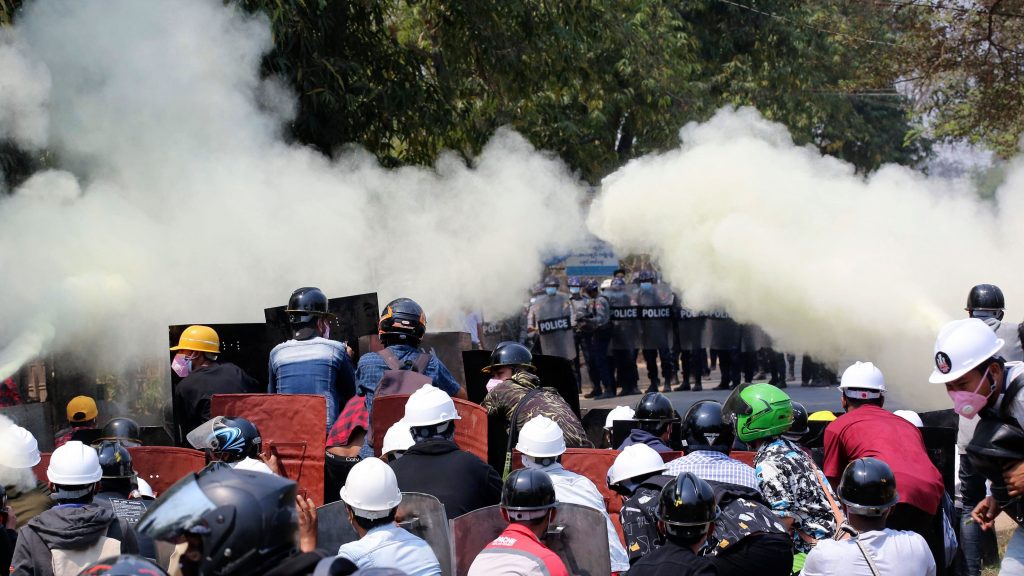 Security forces have shot dead two people in northern Myanmar,  as the military government continued its attempt to stamp out opposition to its February 1 coup.

The Irrawaddy newspaper said the victims were shot in the head during anti-coup protests in Myitkyina in Kachin State.

Graphic video on social media showed protesters in the street backing away from tear gas, responding with rocks, then fleeing what seemed to be automatic gunfire.

Demonstrators hurriedly carried away a number of casualties, including one apparent fatality, a person who had clearly sustained a severe head wound.

A second body was seen a little later, on a stretcher, his head covered with a cloth.

Security forces also clamped down on anti-coup protesters elsewhere on Monday 8 March. They fired tear gas to break up a crowd of around 1,000 people demonstrating in the capital Naypyitaw.

The protesters deployed fire extinguishers to create a smoke screen as they fled from authorities.

Meanwhile, thousands of protesters marching in Mandalay, the country’s second-largest city, dispersed on their own amid fears that soldiers and police were planning to use force to break up their demonstration.

Large-scale protests have occurred daily across many cities and towns in Myanmar since the country’s military seized power. And security forces have responded with ever greater use of lethal force and mass arrests.

The coup and its violent aftermath have led foreign governments and international organisations to impose measures against Myanmar’s military leaders.

In the latest example, Australia suspended its defence co-operation with Myanmar. It’s redirecting humanitarian aid in the country, and announced late on Sunday that it has suspended a defence training programme with Myanmar worth about 1.5 million Australian dollars (£830,000) over five years.

Australian humanitarian aid will be directed away from Myanmar government and government-related entities.

Instead it will focus on the immediate humanitarian needs of the poorest and most vulnerable people in Myanmar, including the Rohingya and other ethnic minorities, foreign minister Payne said.

On Sunday, police reportedly arrested hundreds of people involved in protesting against the military takeover.

In Myanmar’s largest city, Yangon, gunshots from heavy weapons rang out for a second night in several neighbourhoods after the start of an 8pm curfew. The sounds of what apparently were stun grenades could also be heard on videos posted on social media.

It seems that security forces used such weapons after protesters had left the streets as part of a strategy to strike fear in anyone who might think about defying the authorities.

In a similar vein, many videos are emerging of police and soldiers in plain view savagely beating protesters they had taken into custody.

Some of the shooting happened near hospitals, where reports said neighbourhood residents sought to block the entry of police and soldiers.

Members of the medical profession launched the Civil Disobedience Movement, which is the nominal co-ordinator of the protests, frequently hailed on demonstrators’ signs by its CDM initials.

Taking over hospitals is a move which would allow the authorities to easily arrest wounded people presumed to be protesters.