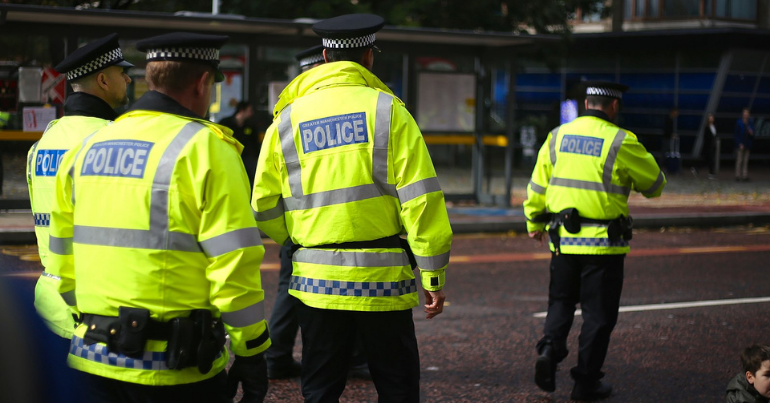 Police have fined the organiser of a nurses’ protest in Manchester £10,000 after shutting down the demonstration against the NHS pay rise.

The protesters gathered in Manchester city centre on 7 March said officers told them they would be fined for violating coronavirus (Covid-19) restrictions if they didn’t leave.

Unison maintained that the protest, against the government’s 1% pay rise for NHS staff, was safe and socially distanced.

Police said about 40 people attended the demonstration in the centre of Manchester, organised by a 61-year-old NHS worker.

Another NHS worker, 65, was arrested after initially refusing to leave or provide details when police broke up the demonstration. She was later de-arrested and fined £200.

Unfortunately the police have told us we can’t proceed with this despite what’s going on in the health service.

We’ve been told we will not be able to go ahead with this, I’ll be fined and reported to my employer and disciplined and people here will be fined as well, so we will therefore be shutting it down.

I think we’ve made the point we wanted to make, we sent a message to the government. I think it’s outrageous that somehow this is deemed illegal when the size of the crowd here will be ten times bigger in hundreds and thousands of schools tomorrow morning.

This isn’t about safety, this is about the government trying to stamp down on protest which I think is a dying shame. The health service will lose out.

There has been widespread outrage over the Department of Health and Social Care’s recommendation that NHS staff receive only a 1% pay rise.

NHS Providers said the long-term funding plan for the NHS, set out by the government, had assumed a pay rise of 2.1% for 2021-22.

The Royal College of Nursing is supporting members who want to strike following the pay rise. It has set up at £35m industrial action fund. Unison has also urged people to protest outside their houses on 11 March at 8pm by doing a slow clap.

Labour has argued the pay rise amounts to a “real terms cut”, and some Conservative backbenchers have also criticised the proposal.

Public gatherings have been banned under lockdown restrictions, but some have raised concerns that the right to protest may be under threat as the UK returns to normal.

According to Netpol, the government is seeking to amend the Public Order Act in 2021. Netpol said the proposed changes could lead to increased police powers to control protests.

It called for the protection of the right to protest, citing evidence from 25 campaign groups that were overwhelmingly in favour of stronger protections on protests.