The BBC faced backlash over its reporting on the violent police response to the Clapham Common vigil for Sarah Everard. And on the same day, it also put out some appalling coverage of an attempted assault on a child. Now, its coverage of the Andrew Marr Show has just compounded the issue.

Serving Metropolitan Police constable Wayne Couzens, 48, is charged with kidnapping and killing Sarah Everard. The 33-year-old marketing executive went missing while walking home from a friend’s flat in south London on 3 March. Her body was found on 10 March.

In response, the group Reclaim These Streets organised a vigil. It was due to take place on Saturday 13 March. After a court hearing and objections from the Met police, however, the group cancelled the official vigil. But crowds of people still turned up to remember Everard at Clapham Common. The vigil was livestreamed. And this meant tens of thousands of people witnessed the police violence against unarmed, peaceful women.

The media has widely reported this. But a BBC headline put the emphasis on the women being at fault.

As SKWAWKBOX reported, the BBC put out this headline just after 9pm on 13 March: 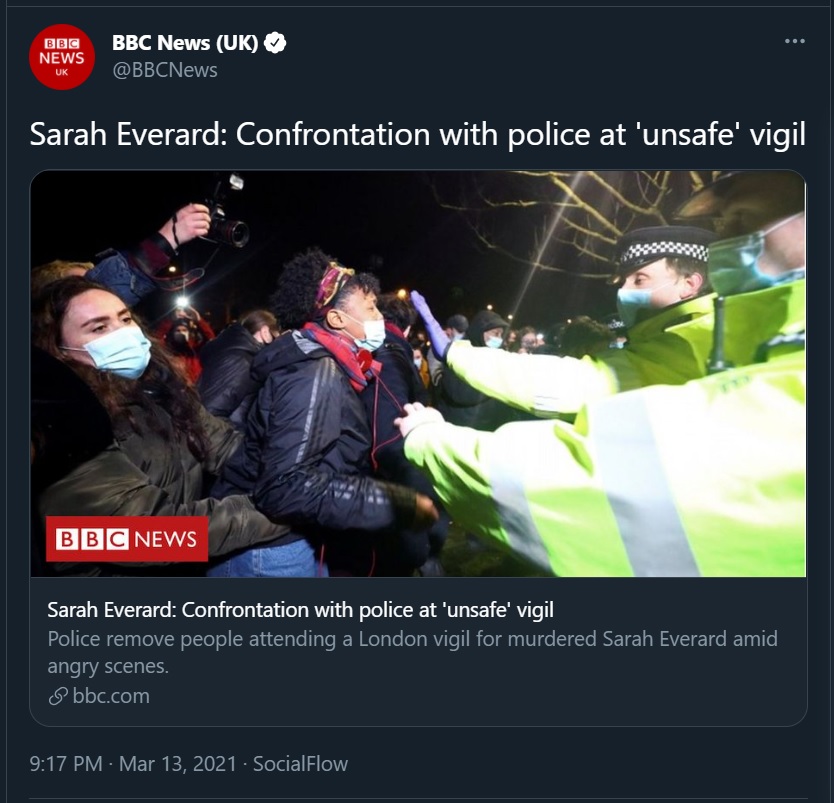 The implication of this is that the vigil was wrong and that those there confronted the police. That looks a million miles from the truth. What is the @BBCNews doing promoting ‘fake news’? https://t.co/Z2zgDPDJam

This is a pretty tame report for what actually happened. @metpoliceuk officers attack women attending peaceful vigil. Would be more accurate. #ReclaimTheStreets

The initial headline clearly framed the women as the antagonists. And the BBC had already done something similar on 13 March, in another story about violence against women and girls.

Police are trying to find a man who attacked a teenage girl as she walked along a path in Derby.

Teenage girl headbutts man after being grabbed on path https://t.co/7bNrvEzNFv

Here, the headline frames the girl as the aggressor. Writer Erica Buist broke it down:

The active verb in this headline is the headbutting; but the sexual assault she was defending herself against is described in the passive. Almost as if the grabbing just happened, like a natural disaster. No need to focus on the perpetrator, move along now https://t.co/cRpYYsDnnz

To make matters worse, the BBC managed to compound the issue even further.

Labour’s shadow minister for domestic violence and safeguarding Jess Phillips was on Marr. The host asked her at one point if she thought Met chief Cressida Dick should resign. Phillips said:

I came here this morning to talk about violence against women and girls; about the names of all of those women, as well as Sarah Everard. And I’m ending up talking about Cressida Dick.

But as people pointed out, the BBC chose to frame the issue around Dick and the Met:

So Jess Phillips tells #Marr she's there to talk about Sarah Everard and violence against women and not to give headlines to Met Commissioner.
And what is the headline from @BBCPolitics ? https://t.co/3K0kkYBQSA

And again, the BBC played down police violence:

'Scuffles and arrests'? Fuck you. The police were kettling peaceful vigil-goers. https://t.co/4HrS9K3LCS

It’s difficult to offer an explanation for the BBC‘s coverage of events this weekend. Repeatedly framing women as antagonists or aggressors cannot be a mistake. Playing down police and male violence can’t be, either. Many journalists, including at The Canary, are trained to write in the so-called “active voice”. As Grammarly says:

The “subject” in the BBC‘s coverage should have been the police at Clapham Common, and the male attacker in Derby. But they weren’t. So, it’s hard not to conclude that journalists at the BBC are intentionally doing this; firstly in the case of the vigil, and secondly over the teenage girl.

Framing news coverage not only to protect the police but also to make women the aggressors is appalling. It only furthers the notion that the BBC is in no way a ‘public service’ broadcaster. It also points to entrenched misogyny in its output. And ultimately, it shows the BBC‘s MO of protecting the state, whatever the cost.