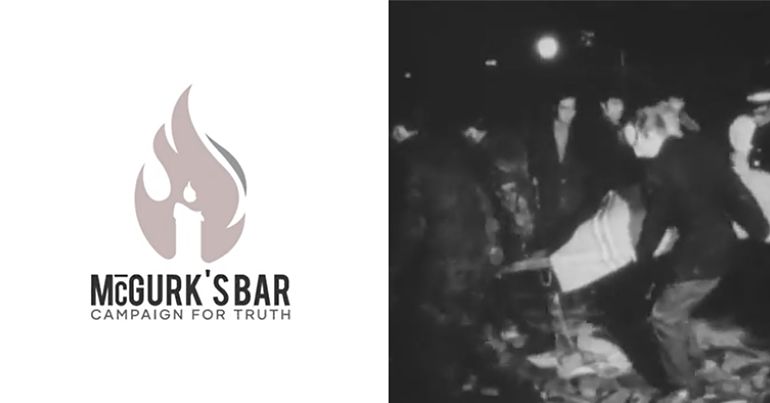 The British loyalist Ulster Volunteer Force (UVF) blew up McGurk’s bar in Belfast on 4 December 1971. It murdered 15 innocent people and injured more than 16. This bombing occurred in the early years of the 30-year conflict in Ireland. British authorities blamed the IRA, claiming the bomb detonated prematurely en route to its intended target.  But campaigners claim that this assertion was a lie.

As the 50th anniversary of that massacre approaches, victims’ families have launched a new website. The website commemorates the dead, those who survived, and their families. Since the bombing, those families have continued to fight for the truth. And in the lead up to the anniversary, they will be “publishing critical new evidence and articles”.

The Canary is exclusively revealing some of that evidence that shows a British army commander lied about his knowledge of the bombing in a newspaper article just two weeks after the incident. Campaigners claim this is the first instance of that commander lying about the McGurk’s bar bombing.

The site also includes work from award-winning Belfast artist Sinéad O’Neill-Nicholl. The artist started a sound installation project where she’s recording “the lived experiences” of the families in the aftermath of the massacre. O’Neill-Nicholl’s project is called Never the Same. The installation, at the site of the explosion, currently features:

16 short recordings of the families’ personal memories around grief and loss, which visitors can listen to whilst at the McGurk’s Bar memorial.

Ciarán MacAirt is a justice campaigner and grandson of two of the McGurk’s Bar victims. He called O’Neill-Nicholl’s work “an innovative sound installation”. MacAirt will be revealing “new evidence” about the bombing on this site. He said:

Unfortunately, the new website is a timely reminder too that our Campaign for Truth is ongoing even after 50 years, as the British authorities – including the Office of Police Ombudsman, Police Service Northern Ireland, Ministry of Defence and Cabinet Office – are withholding evidence from our families to this very day. We will prove this over the coming weeks.

Some of this evidence relates to what lieutenant general Harry Tuzo knew about the bombing. Tuzo was general officer commanding (GOC) of the British Army at that time. In a newspaper article on 20 December 1971, Tuzo said he was 98% certain the bomb went off inside the pub. In that article, Tuzo speculated that it was unlikely:

anybody not known to the denizens [regulars] of that pub could have got in with a parcel under his arm.

Therefore, Tuzo’s statement implicates the people inside the pub in the bombing. 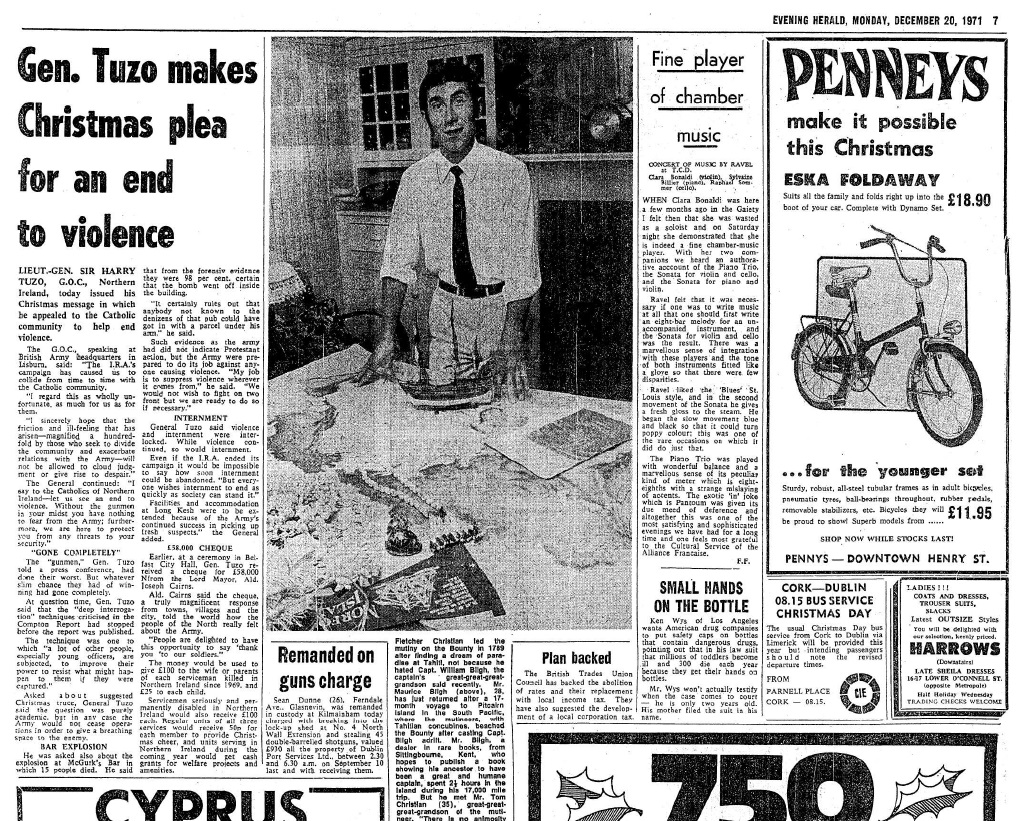 What we already know

The website shows previously seen secret documents that indicate British armed forces knew the bar had been attacked from outside. Additionally, it suggests brigadier Frank Kitson colluded with local police to tell lies about the bombing and to conceal the truth.

Indeed, as reported by The Canary in August 2020, MacAirt uncovered new files that revealed the name of the UVF’s original target. The files also showed that there was a nearby British army presence that evening. Moreover, MacAirt claims his files showed a connection between Kitson and the atrocity.

a high-level, coordinated and sustained Security Force and Civil Service plot to deceive the Parliaments of Britain and Northern Ireland about the true circumstances of the McGurk’s Bar Massacre.

Now, MacAirt has exclusively revealed to The Canary that some of this new documentation implicates GOC Tuzo. Because just four days before his statement in the above newspaper article, he attended a security meeting in Stormont just outside Belfast:

They discussed the McGurk’s bar bombing at this meeting. Notes on the meeting state:

Campaigners claim this is a lie. In fact, on the 49th anniversary of the bombing, they had challenged police to prove that the bombing victims were IRA members. They say they’ve yet to get a response. And as previously reported by The Canary, MacAirt alleges the British army and the RUC colluded “just a few hours after the bomb explosion” to blame the victims for the explosion. They labelled it “a republican own-goal”. A British army log stated:

RUC have a line that the bomb in the pub was a bomb designed to be used elsewhere, left in the pub to be picked up by the Provisional IRA. Bomb went off and was a mistake. RUC press office have a line on it – NI should deal with them.

But the British knew where the bomb was planted

According to MacAirt, all of this could have led to security forces misinforming Tuzo. However, in 2009, MacAirt uncovered information that showed Tuzo had been informed the bomb was planted outside the bar and not inside:

A bomb believed to have been planted outside the bar was estimated by the A.T.O. to be 30/50lb of HE (high explosive)

Then in 2016, MacAirt and his legal team uncovered a Headquarters Northern Ireland log from December 1971. This revealed proof that officers examined the bomb site the following morning and informed Tuzo’s Headquarters on the morning of 5 December 1971:

ATO [Ammunition Technical Officer] is convinced bomb was placed in entrance way on ground floor. The area is cratered and clearly was the seat of the explosion.

MacAirt said the authorities had always told the families they hadn’t discovered the probable seat of the explosion. But this was not the case. Because the ATO’s report, which had first gone to Kitson’s Brigade Headquarters, read:

As far as can be assessed from the damage and the crater by the expl[osion]… the bomb was placed on the ground floor entrance on the corner of the building that faces into the junction.

The British Army and its leaders including Lt. General Sir Harry Tuzo and Brigadier Frank Kitson knew that the bomb was placed outside the bar and the bar was attacked. They knew that the innocent victims were not to blame.

So, when Tuzo offered his Christmas message at the press conference on 20th December 1971 and he spoke about the McGurk’s Bar Massacre, he was lying.

Lt. General Sir Harry Tuzo is as much in the frame for the cover-up of the McGurk’s Bar Massacre as his subordinate, Frank Kitson.

The truth will not remained buried

The project organisers believe the Never the Same project will inspire other families in Ireland and the UK who wish to commemorate the loved ones they lost during this 30-year conflict. The launch comes as Northern Ireland secretary Brandon Lewis is planning an amnesty from criminal prosecution for British military personnel. This amnesty would also apply to loyalist and republican paramilitaries who fought in the conflict. That amnesty would take effect if Lewis’s plans become law.

Long before the government proposed this amnesty, campaigners believed British authorities had never been forthcoming with the truth behind Britain’s involvement in the conflict. And as MacAirt added:

It is horrific to consider that before we buried our loved ones on cold days in December 1971, the British state buried the truth.

This new website, along with MacAirt’s relentless and thorough investigative work, shows that whatever attempts the British employ to bury the truth, campaigners will continue to uncover it.