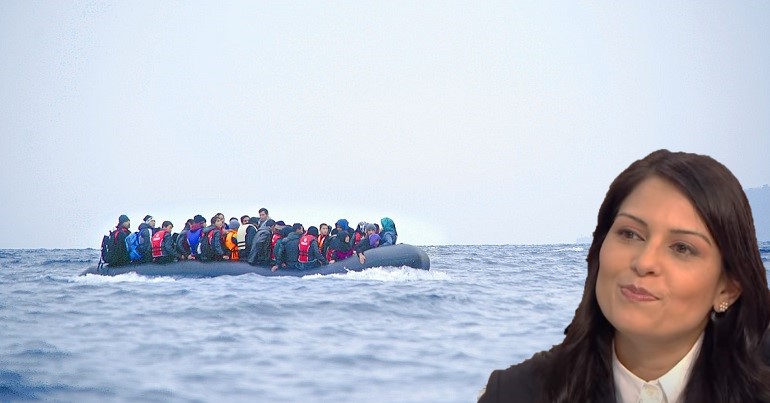 As people are dying trying to reach the UK via the English Channel, one tweet sums up the toxic attitude and policies of the Tory government:

This panic over the number of refugees coming to Britain is quite selective pic.twitter.com/pi64oF0z86

Dying in the Channel

27 people died on Wednesday 24 November while trying to cross the Channel in a dinghy. As BBC News reported, those who drowned:

included 17 men, seven women – one of whom was pregnant – and three children

The UN said it was the largest loss of life in the Channel since it began monitoring the situation in 2014. Yet the Tory government’s toxic narratives surrounding refugees continues.

For example, the Home Office has refused to rule out using “pushback” techniques to stop people crossing the Channel. This would be where agencies like the UK Border Force would send boats back mid-voyage to France. Charities and a trade union have launched a legal challenge against the government over this policy. PCS Union boss Mark Serwotka told the Guardian:

The pushback policy being pursued by the home secretary is unlawful, unworkable and above all morally reprehensible.

The Tories are seemingly indifferent to the suffering – even engaging in a blame-game with France. And one tweet from an independent journalist sums up the situation perfectly.

This panic over the number of refugees coming to Britain is quite selective pic.twitter.com/pi64oF0z86

Miller shared a screengrab from a Wall Street Journal article from January 2021. It’s headline was:

This is the story that the UK has set up a visa scheme for people from Hong Kong, due to China’s actions in the area. As BBC News noted, the visa scheme will offer them

and their immediate dependents… a fast track to UK citizenship.

Technically the Hong Kong residents seeking British citizenship aren’t refugees, because they haven’t left their home nation. Like with actual refugees, though, it’s true they’re leaving because of persecution. Figures on the right argue that migration is acceptable in the case of Hong Kong citizens who follow the government’s preferred procedures, but unacceptable in the case of refugees who do not.

The Tory government, for example, has repeatedly accused people crossing the Channel of doing so ‘illegally’. The problem with their argument is that under international law, people have the right to enter a country in order to make an asylum claim. This means people from Afghanistan and Syria have as much right to physically seek asylum in the UK as Hong Kong residents have to apply through other means.

The Times reported that 88,800 people from Hong Kong had applied for UK settlement by 30 September. For context, according to BBC News over 25,700 people had come to the UK via crossing the Channel in boats.

So that means the number of people from Hong Kong wanting to live in the UK is 346% higher than those coming via the Channel. Moreover, in the year ending June 2021 there had been a 4% fall in the number of people claiming asylum in the UK. But of course, that’s not how BBC News framed it. Its headline said:

It took the BBC until the eighth paragraph of the article to say that overall asylum applications had fallen by 4%.

The ‘right kind’ of “migrants”

Of course, at the heart of this situation is the Tory notion that asylum-seekers from Hong Kong are acceptable yet those from other countries are not. There’s also the convenience of vilifying China in offering refuge to Hong Kong residents. Home secretary Priti Patel said of people coming to the UK from Hong Kong:

Safeguarding individuals’ freedoms, liberty and security is absolutely vital for those individuals that go through this process

Yet she and her government are not affording the same decency to people crossing the Channel to get here. There’s no good reason why both groups of people should not be allowed to easily apply to live in the UK. One group is no more deserving than the other of being free of persecution.