Thugs beat up activists, and foxes are torn in two. This is the reality of fox hunting. - Canary 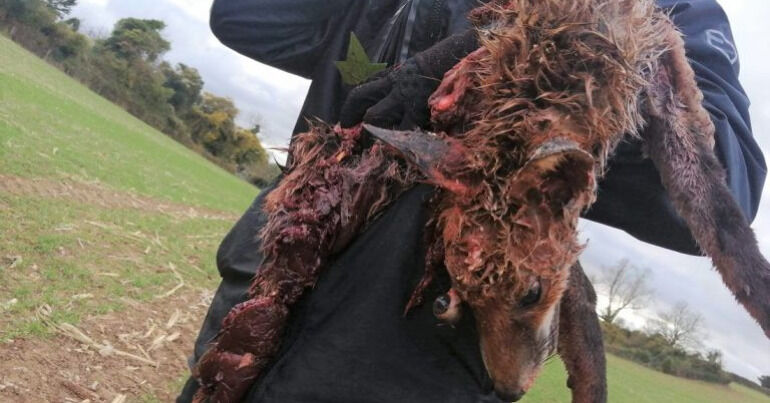 Animal lovers across England should be celebrating right now, as the National Trust has declared that it will finally ban fox hunting on its land. But despite the good news, November has been a brutally violent month. Foxes have been murdered across the country, while the activists trying to save them have been physically assaulted and hospitalised.

Northants Hunt Saboteurs and Hertfordshire Hunt Saboteurs – who are activists on the ground trying to stop illegal hunting – were beaten up at the weekend while trying to prevent a hunting meet from taking place. They say that they were targeted by “masked thugs” and that:

Sabs were assaulted from the start, one being punched in the side of the head and knocked to the ground and was then kicked in the head whilst down. Another sab was repeatedly assaulted and punched in the face as he held his ground.

All sabs present were subject to serious threats of violence in the field. Being forced back to the road sabs were knocked to the ground but refused to be marched away.

The activists went on to say:

One sab, who had earlier been hit in [the] head, began to feel unwell and it was decided [they] needed to go hospital. Sabs called an ambulance and waited… within a short while hunt thugs…arrived and again assaulted sabs in and outside their vehicle with one female sab being pulled out of the vehicle.

The saboteurs say that the thugs stole the keys from their vehicle, as well as two camcorders. Camcorders are used by activists to film illegal fox hunting activities, as well as assaults like this.

As awful as this was for the activists, it is, unfortunately, nothing compared to the brutality that has been inflicted on foxes this November.

Distressing footage from Weymouth Animal Rights on 13 November shows a fox being ripped up by hounds, while another fox was torn in two. Activists say that they managed to save two more foxes from the same fate that day.

Meanwhile, Devon County Hunt Saboteurs published a different video of a fox being torn up by hounds, while their activists on the ground filmed another incident of a dead fox’s body being carried to a quad bike to be used as a trail for hounds to follow.

These are just a few examples of the incidents that hunt saboteurs witness across the country, week in, week out.

A small victory, but there’s still a long way to go

On 25 November, the National Trust finally announced that it would ban hunting on its land. The decision was made after a top fox hunter was convicted for encouraging others to hunt foxes under the guise of ‘trail hunting’. Trail hunting is when packs lay an artificial trail for hounds to follow, instead of chasing a real fox. But activists have known for years that real foxes are consistently hunted and murdered on National Trust land.

Finally the National Trust have made the decision they should have made years ago and banned the hunts from their land. The lie that is ‘trail hunting’ is well and truly over and this should prove to be a momentous day when it comes to finally ending the cruel and barbaric pastime of fox hunting for good.

Natural Resources Wales has also banned trail hunting on its land, as has the Malvern Hills Trust. But a number of land owners, including the Ministry of Defence, haven’t. In fact, the MoD is still handing out licenses to hunt. As the Hunt Saboteurs Association says:

how can an organisation, funded by taxpayers, continue to licence illegal hunts?

Whether the National Trust will actually enforce their trail hunting ban remains to be seen. After all, it has repeatedly ignored ample evidence that stags are hunted and murdered on its land. Public pressure, as well as active monitoring on the ground by hunt saboteurs, will be key in ensuring that the ban is upheld. And it is also up to all of us to ensure that big landowners like the MoD and Forestry England follow suit and ban trail hunting for good.