Will the Plaid Cymru/Labour deal be a reflection of ‘The Welsh Way’? - The Canary 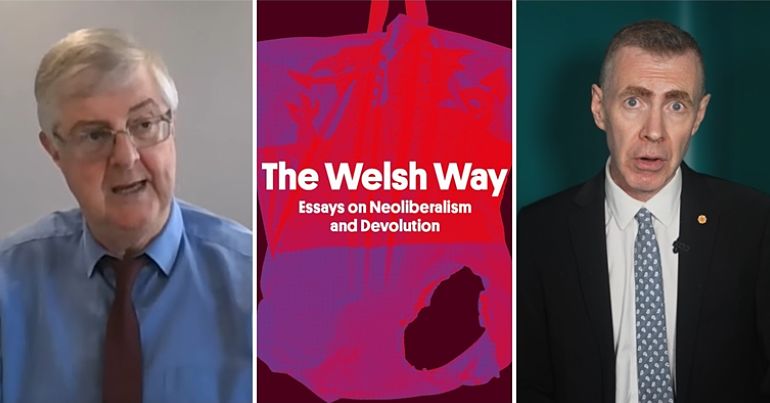 Plaid Cymru and Welsh Labour have made a three-year “cooperation agreement” to govern Wales. Having fallen just one seat short of an overall majority in May’s Senedd (Welsh parliament) elections, Labour needed support to stay in government.

So, on 22 November, Plaid Cymru and Labour announced an agreement that promises free school meals for primary schools, a strengthening of the Welsh language, to increase representatives in the Senedd, and to tackle the housing crisis. Ideas which are also discussed in a new book called The Welsh Way: Essays on Neoliberalism and Devolution

That deal was then approved by Plaid Cymru members at its virtual annual conference on 27 November. Leader of Plaid Cymru Adam Price said the agreement means a Senedd:

which is gender balanced in law, enshrining the right to equal representation for women for the first time ever

a radical agreement that represents the clearest and most decisive break with the proceeding 10 years of neoliberalism that followed the end of the One Wales coalition when Plaid Cymru last succeeded in shifting Labour in Wales to the left.

It’s a unique Welsh departure from the British constitution, a down-payment, if you like, on independence.

Different political and community groups across Wales welcomed the agreement. Acorn Cardiff said it was a victory for “ordinary people across Wales”. UNDOD welcomed it as a hopeful first step away from neoliberalism. And some in England also welcomed it:

A fantastic progressive programme from @MarkDrakeford The question is why can’t @UKLabour in England do the same? Maybe we should all move to Wales https://t.co/E1lA6KNRTo

Labour’s Mark Drakeford secures a radical programme for Wales that contains many of the policies set out in Labour’s 2019 election Manifesto, charting clear red water between Welsh Labour and the Tories. https://t.co/XjpWbbKveY

When the former Labour first minister of Wales Rhodri Morgan used the term “clear red water” in 2002, he meant putting a distance between Welsh Labour and Tony Blair’s Labour government.

in general what some of this reflects to us is that a lot of the London/English left are not really interested in the reality of politics in Wales but rather would prefer to depict us and Welsh Labour in a way that favours their narrative and reflects their own concerns – basically that a genuine leftist politics is possible in Britain under [Labour] because that’s what we see in Wales.

Whilst I think it’s fair to give some credit to Drakeford on this… it’s a very naive reading of Welsh Labour as a whole.

But while some framed it as a victory for Welsh Labour, the question is, if this was the case, why has it taken this long? Labour has been the dominant party in Wales since 1999. Mark Drakeford has been a front bench minister since 2013 and first minister since 2018. In all that time, there has only been one radical and progressive programme agreed before going into government – namely One Wales. It’s one from 2007 which also involved an agreement with Plaid Cymru.

And while the Well-being of Future Generations (Wales) Act 2015 (WFG Act) is progressive legislation, a political activist told The Canary, the government’s:

When speaking on BBC Radio Wales’s Sunday Supplement on 28 November, Price explained what he saw as the main problem in Wales:

What we’ve had… over the last ten years, and its set out in the book… ‘The Welsh Way’ which charts the last ten years – particularly under democratic devolution when we’ve had the language of progressive politics from a Labour led administration – but the reality has been tinkering at the edges…

The “book” Price mentions contains a collection of essays that could represent “a radical challenge to Welsh political thinking”. The book believes “politicians have failed to deliver on the devolution dividend”. And it:

includes an array of different themes, with discussion on underlying beliefs and structures, policy fields and issues, as well as accounts of life under the current devolution settlement. What ties them together is the negative impact of neoliberalism – the prevailing capitalist ideology with which Thatcher wrought destruction – and how consecutive Welsh governments have failed to protect Wales from its ongoing effects.

In its introduction, The Welsh Way critiques a speech Drakeford made at the Institute for Public Policy Research in July 2019. According to the book, Drakeford said:

it is socialism that teaches us to have optimism that the arc of history does in the end bend to justice, but the courage to know that it does not do so without a struggle, that nothing has ever been won for progressive causes or working people without the determination to take the action that wins those rewards … and that struggle, to return to the Future Generations Act, is not just a struggle simply for today but is a struggle to create the conditions that lead to better tomorrows.

But, according to the authors of this book:

none of this is, or indeed ever has been, remotely true. Despite Welsh Labour’s relentless self-mythologising over the past twenty years, Wales is, in practice, a deeply neoliberal country.

The book states that inequality has grown since devolution began, child poverty is the worst in the UK, homelessness and the prison population are at record highs, house prices are rising, and the private rented sector seems to mainly serve private landlords.

The book, therefore, claims to offer “a dose of the truth”, which it contrasts with the image of “Wales as a progressive, socialist country safely distanced from Tory policy by Welsh Labour’s ‘clear red water’”. It says:

the notion of ‘clear red water’… is nothing more than, a rhetorical device designed to obscure reality and secure the ascendancy of the Labour Party in Wales… the reality…was much closer to ‘murky brown water’.

In his chapter on neoliberal politics, Huw Williams says:

Neoliberalism… will never be reconciled with the type of far reaching policies that are required in order to tackle inequality and marginalisation in a meaningful way. This aversion to state interventionism is sometimes reflected in the manner in which the Welsh Government, when not simply funding the private sector directly, ‘outsources’ even some of its most mundane tasks in an attempt to cloak its own actions and influence.

Williams believes this allows politicians to deny any responsibility for a country’s problems while maintaining an appearance of concern for those problems.

One such problem is housing. In his virtual conference speech at the weekend, Price touched on some of the detail of the “cooperation agreement”. In doing so, he gave an overview of what it would mean for housing. He said the agreement means:

The creation of Unnos, a national construction company, to improve the supply of social housing.

This could mean a lot to the people of Wales. Campaigners have previously spoken to The Canary about how neoliberalism has contributed to its housing crisis; a crisis that means people can’t afford to buy in the communities they grew up in. Angharad Tomos highlights the problem of second home ownership. Tomos says this problem means young people have “no chance at all” to buy a house because “they are priced out of the market”. In 2020, in places such as Gwynedd, 38% of the houses sold “were sold as second homes”.

Steffan Evans also writes about the affordability of housing and the effects it has on homelessness. According to Evans:

The average rent on a two-bedroom property, both social and private rent, is unaffordable to the lowest quartile of earners in every local authority area in Wales. This pushes people into poverty, leading to households having to cut back on heating, food, and other essential items. At its extreme, this lack of affordable housing can push people into homelessness: 12,000 households were made homeless in Wales in 2018/19. Yet these problems are not new. The current crisis is a result of decades of policy failure, the lessons of which we are still too slow to learn.

He says in those last two decades the number of homes that are privately has rented doubled.  And at the same time, the percentage of owner-occupied homes and social homes have fallen. The implications of these changes, according to Evans, is that it puts “more families at risk of poverty”. And he says there has been little response from the Welsh government other than “professionalising” this sector.

He believes the Welsh government has contributed to the growth of the private rental sector by spending “vast amounts of money supporting tenancies”. And because of a shortage of social housing, tenants are forced to live in private sector housing. Many of these tenants struggle to afford these rents or they have needs that the sector can’t deal with.

While Evans understands a solution to this problem will take time, he believes we should start by moving away from subsidising rents to subsidising house building. He adds that the Welsh government should immediately move its investment to social housing. Additionally, the Welsh government should use its taxation powers to raise the necessary funds by raising taxes on second home owners and landlords and by ensuring homeowners pay their fair share.

As Plaid Cymru and Welsh Labour begin this programme together, they appear to have the support of quite a few groups in Wales and beyond. The challenge for both parties is to ensure it acts on that agreement to ensure Wales can properly tackle the damage done to it by decades of neoliberalism.

There’s been enough “tinkering at the edges”, and now, with so much support on the ground, it’s time for Welsh politicians to tackle inequality in a way that means something to its people.