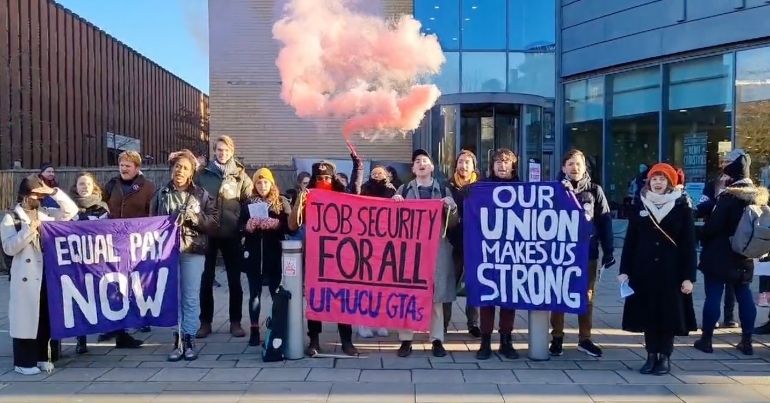 According to the union, “UCU members are taking action over falling pay, the gender and ethnic pay gap, precarious employment practices, and unsafe workloads”. Since 2009, university staff have seen real terms pay cuts of nearly 20%. And cuts proposed by Universities UK (UUK) will see the average pension drop by around 36% (despite claiming that the proposed cuts would lead to 10% to 18% drop).

The process of applying for the funding we are told we must secure in order not to lose our jobs is so long that I had to work part time in order to drag out my contract.

I'm [not] striking because this year Liverpool uni made me redundant straight out of maternity leave during a global pandemic then stood by & watched me with my baby as I cleared out my office in their new multi-million pound building.#whyimstriking #UCUstrike #LivUniStrike https://t.co/fGytiI6NxZ

Assuming that people in caring professions will just give, give, give because we care maintains and reinforces an unhealthy relationship to work–and to care itself.

Institutions expect–and delegate or outsource–care without providing ecosystems of support. The result is burnout.

University staff are also taking industrial action to challenge unjust pay gaps. As it stands, the pay gap between Black and white higher education staff is currently 17%. The average gender pay gap is 15.1%. And the disability pay gap is at 9%. A UCU survey found that marginalised university staff are disproportionately impacted by excessive workloads and insecure contracts.

Announcing the first day of industrial action, the UCU tweeted:

🚨UCU members at universities across the UK begin three days of strike action today in defence of pay and pensions and to fight against pay gaps and job insecurity.

Tweet your support and visit your nearest picket line if you can ✊#OneOfUsAllOfUshttps://t.co/tsN6OIgEwM

Striking staff are demanding the reversal of pension cuts, and a £2.5k rise in pay for all staff. They are also demanding “action to tackle unmanageable workloads, pay inequality and insecure contracts”.

If they continue to ignore the modest demands of staff then we will be forced to take further industrial action in the new year, which even more branches will join.

Striking staff took to social media to share pictures from picket lines up and down the country. The University of York’s UCU shared:

A brilliant first day on the pickets at York – onwards to victory. #OneOfUsAllOfUs @ucu pic.twitter.com/QmSBR4EZDF

Amazing turnout for the 1st day of UCU strike! Students out in big numbers to support our staff! #SupportUCU pic.twitter.com/vUZOgy6d4r

Highlighting that the marketisation of the UK’s higher education system impacts all workers in the sector, UCU posted:

And striking staff at universities including the London School of Economics (LSE) held teach-ins:

An overwhelming number of students have met the industrial action with outpourings of support and solidarity for striking university staff. Indeed, according to the National Union of Students (NUS), 73% of students support industrial action. On 1 December, students took to picket lines across the country to express solidarity with striking higher education workers. NUS president Larissa Kennedy tweeted:

the NUMBER OF STUDENTS out and pissed at uni management ??? yh the movement is doing bits

RSM is letting uni bosses know that we’re coming for them. We won’t wait around whilst they turn education into a profit making machine pic.twitter.com/47UpVpkOJI

Students occupied the University of Manchester’s business school to support the ongoing strike. One student posted:

And…. We're back. Occupying you again @OfficialUoM . Oh dear! We thought the Business school was fitting as you'd rather run like a business than pay your @UM_UCU staff fairly and equally! All solidarity with strikers, see you on the pickets tomorrow! pic.twitter.com/FoSgo5faA8

Despite attempts to divide us Birkbeck students stand in solidarity with striking workers.

Today we sent an open letter to the Vice-Chancellor saying NO to overwork, precarious contracts, pay gaps and pension cuts; 330 signed so far – add your name now!https://t.co/uc2djMmQ4d

Meanwhile, the University of Sussex Students’ Union has organised a march and rally in solidarity with local striking staff:

Meet other marchers at Falmer Picket Line (by the crossing) at 11am to head down to Brighton campus together on the bus before marching to The Level, Brighton.#ussu #sussexstudent pic.twitter.com/Mvv7skwhZW

The strike action is due to continue until Friday 3 December. In the meantime, UCU is urging supporters to join their local picket line to support striking higher education staff. The union has shared a list of all institutions taking part in the industrial action. UCU is leading a march and rally in London on 3 December. The union is encouraging anyone who can’t make it to the picket lines to express solidarity on social media, and to donate to UCU’s strike fund. It is vital that we – particularly those of us who are students – unite in solidarity with striking university staff and against the marketisation of higher education.