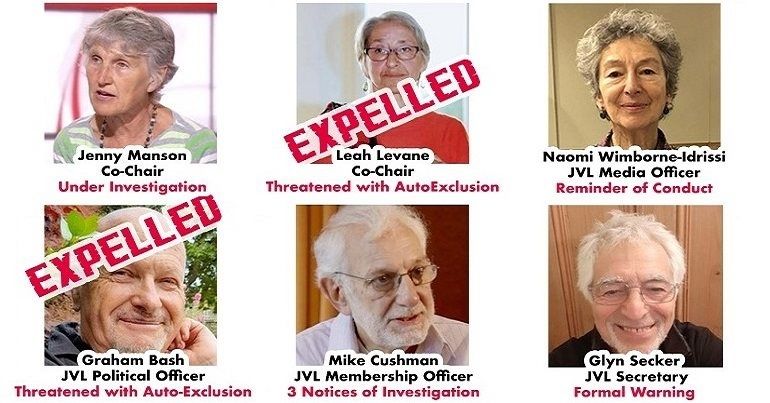 The Equality and Human Rights Commission (EHRC) has asked Jewsh Voice for Labour (JVL) to submit evidence of the Labour leadership’s antisemitic discrimination against leftwing Jews in the party. A number of JVL members have been suspended or expelled from Labour, including two who have since passed away. In many cases, they were singled out for comments on Israeli policy in occupied Palestine.

JVL has submitted twice to the EHRC before. But this is the first time it’s been asked to contribute. In the new submission, JVL aims to raise:

the continued unfair targeting of Jewish members of the Party and in particular Jewish members with particular beliefs set out in further detail below, which appears to be entirely contrary to the findings of the EHRC Report and the purpose of the Action Plan

the unfair procedures the Party is continuing to follow in respect of disciplinary proceedings
against individual members, in breach of principles of fairness, natural justice and
recommendations made by both the EHRC, and by Baroness Shami Chakrabarti in her report
published on 30 June 2016, following her inquiry into antisemitism in the Party (the
“Chakrabarti Report”). [Original emphasis]

The submission also highlights how two members of the organisation have died without being able to clear their names:

Two JVL members, Riva Joffe under investigation, Mike Howard having received a punitive suspension for antisemitism, have recently died, tragically with these offensive and unfounded charges against them unresolved. In the case of Mike Howard, his appeal against his suspension remains unresolved since 12 April 2021

JVL says the Labour Party has failed to even understand antisemitism, with devastating effects for some:

As a preliminary point, JVL considers that the failure of the Party to introduce a fair process to tackle antisemitism has resulted from its failure to properly understand antisemitism.

JVL’s submission sets out what it means by antisemitism according to the key definitions:

The understanding of antisemitism on which this analysis is based reaffirms the traditional meaning of the term. This is important in the light of attempts to extend its meaning to apply to criticisms often made of the state of Israel, or to non-violent campaigns such as BDS. A charge of antisemitism carries exceptional moral force because of the negative connotations rightly attaching to the term. It is illegitimate to make such claims to discredit or deter criticism, or to achieve sectional advantage. To do so is to devalue the term. To be clear: conduct is antisemitic only if it manifests ‘prejudice, hostility or hatred against Jews as Jews.

And JVL cites the Jerusalem Declaration on Antisemitism, arguing this is a far more precise definition than that used by the Labour Party.

JVL also charges the Labour Party with using a confused framework for accusations. This, they write, has hindered those accused from responding to allegations:

In the majority of investigations into alleged antisemitism, the Party asserts that the member is guilty of conduct that “undermines the Party’s ability to campaign against antisemitism”. This is a vague accusation that does not provide the member with sufficient information to understand, or defend themselves against, the charge. It also gives the Party an effective carte-blanche to investigate members in relation to complaints that have no basis and to stifle any questioning of the Party by its members. 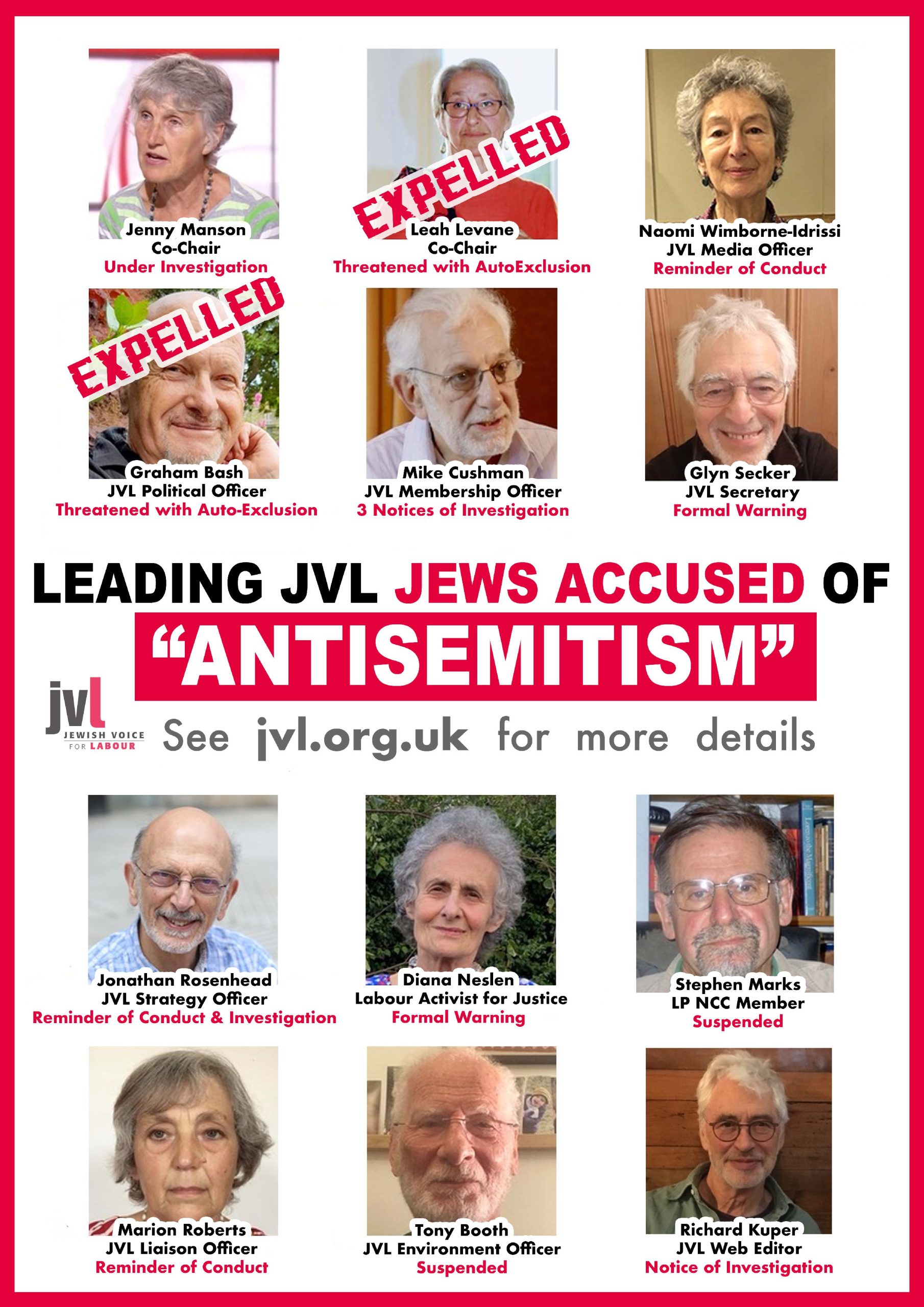 The submission also argues that Jewish Labour members have been accused of antisemitism at disproportionate rates. They point to Annex 11 of their submission:

which contains statistics on the number of investigations by the Party brought against Jewish members and in particular, anti-Zionist Jewish members. Annex 11 sets out that, as a population share, over five times more Jewish than non-Jewish Party members have been investigated in relation to allegations of antisemitism.

While Annex 17 looks at how the work of Jewish writers has been used as evidence of anti-Jewish racism without the author’s knowledge:

No attempt has been made by the Party to discuss the work with the respective authors; instead the Party proceeds on a misrepresentation that its interpretation is based on firm, legal evidence

The submission refers to Mike Howard, an accused JVL member. He passed away in 2021 having never had the chance to clear his name. The submission document tells part of his story:

JVL draws attention in particular to the case of the late Mike Howard, whose appeal against his unjust punitive suspension is set out in Annex 15. Prior to investigation, Mr Howard had an unblemished record as a Jewish Labour, trade union and anti-racist activist. He was therefore incredibly angered and distressed to find himself subject to investigation.

His appeal was filed in March 2021, with further submissions made on 13 April 2021. Following that date, Mr Howard received neither any update on progress nor any substantive response from the Party. Tragically, Mr Howard died in November 2021, without even an acknowledgement of his appeal by the Party.

A video of Mike Howard’s full story is available on YouTube:

JVL’s Jenny Manson and Richard Kuper spoke to The Canary. Manson said said she was disappointed with the EHRC:

It’s disappointing that the EHRC have not agreed to open an investigation into the targeting of so many Jews by the Labour Party. They seem to consider that their Report in January 2021 had dealt with issues relating to antisemitism in the Party.  We by contrast considered they got off on the wrong premises, made questionable findings and failed to expose both the politicisation of the Party’s procedures and the Party’ misinterpretation of antisemitism.

She said the EHRC had originally referred them to Labour’s antisemitism Action Plan. But reminded them that JVL’s nominees had originally been excluded from involvement:

So, after the EHRC referred us to the Action Plan we wrote back again and reminded them that JVL nominees and eg  those put forward by John McDonnell including a Rabbi and two Jewish experts on the interpretation of antisemitism, were excluded from consultation or any involvement in the new Plans.

JVL felt that the evidence of harsh treatment of Jewish members was finally being considered by the EHRC:

It now appears that evidence we have been providing of the increasing harsh treatment and targeting of our Jewish members has been of concern to the EHRC.  It’s hard to believe it wouldn’t be.  Looking at Annex 11, you will see that 41 Jewish individuals have faced investigations for antisemitism.  Of the current eleven JVL exec committee, ten have been or are presently facing disciplinary action or investigations related to allegations of antisemitism.

They added that the group was pleased their concerns were finally being noted:

We are very pleased that the EHRC have now taken account of our specific concerns about this Plan by asking for us to make further submissions to assist the EHRC’s monitoring exercise.

Manson said that the whole process had been “unjust” to members:

Incidentally, the EHRC did not endorse the IHRA definition of antisemitism and noticed as we did the Party’s use without publication till this year of the ‘NEC Code of Conduct; Antisemitism’ to try to explain the IHRA.  This was unjust to members and hugely ironic given this NEC plan in 2018 was considered yet another sign of the scandalous. antisemitism of the Party’s leadership.

Asked what they hoped would be achieved from the submission, JVL’s Richard Kuper told The Canary:

We  believe  that  the evidence we have supplied and the arguments we have made will reinforce realisation the EHRC that these issues need to be taken into account in their monitoring of Labour’s actions. Doing so would be an important step in breaking the mainstream media’s radio silence on the harassment of Jews in the Party which is taking place under the aegis of the current leadership..

It can only be hoped that JVL members finally get a chance to be heard. And that the names of those who have passed away will now be cleared.