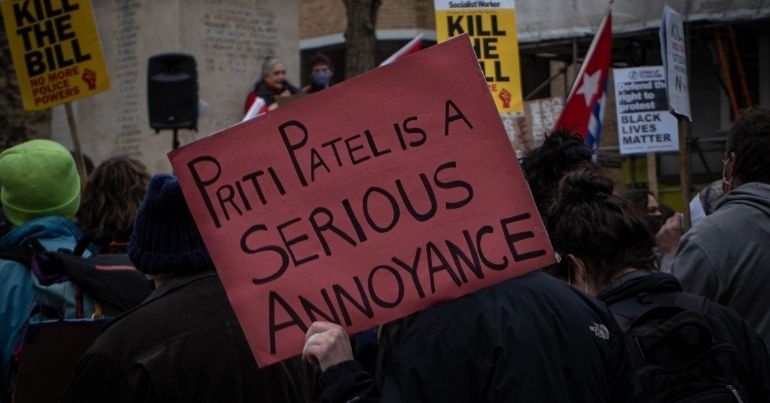 The government’s draconian Police, Crime, Sentencing and Courts (PCSC) Bill will enter the report stage in the House of Lords on Wednesday 8 December. On 2 December, the Home Office formally announced further amendments to its authoritarian bill. On 18 November, The Canary‘s Emily Apple explained that, if implemented, amendments before the House of Lords would clamp down even harder on our right to disruptive protest – the backbone of a democratic society.

The Kill the Bill coalition will be holding a celebration of our right to protest outside the Lords on 8 December.

From its inception, the draconian PCSC bill has threatened to crack down on our fundamental right to protest, and target marginalised and over-policed communities. Owing to its repressive nature, the bill sparked large-scale protests nationwide.

The bill sets out a series of new offences, sentences, and draconian anti-protest measures, such as penalties of up to 10 years for damaging a statue. The case of the ‘Colston four‘ – who stand accused of toppling the statue of Edward Colston – offers a vignette into our future under the PCSC bill.

As reported by The Canary, proposed amendments include the introduction of a new offence called “locking on” – i.e. protesters attaching themselves to another person or object, or carrying ‘equipment’ to do so. According to the Home Office, offensive equipment could include glue. Protesters found to be “locking on” could face up to 51 weeks in prison.

This amendment specifically targets groups such as Insulate Britain which recently staged a number of roadblocks to raise public concern about the existential threat of the climate crisis. Due to their attempts to sound the alarm on environmental devastation, some of these activists are facing criminal proceedings.

On 9 November, we saw ‘Stop the Plane’ activists held in overnight custody having blocked authorities from transporting detainees to a deportation flight by locking on. While activists stalled proceedings, it became clear that a number of detainees bound for deportation had the right to remain in the UK, with another deemed unfit to fly. Moments such as this demonstrate just how essential disruptive protest is to the pursuit of justice and freedom.

Hacking away at our fundamental rights

One proposed amendment would empower police to stop and search anyone if they believe a protest may be taking place in the area. Police wouldn’t need a reasonable suspicion. According to human rights charity Liberty, offensive materials could include placards, flyers, or banners. Anyone who refuses to cooperate with officers could face up to 51 weeks imprisonment.

This amendment would further marginalise Black protesters, who already experience excessive and disproportionate stops and searches. In the meantime, the UK government can continue to unabashedly breach its human rights obligations to take action against race disparities.

Perhaps most concerning of all is that the Home Office now seeks to introduce serious disruption prevention orders. This civil order would empower police to impose restrictions on anyone who has been convicted of two or more protest-related offences. Under such orders, police could ban them from certain places, seeing certain people, or even encouraging protest online. This would effectively remove their rights to freedom of speech and assembly.

On 2 December, the Home Office announced some of these amendments which seek to ‘crack down on highly disruptive protest tactics’. As Liberty’s Jun Pang highlights, the home secretary leaves the meaning of “serious disruption” unclear and open to interpretation. This will only play into the oppressive state’s hands.

The government’s attempt to push through the PCSC bill is nothing short of authoritarian. Due to the government’s sustained attempts to curtail our civil liberties, civic freedom monitoring organisation CIVICUS has added the UK to its watchlist. Additionally, the proposed Nationality and Borders bill, the Health and Care bill, updates to the Official Secrets Act, plans to introduce voter ID, and threats to overhaul the Human Rights Act are all tell-tale signs that the UK is an increasingly fascist state. We must fight in any way we can to stop the government’s tyrannical agenda.

Human rights charity Liberty is calling on anyone seeking to challenge the proposed PCSC bill to sign its petition. The petition urges home secretary Priti Patel and secretary of state for justice Dominic Raab to scrap the bill. It has 66,937 signatures at the time of writing. The next milestone the organisation is aiming to reach is 75,000 signatures.

The bill will enter the report stage in the House of Lords on Wednesday 8 December. The Kill the Bill coalition will be holding a noisy demonstration in Westminster to coincide with this:

#Killthebill at the House of Lords Wed 8th December 2021, 5-7pm to add pressure to the Lords 3rd reading and vote on the #PCSCBill. Bring candles, lights and torches for this celebration of everything protest and freedom have given us. Expect music, singing, poetry and speakers. pic.twitter.com/goPvzSHppN

The government is trying to stifle our right to challenge the advancing fascist state. If passed, the PSC bill would criminalise anyone seeking to disrupt and dismantle the increasingly unjust and unequal status quo. We must fight tooth and nail to defend our right to protest and hold this authoritarian government to account. If we let the Tories take away our fundamental rights, they could be lost forever.