50 years on from Bloody Sunday, campaigners continue to demand justice for the ‘butcher’s dozen’ - Canary 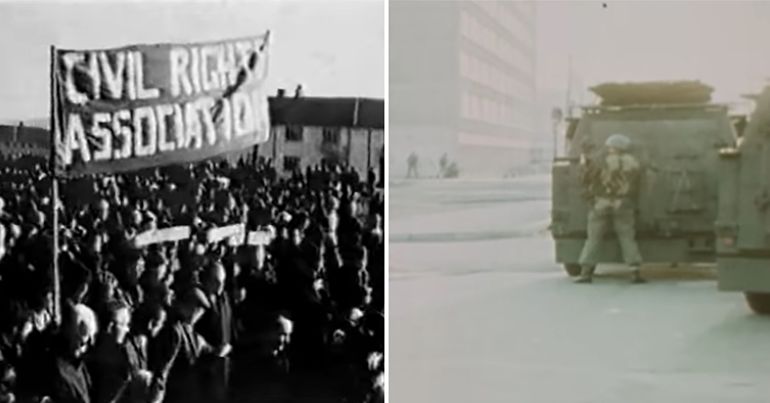 50 years ago on 30 January, in the Bogside of Derry city, civil rights protesters marched against the British government’s policy of internment without trial. Started in August 1971, this policy resulted in the arrest and imprisonment of almost 2,000 Irish republicans, Catholics, and nationalists over a four-year period. The peaceful protest began at 3pm, and about one hour later 13 people were dead. A 14th man later died from his wounds. The British parachute regiment murdered them all.

Despite the 2010 Bloody Sunday Saville inquiry exonerating those 14 people from any wrong-doing – which their families already knew – not one British soldier went on trial. In fact, in July 2021, the Public Prosecution Service (PPS) announced that soldier F – the one soldier from that day who was supposed to stand trial – would no longer do so. The PPS said there wasn’t a reasonable chance of getting a conviction. Then in December 2021, in political magazine Village, author David Burke reported something even more sinister about the day of the massacre:

The behaviour of Support Company of 1 Para, also known as ‘Kitson’s Private Army’, [general Frank Kitson] on Bloody Sunday, indicates that a secret mission was assigned to them, or some designated number of them.

The day after the massacre, British prime minister Ted Heath announced that lord Widgery would chair a judicial inquiry. But the Widgery inquiry was a total cover up. It ignored key witnesses and evidence and attempted to blame the march organisers for the 14 deaths. Additionally, it threatened the media with contempt of court should it report on the inquiry’s anticipated findings.

As the British government announced Widgery’s inquiry, the British Information Service told lies about those its soldiers had murdered. It claimed four of the dead were on their wanted list, and another victim had nail bombs in his pocket. All completely false.

While the much lauded 2010 Saville report exonerated the victims, it didn’t fully call out Widgery’s outright lies. It simply told families what they had already known – their loved ones had done nothing wrong. No prosecutions followed. So in effect, it was another whitewash.

Burke claims four of the soldiers in Support Company, including soldier F who he names, may have been acting on:

This would have given Support Company the “excuse it needed to invade ‘Free Derry’” so it could engage in “a street battle with the IRA”. At that time, Free Derry was a no-go area for British police and the army. But the IRA wasn’t active in the area that day.

According to Burke, the parachute regiment wasn’t necessarily interested in whether the IRA was active or not. He claims British military intelligence and MI5 had a “deceitful” spy working in Free Derry. This spy then lied about the presence of 40 IRA gunmen that day. This, according to Burke, would have been “like a red rag to a bull” for Kitson and Wilford. But Burke also believes that the parachute regiment’s plan of attack would have gone ahead without the peddled lies.

So it would appear as if Soldier F, as well as others in Support Company, were acting on orders and a clear plan for that day. The rest is now tragic history.

Fighting back against the Tory amnesty and “collusive behaviours”

The Tories appear set on proceeding with an amnesty that would protect people like soldier F, and his commanders, from prosecution. Before that amnesty even becomes law, the PPS has decided, for now at least, that soldier F won’t stand trial. Families of soldier F’s victims haven’t given up, though. Instead, they’re seeking a judicial review of that decision.

In what appeared to be an act of solidarity with soldier F’s victims, Colum Eastwood, leader of the Irish nationalist party SDLP, named this soldier under parliamentary privilege. Eastwood did this just days after the PPS announced the decision not to prosecute. He said:

The people of Derry know his name. There is no reason for him to be granted anonymity. No other perpetrator involved would be given anonymity, for some reason Soldier F is a protected species.

In the lead up to Bloody Sunday commemorations, the Northern Ireland police ombudsman released its findings from an investigation into alleged collusion between police and loyalist terror gangs. On 14 January, the ombudsman’s report said there had been “collusive behaviours” between the Ulster Defence Association (UDA), Ulster Freedom Fighters (UFF), and British police.

This report looked at the years 1989 to 1993. These “collusive behaviours” involved the murders of 19 people and the attempted murder of two others. But the ombudsman:

found no evidence that the RUC [previous name for the PSNI – Police Service of Northern Ireland] had any prior knowledge of the attacks.

The announcement came as little surprise to victims’ families. And, along with Bloody Sunday, it marks yet another dark chapter of Britain’s role in Ireland.

It’s been 50 years without any real justice. But Kate Nash, one of the founding members of the Bloody Sunday March for Justice, told The Canary that the absence of justice “doesn’t take its toll” on the justice campaign team at all. In fact, they’ll continue to “put pressure of the British government” she says. Nash is part of a cross-community campaign for the British government to drop their plans for an amnesty.

Bloody Sunday March for Justice has a full programme of events from 24 to 30 January. This includes a conversation on 28 January between Jeremy Corbyn and Bloody Sunday justice campaigner and journalist Eamonn McCann.

Given it’s the 50th anniversary and that poet Thomas Kinsella died a few weeks ago, it seems fitting to end with an extract from his poem Butcher’s Dozen. He wrote this in the aftermath of the massacre:

“Careful bullets in the back

And so three dangerous lives are done

– Judged, condemned and shamed in one.”

That spectre faded in his turn.

A harsher stirred, and spoke in scorn:

“The shame is theirs, in word and deed,

Who prate of justice, practise greed,

And act in ignorant fury – then,

Send to their Courts for the Most High

To tell us did we really die!

Does it need recourse to law

To tell ten thousand what they saw?

Law that lets them, caught red-handed,

Halt the game and leave it stranded,

Summon up a sworn inquiry

And dump their conscience in the diary.

During which hiatus, should

The thing is rapidly arranged:

Where’s the law that can’t be changed?

The news is out. The troops were kind.

Impartial justice has to find

We’d be alive and well today

If we had let them have their way.

Yet England, even as you lie,

You give the facts that you deny.

Spread the lie with all your power

Friend and stranger, bride and brother,