After 47 years just one soldier is to face prosecution for Bloody Sunday. The British establishment haven’t changed a bit. - The Canary 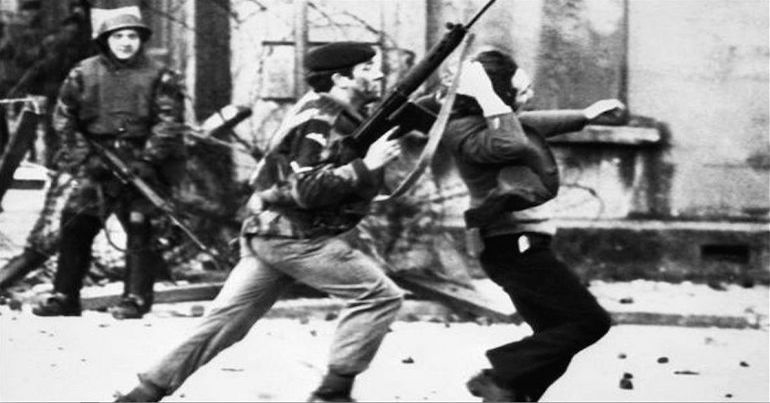 The people of Derry and Ireland had waited 47 years for this announcement. Then on 14 March, it came. The director of public prosecutions (DPP) Stephen Herron announced just one of the surviving 17 paratroopers will face prosecution for his part in the Bloody Sunday massacre on 30 January 1972.

On that day, British paratroopers entered the Bogside in Derry and shot and killed 14 civil rights protesters. They injured another 14.

The family response to the announcement was dignified. And while many were “disappointed” they might not have been surprised. Because this announcement wasn’t as much a “slap in the face”, as it was in keeping with the British establishment’s record in Ireland.

Leading up to the DPP’s announcement, Derry journalist Eamonn McCann felt confident there’d be more than one prosecution. McCann even made predictions of “seething anger” should soldiers not be prosecuted. Previously The Canary reported at least four soldiers could face prosecution.

Additionally, solicitors representing some of the victims’ families submitted that Corporal P and Lance Corporal J face prosecution. This was for the murder of John Young and Michael McDaid. None of this happened.

It’s now almost nine years since the Saville inquiry into Bloody Sunday exonerated the 14 dead from wrongdoing. And even if Saville took 12 years to reach its conclusion, it didn’t tell the families anything new. The families already knew their loved ones were innocent. But neither soldier nor commander faced prosecution directly after Saville.

47 years on, the British establishment finally announced just one soldier will face prosecution. Just one. And to add insult to injury, the Ministry of Defence said it’ll pay all of this soldier’s legal costs.

The announcement made by the DPP isn’t out of the blue. In fact, it’s very much in keeping with the British establishment’s shameful history in Ireland. A recorded telephone conversation between two British army officers on Bloody Sunday, where they make light of the numbers killed, gives an insight into their thinking.

As reported by The Canary, collusion between British security forces and loyalist terrorists in the killing of Irish civilians still needs to be fully investigated. But campaigns for full investigations have a way to go.

The Black and Tans were the paratroopers’ predecessor. They were responsible for part of the previous Bloody Sunday in Dublin in 1920. That day they murdered 13 Irish civilians watching a football match. After the Irish rebels defeated them, some of the Black and Tans served in the British Palestine Gendarmerie.

And as The Canary also reported, the attitude by the British establishment towards Irish suffering during the famine in the 1840s has changed little.

So defence secretary Gavin Williamson’s response to the announcement should also come as no surprise. Williamson vowed to fund the soldiers’ legal expenses. He also praised the efforts of British soldiers in Ireland saying:

We are indebted to those soldiers who served with courage and distinction to bring peace to Northern Ireland.

Some family members have vowed to continue their fight for justice. And as Brexit and a possible hard border approaches, this leaves the families isolated in the north of Ireland.

But just as we need not be surprised at the British establishment’s response, it need not have done this either. It could have simply prosecuted the soldiers for their crimes. Sadly and predictably, it opted for the road most travelled.