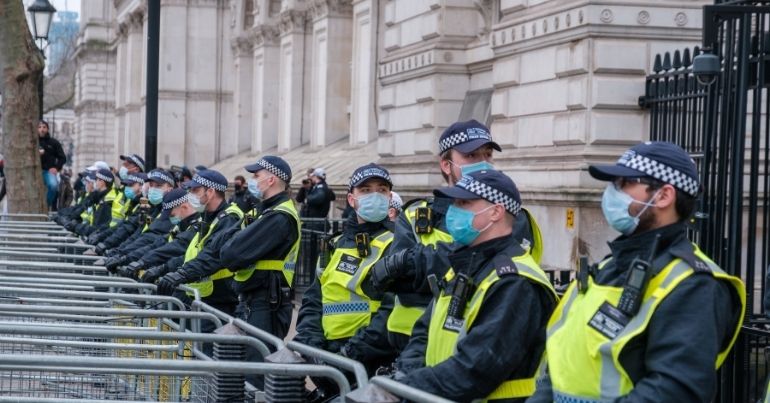 And despite calls to reduce the number of strip-searches conducted by the Met, Nottingham criminology researcher Dr Tom Kemp found an increasing trend of the force’s use of the draconian measure.

Disproportionate use of strip-searches

An FoI request by Kemp found that Met police carried out a staggering 172,093 strip searches in the past 5 years.

In spite of calls to reduce the force’s use of the humiliating and traumatic practice, Kemp noted a peak of around 34,000 strip-searches in 2020 which “continued a trend in increasing use of strip searches from before the pandemic”.

Kemp’s analysis of the data revealed that 33.5% of strip-searches carried out by the Met police in the last five years were on Black people. This amounts to 57,733 strip-searches. However, Black people only make up around 11% of London’s population.

Conversely, white British people – who make up nearly 45% of London’s population –  accounted for 27% of strip-search victims.

A concerning number of children were reflected in the number of strip-searches the Met has enacted. Indeed, the force carried out over 9,000 strip-searches on children in the last five years, including more than 2,000 under-16s.

In an open letter published in the Guardian in 2015, a group of children’s rights organisation leaders raised concerns abut safeguarding and child protection when it comes to strip-searches. The letter read:

Strip-searching is a humiliating, degrading and frightening experience for anyone, but especially for children who come into contact with the police, a high proportion of whom may have experienced abuse and/or mental health difficulties.

In 2019, the HM Inspectorate of Constabulary, Fire and Rescue Services (HMICFRS) drew critical attention to the Met’s excessive number of “unwarranted” strip-searches. The inspectorate raised concerns about the disproportionate number of strip-searches carried out on people from racialised Black and ethnic minority backgrounds. It also noted the high number of children represented in the Met’s strip-search figures, highlighting that some cases were not “properly justified”.

The data gleaned from Kemp’s FoI request comes just weeks after the Met was forced to apologise to Koshka Duff after carrying out a degrading and misogynistic strip-search in 2013 which left her with PTSD.

Recounting her personal experience of strip-searches and reflecting on the mental and physical harm caused by the police’s draconian practice, The Canary‘s Emily Apple said:

As was the case for Apple, the victims of traumatic, unjustified strip-searches are routinely denied access to justice or recourse.

The Met police’s increasing and disproportionate use of strip-searches is incredibly disturbing. Officers can’t be trusted to respect people’s rights as things stand. We can only speculate as to what the future holds if they have even more powers and less accountability.