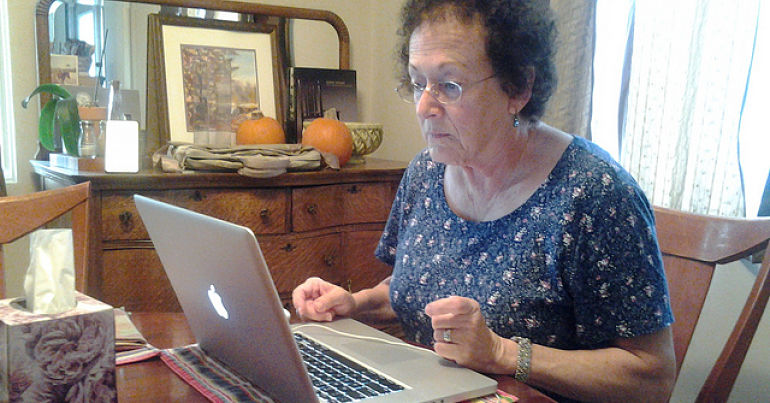 On 23 May, charity Age UK published a report entitled Everything is online nowadays. It warns that elderly people who struggle to use the internet are finding it increasingly difficult to claim housing benefit and council tax support.

It is totally unacceptable that millions of older people who are not online are effectively being screened out of accessing benefits to which they are legally entitled, and often badly need, because they cannot use the online application methods that are increasingly the default.

Surveys by the Office for National Statistics have found [pdf, p5] that over half of people aged 75+ have never used the internet. Additionally, the report states [pdf, p5] that:

Lower levels of internet use are also linked to financial disadvantage and disability (at all ages) and the proportion of older people who do not use the internet is likely to be even higher among those entitled to benefits.

However, Age UK’s research found that four out of ten councils are telling elderly claimants to apply for key benefits online. It says this is a major contributor [pdf, p4] to the fact that 19% of pensioners entitled to housing benefit are not receiving it.

In response to repeated complaints from older people, Age UK conducted a mystery shopper exercise. The charity contacted [pdf, p2] 100 randomly selected local councils in England, asking what options there were for people who wanted to claim benefits but can’t use the internet.

The key findings of the exercise were:

However, the long-term ramifications of elderly people not being able to claim key benefits could heap more pressure on councils. The report states [pdf, p15]:

if older people are not receiving the means-tested benefits that they are entitled to then they may face difficulties meeting rent and council tax or have to cut back on other essential bills such as heating and food. So short-term savings on benefits administration could, over time, lead to higher demands on social care or other services.

The National Audit Office estimates that, between 2010 and 2016, the number of people aged 65 and over in need of care increased by 14.3%. But a 2017 survey of councils in England and Wales found that 71% anticipated making further cuts to social care.

Age UK is fully aware of the intense financial pressures on councils, but this can be no excuse for working in ways that risk depriving older people of their due.

She goes on to advise that the findings are “just the tip of a much bigger iceberg”, with one in three older people at “huge risk of exclusion” due to a lack of digital skills.

Parish and town councils are increasingly helping financially challenged principal councils by providing services for older people, including help getting online to access the growing number of digital only services. Examples include internet cafes, computer clubs and free basic IT training. We therefore welcome Age UK’s call for more government funding to councils, which should extend to parish and town councils.

Age UK’s research demonstrates that, without the required support to navigate the digital age, more elderly people are suffering from exclusion and deprivation.