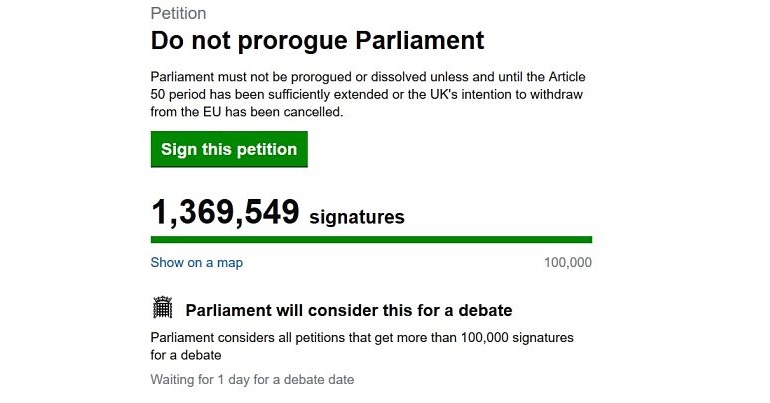 An online petition calling for the government not to suspend parliament has gathered well over one million signatures.

The e-petition on Parliament’s website gained 100,000 signatures in just a few hours, the threshold it needed for it to be debated by MPs.

Signatures on the petition continue to climb, despite the Queen approving an order on Wednesday afternoon to prorogue Parliament no earlier than September 9 and no later than September 12, until October 14.

Thousands of people protested against the plans to suspend Parliament, with rallies in London, Edinburgh and other cities within hours of Prime Minister Boris Johnson announcing the decision.

Critics, including Commons Speaker John Bercow, called the move a “constitutional outrage”, designed to stop MPs from intervening as the UK heads towards a no-deal Brexit on October 31.

But the protests were dismissed as “phoney” by Commons Leader Jacob Rees-Mogg.

He said the move was not intended to limit the time available for MPs to debate Brexit, but will allow the Government to tackle other issues.

He added: “Parliament wasn’t going to be sitting for most of this time anyway. This is completely constitutional and proper.”

With more than one million signatures, the e-petition is now one of Parliament’s top five most-signed proposals.

In March, a petition entitled “Revoke Article 50 and remain in the EU” gathered more than six million signatures, becoming the best-supported proposal in the history of the House of Commons and Government’s e-petitions website.

The now-closed petition was rejected by the Government, in a response explaining that revoking Article 50 would “undermine” democracy.