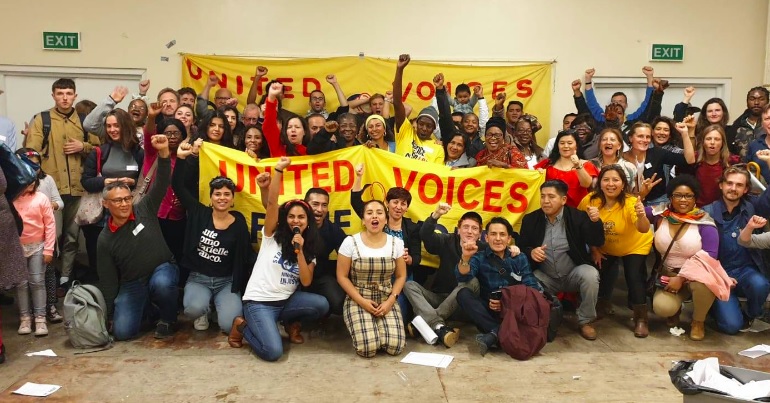 A number of London-based employers are currently facing strike action.

In most cases, outsourced staff are demanding the same pay and conditions as employed staff. And the United Voices of the World (UVW) trade union is organising strikes to support them.

The UVW is “a members-led, campaigning trade union which supports and empowers the most vulnerable groups of precarious, low-paid and predominantly migrant workers in the UK”. It started up in 2014 and gained attention with victories at Harrods, Sotheby’s, and the London School of Economics. It now has around 3,000 members.

Some of the strikes will take place at the University of London (UoL) universities of Greenwich, East London (UEL), and St George’s in October and November. These institutions are facing demands from “outsourced security guards and café workers” for equal pay.

At the same time, the UVW is also organising “strikes of entirely migrant workers at the Ministry of Justice, St. Mary’s hospital, the Royal Parks and ITV offices”.

One chef at the University of Greenwich said:

I usually work non-stop, I don’t take breaks as otherwise I cannot keep up with the work. Last week I worked so hard without a proper break that I collapsed on the bus home and had to be hospitalised. I don’t get sick pay, so I cannot afford to be sick. Think about it — I am a chef who deals with food, but cannot afford to be sick. This puts not only mine, but everyone’s health at risk.

It is demoralising. We feel like second-class workers while we do the crucial job of keeping all the staff and students safe.

And a striking cleaner at St. Mary’s revealed that:

I work 55 hours a week just to cover my rent. St. Mary’s is my home, I spend more time here than in my house. Yet I am treated like a dog and made to feel like dirt.

UVW has called the series of strikes an “Autumn of Discontent”. It explains that:

these workers are almost entirely migrant workers, predominantly women from Europe, Africa, Asia and Latin America working as outsourced cleaners, security guards, porters and caterers. They will be striking for the first time in their lives.

And it insists that the strikes are “against some of the most miserly and unscrupulous contractors around”.