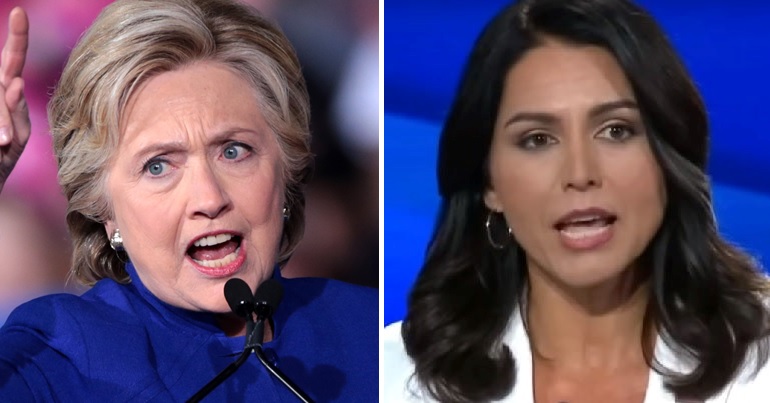 US Army veteran Tulsi Gabbard hopes to become the Democratic Party’s presidential candidate in 2020. But because she firmly opposes devastating US regime-change wars abroad and tells the truth about US links to terrorism, she has faced the wrath of the rich and powerful.

Speaking in a podcast, Clinton suggested that Gabbard is a “Russian asset”. This is not a new smear tactic from Gabbard’s opponents. In fact, one CNN contributor recently said the same thing, arguing without evidence that Gabbard is a “puppet for the Russian government”. But responding to Clinton’s words, CNN commentator Van Jones called them a “very dangerous game”. He then said:

she just came out against a sitting US congresswoman, a decorated war veteran, and somebody who’s running for the nomination of our party with just a complete smear and no facts.

Let’s not forget: Tulsi Gabbard was picked out by the Democratic Party establishment and put at the top of the DNC [Democratic National Committee]. They thought she was gonna be their golden girl. And she got in that position in the DNC, and she looked around; she saw Debbie Wasserman Schultz and other people – Clinton allies – doing stuff they shouldn’t have been doing in the primary. And Tulsi publicly quit and then endorsed Bernie Sanders. And it’s been payback hell ever since.

Democratic Party elites like Clinton have long pushed ‘Russiagate‘ conspiracies in an attempt to explain away Donald Trump’s 2016 election win and end his presidency. But while critics claim this actually strengthened Trump, establishment fearmongering about Russia is clearly far from over.

The “queen of warmongers”

Gabbard has long faced smears for opposing regime-change wars, especially from mainstream media outlets which tend to support such wars. And these smears continue today. But she wasn’t about to let such a high-profile member of her own party smear her as a “Russian asset”. So she hit back at Clinton, saying:

Great! Thank you @HillaryClinton. You, the queen of warmongers, embodiment of corruption, and personification of the rot that has sickened the Democratic Party for so long, have finally come out from behind the curtain. From the day I announced my candidacy, there has been a …

Hillary & her gang of rich, powerful elite are going after me to send a msg to YOU: “Shut up, toe the line, or be destroyed.” But we, the people, will NOT be silenced. Join me in taking our Democratic Party back & leading a govt of, by & for the people! https://t.co/TOcAOPrxye pic.twitter.com/TahfE2XOek

United by love for our country and each other, we will usher in a 21st century government of the people, by the people, and for the people. I will bring to the presidency the soldier's values of putting service before self — always putting our country's interest first. #TULSI2020 pic.twitter.com/nUIKM4GBuk

And as Gabbard stressed in one interview:

The reason why she’s doing this is because she [Clinton] knows that she can’t control me.

She also suggested the allegations amounted to a “new McCarthyism” – referencing the ‘red-baiting’ in US politics during the Cold War.

Gabbard has previously criticised Russia, but her campaign says opponents are resorting to “Russia-baiting propaganda” attacks against anyone “who speaks out against regime change war or the new Cold War”.

Stand up for peace

Progressives could genuinely question some of Gabbard’s positions, as we could with most US politicians. But it’s her strong criticism of disastrous regime-change wars and US links to terrorism that has sparked the anger of establishment politicians like Clinton. And fortunately, progressive politicians have spoken out in her defence:

Tulsi Gabbard has put her life on the line to defend this country. People can disagree on issues, but it is outrageous for anyone to suggest that Tulsi is a foreign asset.

Tulsi Gabbard deserves much more respect and thanks than this. She literally just got back from serving our country abroad.

Senator Mike Gravel: "Tulsi Gabbard has more credibility in talking about peace and proper use of the military than any other candidate literally in American history." (from interview with @PrimoNutmeg) pic.twitter.com/nsUH7sUcXT

Opposing war doesn’t make anyone a traitor or a foreign puppet. It makes them a sensible human being – no matter how much warmongering elitists try to tell us otherwise.