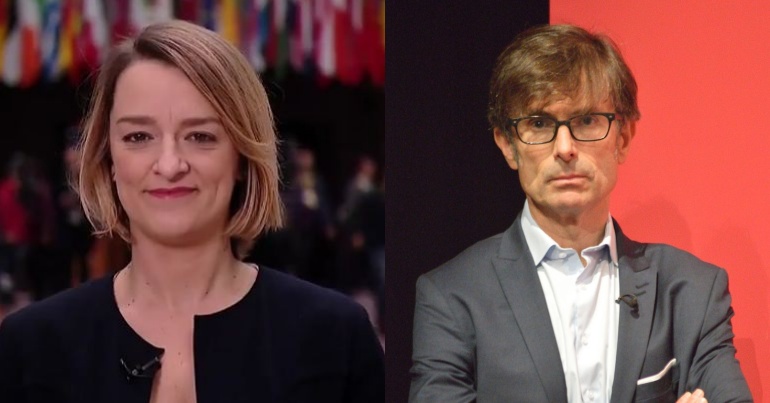 As Boris Johnson’s government plunges the UK further into political chaos, a ‘No 10 source’ has been very busy. Some of the UK’s most influential political journalists seem to be repeating whatever this unnamed and unverified source says. But this isn’t journalism, it’s propaganda. And both the BBC and ITV‘s political editors have turned up the megaphone as full-on government mouthpieces.

“Everything else is propaganda”

It’s chilling. From the Mail, The Times to the BBC and ITN, everyone is peddling Downing Street’s lies and smears. They’re turning their readers into dupes.

Dodgy stories and commentary linked to Downing Street or government sources started to appear in the press and media after Johnson installed his own media team, which was largely drawn from the Vote Leave campaign

And now nameless government ‘sources’, helped by political editors, are spreading “lies, misrepresentations, smears and falsehoods” across the establishment media.

The BBC‘s Laura Kuenssberg is one of the key players in this game. ‘No 10’ confirms and says a lot to her these days. But as Carole Cadwalladr noted, if government sources won’t go on the record, it’s just propaganda:

No offence to Laura, but we’ve learned the hard way. This literally means fuck all. It’s not even fake news, it’s non news. Non-verifiable, non-accountable, non-sense. Quote on the record or ignore. Everything else is propaganda https://t.co/mRZGYSWzS5

And ITV‘s Robert Peston is just as bad:

This evening @Peston feigning responsibility as a mouthpiece for disinformation from an unnamed source in No. 10 – is lamentable. He knows his job is to hold the government to account. He's made a choice not to. #DemocracyFail

And what’s equally dangerous is that countless other media outlets pick up these carefully fed snippets and run with them, and that sets the news agenda. Oborne pointed out that Kuenssberg’s tweets:

meant there were two government positions. One for the courts: that the government would obey the law. One passed on uncritically by the BBC political editor: that it would find a way to get round it. Kuenssberg’s tweets carried with them the implication that Johnson was deliberately deceiving a British court.

And Peston’s done similar things too.

The UN’s Mark Seddon suggests that pushing whatever these sources say out to audiences without research or analysis “isn’t journalism, it is stenography”:

'Sources close to', isn't journalism, it is stenography. If the BBC and ITN can't get senior correspondents such as Laura Kuenssberg & Robert Peston to appreciate this, they will forgive us if we switch off. https://t.co/ogEvutGzak

What’s also important, is that while TV news audiences are falling, more people are turning to social media as a news source. Kuenssberg has 1.11 million Twitter followers, Peston 1.03 million. They share their No 10 sources on social media, and it doesn’t take long for this to infiltrate the news cycle.

Oborne noted that Dominic Cummings, Johnson’s senior adviser, is thought to be behind this. In March, Cummings refused to appear before the digital, culture, media and sport (DCMS) committee. It was investigating fake news stories during the Brexit campaign. He was found in contempt of parliament.

On 22 October, the Spectator reported that Dominic Slack-Oxley is “the biggest source of fake news in Britain”. Backed by Cummings, he’s thought to be the ‘No 10 source’. According to Nick Cohen, Slack-Oxley also has two other ‘identities’. He’s part Robert Oxley, “Johnson’s press secretary, and a former spin-doctor for Vote Leave”. He’s also James Slack, who branded judges “Enemies of the People” in the Mail. in 2016. Cohen also explained:

The trouble with the Johnson administration is that it has taken existing conventions and pushed them to the point where political correspondents are complicit in disinformation campaigns.

As tonight Westminster correspondents have – yet again – been conned by Johnson's spin machine, I'm reposting my piece from earlier today on how they have become the Tories' useful idiots and how they can break freehttps://t.co/rkQ8MDwqwV

What’s it like to be publicly humiliated ⁦@Peston⁩ ⁦@bbclaurak⁩ ? You both have been by Johnson’s media manipulator – ‘Meet Dominic Slack-Oxley: the biggest source of fake news in Britain’ https://t.co/M9HexOOlfg

Luckily, many people are waking up to this:

How many more times does 'a source in No. 10 says' have to be bollocks before journalists stop uncritically quoting them?

Including a former Conservative MP:

When will journalists stop retailing the constant stream of bullshit emanating from No 10 “senior sources” aka Cummings and Cain? The PM won’t pull bill after winning second reading. He won’t call EU leaders urging them to refuse extension because that would be against the law.

It’s clearer than ever that Kuenssberg and Peston are right there at the heart of this Tory propaganda game. And with the country in crisis, that’s incredibly dangerous.