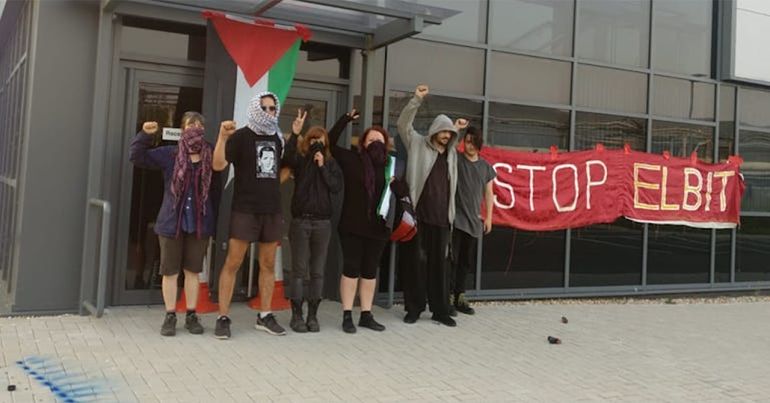 In August 2019, a group of activists held a two day long ‘siege’ of an Israeli arms company in Sandwich, Kent.

Campaigners entered the factory compound in the early hours of 27 August and remained there for two days. The activists barricaded the gates. And the factory was forced to stop work during the occupation.

One of the protesters told The Canary at the time:

We’ve occupied and barricaded Instro’s grounds to try to stop the company from making weapons which kill our friends in Palestine. I’m disgusted that arms dealers live in comfort, profiting from murder.

These people arm occupiers, so we are occupying them.

The arms company in question, Instro Precision, is a wholly-owned subsidiary of Elbit Systems. Elbit is Israel’s largest privately owned arms and security company, and one of the biggest weapons companies in the world.

Elbit supplies Israel with 85% of its drones, many of which are used to bomb Gaza. These unpiloted aircraft are used in ‘extra-judicial assassinations’. Israel’s drone attacks have killed over a thousand Palestinians in Gaza.

Elbit has also purchased Israeli Military Industries, the sole supplier of small calibre ammunition to the Israeli military. Campaigners believe that this makes the company complicit in the Israeli army’s murder of Palestinian participants in the Great Return March protests at the border wall between Gaza and Israel. Israeli soldiers routinely fire at protesters with live ammunition. According to the Palestinian Centre for Human Rights (PCHR):

Palestinians calling for a military embargo

The Palestinian Boycott National Committee has called for action against Elbit:

During the protests, activists discovered packaging and address labels with the logo of Turkish arms company Aselsan. Stop Elbit says that “this means that Israeli-owned Instro is developing weaponry and / or working with Turkey”.

The Turkish military is engaged right now in an invasion of Rojava in northern Syria. The invasion has already killed 120 civilians and displaced over 200,000.

Calls are being made for the UK to cancel all existing arms exports licenses to Turkey. But so far the British government has only announced a suspension of new arms exports.

A spokesperson for Stop Elbit-Instro Defendants Solidarity Campaign said in a press release:

The skilled engineers of Elbit-Instro could be working to make the world a better place, yet instead they are employed to build machines that incinerate children. Shame on them all.

A spokesperson for East Kent Campaign Against the Arms Trade said:

We know Instro have been granted export licenses to Turkey in recent years. There are urgent questions about whether Instro’s specialist targeting technology is employed by Israel for targeting Gazan civilians every Friday during the Great Return March civil rights demonstrations, or in maintaining the surveillance of Palestinians along its illegal separation barrier, enabling the occupation’s apartheid infrastructure.

The seven anti-militarist activists arrested during the siege of Instro will have their first hearing today at Folkestone Magistrates’ Court. They are expected to plead not guilty to the charge of aggravated trespass.

It’s anticipated that the full trial will take place next year.

Featured image via Block the Factory used with permission.