The duke and duchess of Sussex warned that the Commonwealth’s past wrongs need to be acknowledged in order to move forward, as they joined a discussion on justice and equal rights.

Harry and Meghan both took part in the video call with young leaders in one of the Queen’s Commonwealth Trust’s (QCT) weekly sessions set up in response to the growing Black Lives Matter movement.

The Commonwealth’s past mistakes

The duke, whose grandmother the Queen is head of the Commonwealth, last week outlined his personal commitment to tackling institutional racism. Harry said:

When you look across the Commonwealth, there is no way that we can move forward unless we acknowledge the past…

Meghan also touched on the Commonwealth’s past, saying:

In that self reflection, it’s acknowledging whatever mistakes we’ve all made, right?

So if we look at the Commonwealth, I know part of the conversation we’re going to explore later on is looking at the history of that.

The roots of the Commonwealth – a voluntary association of 54 nations – stretch back to Britain’s colonial past and the British Empire.

Nicola Brentnall, chief executive of the QCT, has written that the organisation is looking at:

how the Commonwealth’s past – of colonialism, of the subjugation of peoples and the ongoing legacy of such historic injustice” should shape its identity and future.

“This is a moment of reckoning”

What have we done in our past that we put our hand up? This is a moment of reckoning where so many people go ‘You know what, I need to own that. Maybe I didn’t do the right thing there’

The couple, who were speaking from Los Angeles, joined Chrisann Jarrett, co-founder of We Belong, which is led by young people who migrated to the UK, and Alicia Wallace, director of Equality Bahamas.

Also on the 1 July chat were Mike Omoniyi, founder of The Common Sense Network and Abdullahi Alim, who leads the World Economic Forum’s Global Shapers. 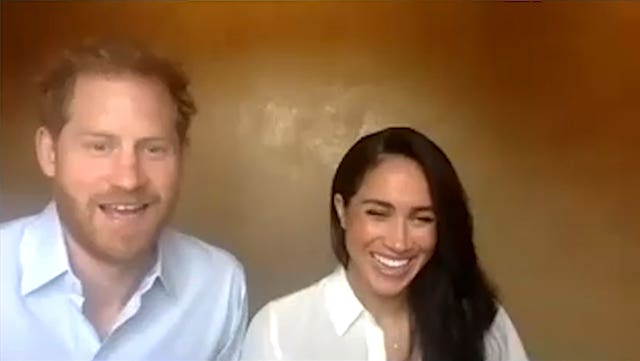 Harry addressed the issue of unconscious bias, sharing his own perspective:

However, once you start to realise that there is that bias there, then you need to acknowledge it, you need to do the work to be able to become more aware.

The duchess, who became the first mixed race person to marry a senior British royal, highlighted the “quiet moments” of unconscious bias as a key issue, drawing on her own “personal experience”:

It’s not even in the big moments right? It’s in the quiet moments where racism and unconscious bias lies and hides and thrives…

So much of what I’ve come to the understanding of, especially in learning even more about it of late, and obviously having had personal experience with it as well, in people’s complacency, they’re complicit.

After the Sussexes stepped down as senior working royals, Harry had to leave his role as commonwealth youth ambassador. But he and Meghan retained their posts as president and vice-president of the Queen’s Commonwealth Trust. 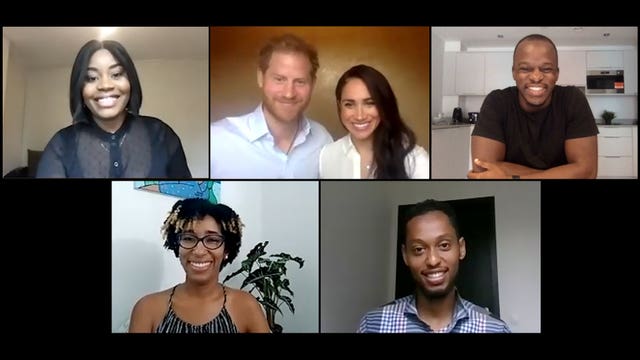 Harry told those taking part as they discussed the drive towards a more equal society: “This change is needed and it’s coming”. He added:

The optimism and the hope that we get is from listening and speaking to people like you, because there is no turning back now, everything is coming to a head.

The group discussed the Black Lives Matter movement and their own take on radical change. Asked by Meghan what the solutions were, Jarrett replied:

We all need to be in this for the long run.

This is not a hashtag… it’s about being persistent with the demand that change must come and we’re not going to stop until it comes.

Meghan spoke of how equality was a fundamental human right:

We’re going to have to be a little uncomfortable right now, because it’s only in pushing through that discomfort that we get to the other side of this and find the place where a high tide raises all ships…

Equality does not put anyone on the back foot, it puts us all on the same footing – which is a fundamental human right.