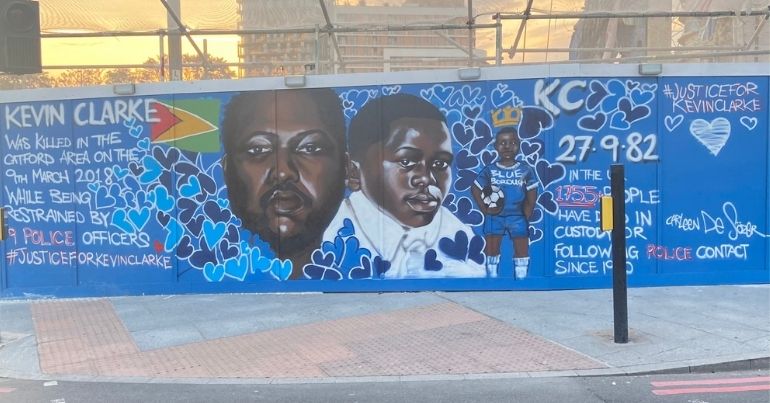 An inquest released on 9 October concluded that excessive use of force by Metropolitan Police Officers and “serious failures” by public service providers contributed to Kevin Clarke’s death in police custody.

According to INQUEST, the medical cause of Clarke’s death was “Acute Behavioural Disturbance (in a relapse of schizophrenia) leading to exhaustion and cardiac arrest contributed to by restraint struggle and being walked.” Clarke was experiencing a mental health crisis, and needed to be taken to a safe place. Instead, he was met with inappropriate restraint and negligence.

Evidence was heard at the inquest that the officers had recognised signs of mental ill health and were aware of the risks of restraint. In spite of this, Clarke was handcuffed with his hands behind his back, and had leg restraints placed on him. The police called an ambulance, but failed to communicate their concerns about his mental ill health.

The inquiry also highlighted serious failures involving the London Ambulance Service, which failed to provide basic medical care. Paramedics failed to conduct a complete clinical assessment of Clarke’s condition or provide clinical advice. They didn’t even bring their medical emergency bag. The lead paramedic told the inquest that she felt too scared to get close to Kevin.

Before his death, Clarke was under the clinical care of South London and Maudsley NHS Foundation Trust (SLaM), and lived in assisted housing for people with complex mental health needs run by the Penrose Jigsaw Project. The jury found that both service providers missed opportunities for earlier, less risky intervention, and failed to provide critical information to manage Clarke’s relapse and ensure his wellbeing.

Another victim of institutional racism

Clarke’s death sits in the broader context of disproportionate deaths of Black people following the use of force and neglect in police custody. It also speaks to the persistent criminalisation of Black people, particularly those suffering from mental health issues. Clarke, like so many others, should have received mental health first aid from a medical professional rather than inappropriate, inhumane restraint at the hands of police.
Wendy Clarke, Kevin’s mother, said:

[Kevin] was loved by many and will be missed dearly. In his memory we want to see accountability, and real change, not just in training, but the perception and response to Black people by the police and other services. We want mental health services better funded so the first point of response is not just reliant on the police. There must not be another George Floyd, Sean Rigg or Kevin Clarke.

There is an urgent need for structural and cultural change in policing, mental health and healthcare services. One which ends the reliance on police to respond to public health issues, and which confronts the reality of institutional racism in our public services.

Clarke was systematically failed by a number of services which were supposed to protect him, and he is not alone in this. In England and Wales, there have been over 1,760 deaths in police custody or following police contact since 1990. People from Black and ethnic minority backgrounds are overrepresented in these figures. As Clarke’s mother highlighted, we need to challenge structural racism in all public services, proper funding for community support and mental health services, and to move away from the use of police as first responders in mental health emergencies. If we don’t see root and branch change – and fast – there will be many more brutal, unnecessary deaths just like Clarke’s.