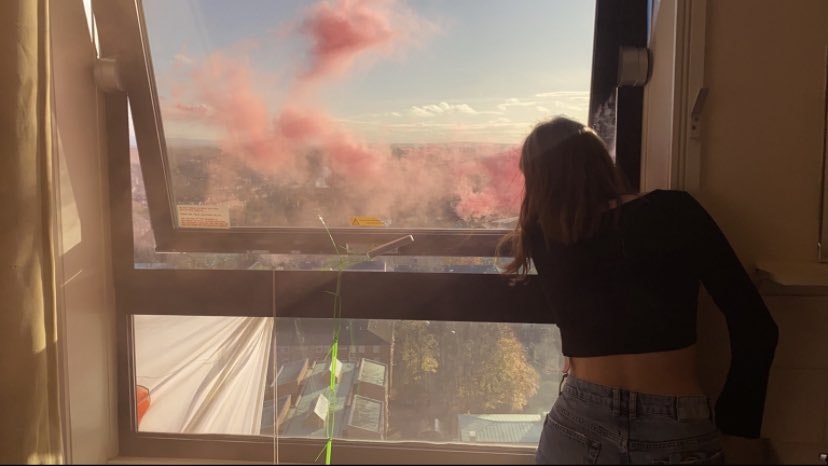 Students have occupied a University of Manchester building in protest against paying high fees despite living in “appalling” conditions amid the coronavirus (Covid-19) pandemic. The students are seeking a reduction to their rent and £9,000 tuition fees after face-to-face classes were halted and a series of issues with their accommodation.

“This is an occupied building”

They arrived at the OwensPark Tower, which the university has said is unoccupied, at 10am on 12 November, unveiling large banners and lighting flares from its windows.

They said they are sticking to coronavirus (Covid-19) guidelines and have enough food and supplies to stay for at least a week. Politics and sociology student Ben McGowan told the PA news agency:

We have enough resources and solidarity funding from other groups to mean we can stay here for as long as possible and to be honest it’s nicer than my usual halls. We’ve had appalling accommodation conditions ranging from flooding to leaks and rat infestations.

We have a severely under resourced mental health support network even though mental health amongst students has never been more dire. Last week it reached boiling point with the fences around campus – now we’re expected to pay rent for December when Government guidelines mean we won’t even be in uni halls for the whole of December.

Last week, Manchester students tore down fences erected outside their campus in Fallowfield at the beginning of a second national lockdown.

A University of Manchester spokesperson said:

We are aware of the protest by a handful of students in an empty residential building. We have made it clear to them that they shouldn’t be there and that they may also be in contravention of current national Health Protection Regulations.

We are already engaging with elected Students’ Union representatives about many of the issues being highlighted by the protestors. The University is fully committed to freedom of expression.

Students in England will be allocated staggered departure dates during a “travel window” between December 3-9 so they can return home after the four-week lockdown. McGowan said the university has repeatedly refused to meet with students about the issues they face – with students looking for 40% off their rent bills. He added: