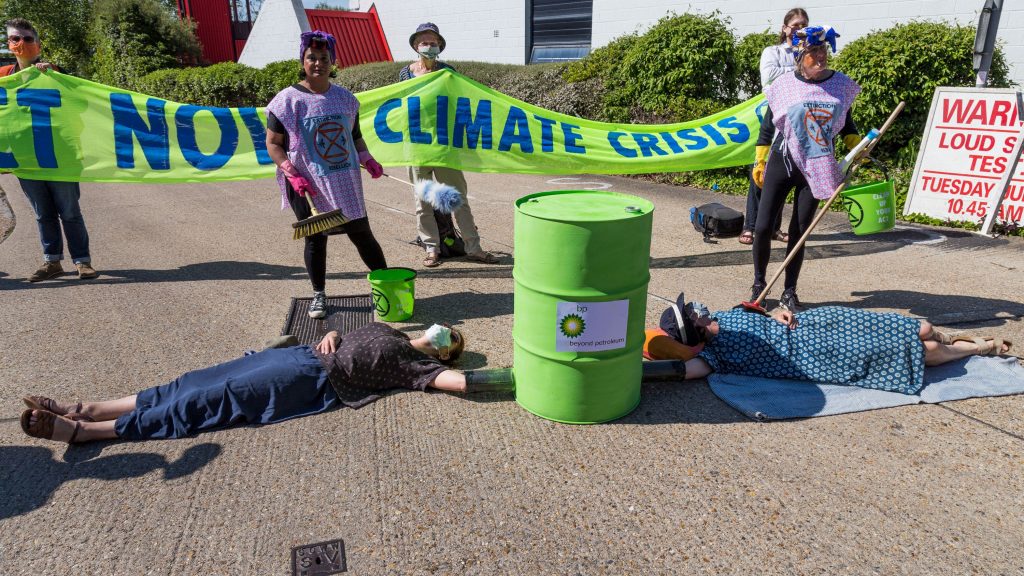 A BP oil terminal which supplies petrol stations across the south of England is being blockaded by Extinction Rebellion activists highlighting government and fossil fuel industry “greenwash” policies.

Four protesters locked to oil barrels are lying across the entrance to the facility in Hamble, Hampshire, preventing tanker lorries from accessing the site.

Other demonstrators have dressed up as cleaning ladies to remove layers of green paint on the drums which have slogans on them saying: “Broken promises / Burning Planet” and “Govt MER Strategy / Maximises emissions”.

The protest is one of several being held by the group ahead of the G7 summit in Cornwall.

The Government continues to announce paper targets to reduce emissions but it is still business as usual for fossil fuel companies.

There is new exploration, new 20-year production licences and new investment in fossil fuel infrastructure locking us into future greenhouse gas emissions at a time when the fossil fuel phase out should already be under way.

The UK Government’s policy is for Maximum Economic Recovery (MER) of oil and gas; this is incompatible with the urgent need for rapid transition away from fossil fuels to limit global heating to 1.5 degrees.

We call on the Government to stop the greenwash, to scrap their MER strategy, end the subsidies to the fossil fuel industry and accelerate the transition to renewables.

Road tanker traffic in and out of the Hamble terminal, operated by BP, is currently blocked by a demonstration.

The terminal supplies fuel to service stations in the south of England that are operated by a wide variety of companies.

Our priority is ensuring the safety of people and operations. BP supports the goals of Paris Agreement and our ambition is to be a net zero company by 2050 or sooner.

Extinction Rebellion is one of several groups organising protests against the upcoming G7 summit in Cornwall. The Resist G7 Coalition has called for three days of action and Fridays for Future is holding its first post-pandemic climate strike in England on Friday 11 June.