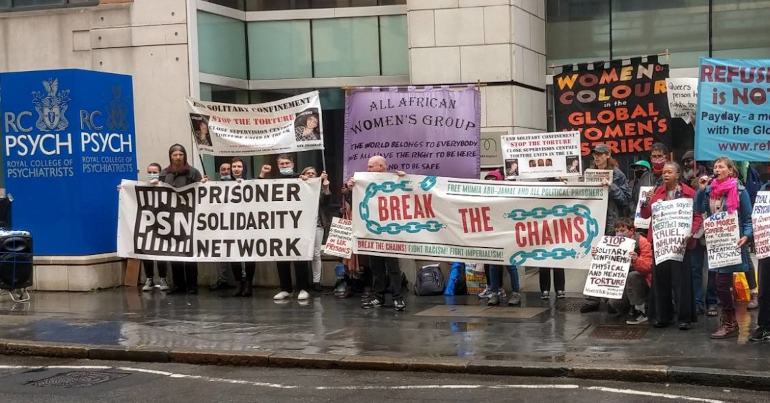 A demonstration was held on 28 June outside the headquarters of the Royal College of Psychiatrists (RCPsych) over the organisation’s support for the UK’s Close Supervision Centre (CSC) System.

The protest – called by a coalition of groups – was joined by ex-prisoners and the families of current prisoners.

A press release from the coalition of groups reads:

Former prisoners [joined] a gathering called by a coalition of groups outside the Royal College of Psychiatrists (RCPsych) to protest its endorsement of Close Supervision Centres.

The UK’s CSCs are prisons within prisons, where people are kept isolated for years with very little human contact. CSC prisoners face the “most restrictive conditions” seen in the UK prison system.

RCPsych is a professional medical body representing psychiatrists in the UK. However, prisoners and their supporters argue that the CSC system it endorses causes damage to mental health. A UN representative has said the system may amount to torture.

Solitary confinement is in breach of international human rights standards

According to the campaigners’ statement:

CSCs are prisons within UK prisons — segregation units where prisoners are locked in their cell 22 or more hours per day for months or years with no independent right of appeal. This level of confinement and deprivation of contact with other human beings is comparable to “solitary confinement”.

Being held in solitary confinement for more than [15] days is a breach of the UN Mandela Rules on the treatment of prisoners.

The UK’s CSC system has been criticised by international human rights organisations:

Amnesty International condemned CSCs (formerly SSUs) as far back as 1997 as “cruel, inhuman or degrading treatment”.

However, the RCPsych has rubber stamped this brutal prison regime as ‘positive’. According to campaigners:

Shamefully the RCPsych, whose primary duty should be the welfare of patients, instead endorses CSCs as “Enabling Environments“, that is places where there is a focus on creating a “positive and effective social environment”.

Kevan Thakrar, a prisoner who has spent 11 years inside the CSC system, wrote in Inside Times:

The cost of each place is over five times a place in a maximum security main location, the brutality inflicted upon the prisoners within them exceeds all other prison environments in the UK, and they cause the majority of its residents to develop major mental illness requiring treatment within the secure hospitals of Broadmoor, Rampton or Ashworth under the Mental Health Act.

Kevan is currently struggling to be moved out of the CSC. He was placed in the system after defending himself against a racist attack by a prison guard in 2010. He was cleared of assaulting the guards, on the grounds of self-defence. But he remains stuck in the CSC system.

It’s not surprising that Kevan has found it hard to get out of the CSC, as a 2015 HM Inspectorate of Prisons report found that there was no independent scrutiny of decision making within the CSC system.

The UN special rapporteur wrote in March this year:

we express our grave concern at the indefinite and prolonged detention of Mr. Thakrar in what appears to be conditions of solitary confinement. Both in this individual case and in terms of general policy, we are particularly concerned at the reported use of prolonged or indefinite solitary confinement in Close Supervision Centers, thus predictably inflicting severe pain or suffering amounting to cruel, inhuman and degrading treatment or punishment, or even torture.

“Fed through a hatch and isolated from family and outside support”

Other prisoners describe being fed through a hatch and isolated from family and outside support. They speak of attacks from guards that remain unpunished and complain that there is no transparent process to decide who is placed in the CSC and therefore “no way out”.

Approximately 50% of prisoners held in CSCs are Muslim which indicates that these units are institutionally racist. This is not the only time that the RCPsych has been called out for racism. Last year more than 160 psychiatrists wrote to the RCPsych urging it to “root out all examples of institutional racism and colonial mentality”.

The campaign calling on RCPscych to drop its endorsement of CSCs has broad support:

The campaign demanding that the RCPsych withdraw its endorsement of CSCs is backed by more than 60 organizations and hundreds of individuals, including Prof. Angela Davis, author and anti-racist campaigner Selma James, former Chief Inspector of Prisons Lord Ramsbotham, miscarriage of justice victim Winston Silcott, Prof. Benjamin Zephaniah and a number of practicing psychiatrists.

The Canary contacted RCPscych for a comment, but we’d received no reply by the time of publication.

“CSCs and solitary must end!”

Sara Callaway from Women of Colour Global Women’s Strike – one of the groups who called the protest –  said:

We are part of this campaign because CSCs are racist and women end up picking up the pieces when men are abused within them. We will be making our voices heard until the RCPsych stops covering up for cruel, inhuman and degrading treatment. This campaign was initiated by prisoners and is growing in size – CSCs and solitary must end!

Featured Image provided to The Canary with permission