Keir Starmer will not resign if Labour loses the Batley and Spen by-election, his spokesperson has said, on the eve of a vote that could prompt a period of increased and further turmoil for his leadership.

The Labour leader’s spokesperson insisted on 30 June that he’s on a “four-year path” to lead the party back into power and would not be standing down if he oversaw yet another electoral defeat.

There are concerns within the party that it could be seized by Boris Johnson’s Conservatives on 1 July. New polling has suggested that as many as four in 10 Labour members would want Starmer to stand down and make way for new leadership in the wake of a loss there.

Starmer’s spokesperson played down the prospect of a victory by saying it “has always been a marginal seat” and that winning “was always going to be challenging”. The West Yorkshire constituency has voted Labour since 1997.

“Keir is not going to resign” said the spokesperson, when asked by journalists at a Westminster briefing.

Keir has been absolutely clear that this is a four-year path to get back into power and he is determined to lead the party into the next general election and to take us back into Government.

According to YouGov, Starmer’s approval ratings have notably worsened over the course of the first year of his journey: 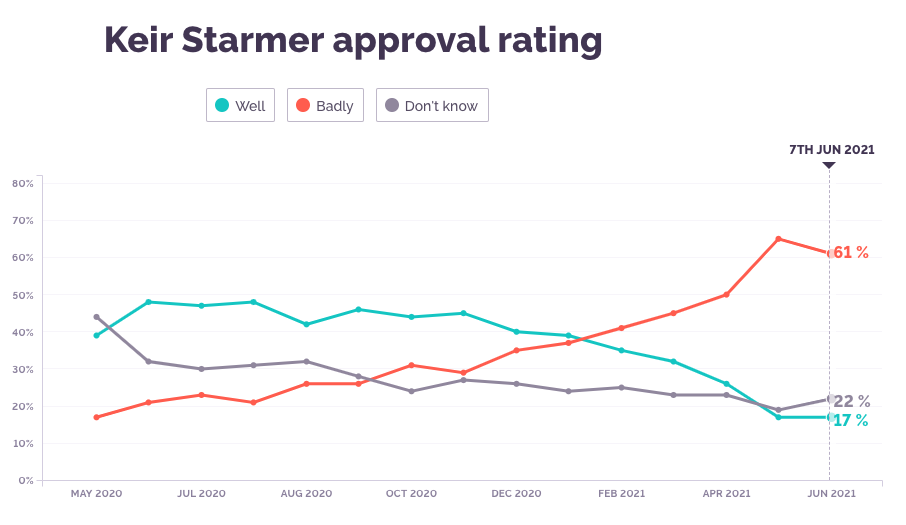 The spokesperson’s comments came after 41% of members in the YouGov poll for Sky News said they would want him to stand down and make way for fresh leadership if Batley and Spen is lost. But 48% would back Sir Keir to remain in place regardless, according to the survey of 871 members conducted over the past week, which had the remaining 11% as yet undecided over his fate.

The research also suggested that 69% of Labour members would prefer Andy Burnham as leader, despite the Greater Manchester mayor no longer being an MP and therefore being unable to immediately challenge Starmer in any contest.

Though Burnham is the clear favourite, Home Affairs Committee chairwoman Yvette Cooper is the favourite current MP in the event of a sudden leadership contest. Some 35% of members said she would be their first preference, with shadow foreign secretary Lisa Nandy on 13%, and deputy leader Angela Rayner on 12%.

There is a prospect of a backbench revolt if Batley and Spen is lost, but it’s unclear if any challenger would be able to secure the support of the 40 Labour MPs needed to trigger a leadership contest.

“Everyone will be watching Batley and Spen,” said one backbencher, who said a poor result for Labour could suggest “there’s potentially another 20-50 seats across the north that we are going to lose”.

Labour officials are pessimistic about the chances of defending the former seat of Jo Cox, who was murdered in the constituency in 2016. A Survation poll published last week put the Tories on 47%, up 11% from the 2019 general election, while Labour was on 43%.

The Batley and Spen by-election was triggered after Tracy Brabin, who won the seat for Labour in 2019 with a 3,525 majority over the Conservatives, was elected as the mayor of West Yorkshire in May.

Labour lost Hartlepool in its traditional heartlands to the Conservatives last month, and it also polled poorly in the Chesham and Amersham by-election.