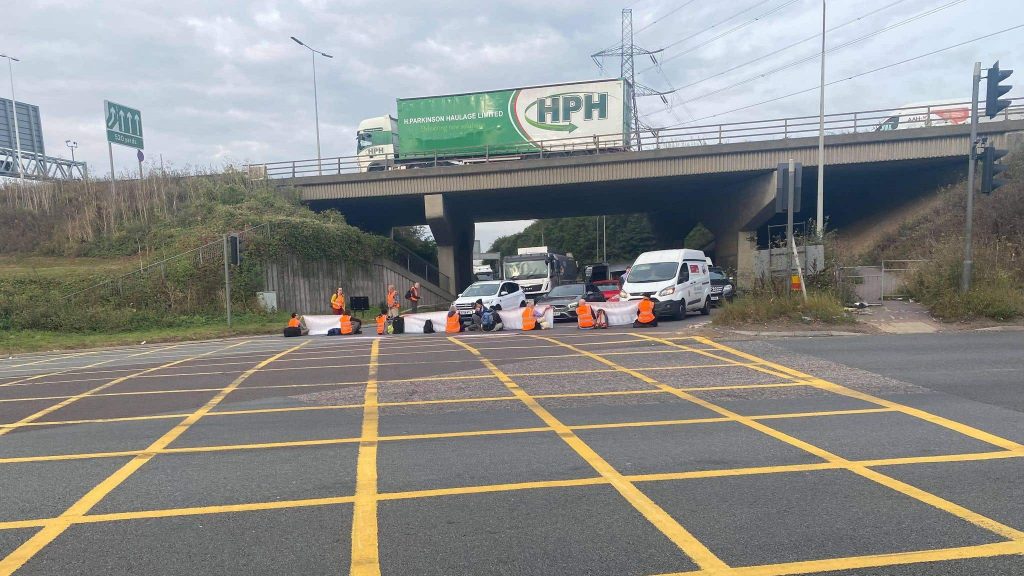 Protesters demanding government action on home insulation partially blocked several junctions on the M25 on the morning of 13 September.

Tens of thousands of motorists attempting to use the UK’s busiest motorway faced long delays while activists sat on the road holding banners.

National Highways said there was disruption at Junction 3 for Swanley in Kent, Junction 6 for Godstone in Surrey, Junction 14 for Heathrow Terminal 5, Junction 20 for Kings Langley in Hertfordshire, and Junction 31 for Purfleet in Essex. Essex Police said 12 people were arrested at Junction 31 on suspicion of highways obstruction.

This incident caused significant disruption and our officers worked to resolve it as quickly and safely as possible.

I want to thank the drivers affected for their patience and understanding.

Surrey Police said a number of protesters were arrested at Junctions 6 and 14. A group named Insulate Britain said it was behind the demonstrations.

It describes itself as:

a new group demanding that the Government gets on with the job of insulating Britain’s homes.

Its website warned that the disruption is “just the start”, and “action will continue until the Government makes a meaningful commitment to insulate Britain’s 29 million leaky homes”.

At times things turned violent as motorists attacked the protesters:

One supporter, Liam Norton, a 36-year-old electrician from London, said he is “shocked at the lack of significant action from our Government”.

It’s a no brainer. Insulating Britain will reduce emissions, provide hundreds of thousands of jobs and stop our elderly dying in cold homes each winter. So stop messing about, Boris, and get on with the job.

As soon as a statement is made that we can trust and is meaningful, we will get off the roads.

Boris needs to stop making things worse – with all their road building, airport expansion, HS2 white elephant and new oil fields – and get on with the obvious stuff like insulating the 29 million homes that need to come off fossil fuels.

We can’t get to net zero if they don’t take responsibility for this. Only the Government can make this happen.

We're not here to #BlockBorisJohnson

We'll go home when you #getonwiththejob.
Only you can create hundreds of thousands of jobs, save lives & lead the world through this crisis.

This action is not only incredibly dangerous in potentially putting lives at risk but it also backfires in environmental terms by causing more delays and more vehicle emissions.

The Twitter account for Have I Got News For You made a similar point – but it was informed by its followers that many modern cars can be turned off when not in use:

Sensible drivers turn their engines off when stationary. Modern cars do this automatically. I guess that you are still driving Model T Fords

King went on to point out that the action would cause inconvenience – in effect describing how protesters use disturbance to generate attention for their cause:

These are some of the busiest sections of the M25 where tens of thousands of drivers will have been affected and has a negative knock-on effect on economic activity.

We work hard with police and other partners to limit the effects of protests on the strategic road network.

We will do all we can to keep drivers up to date and on the move.