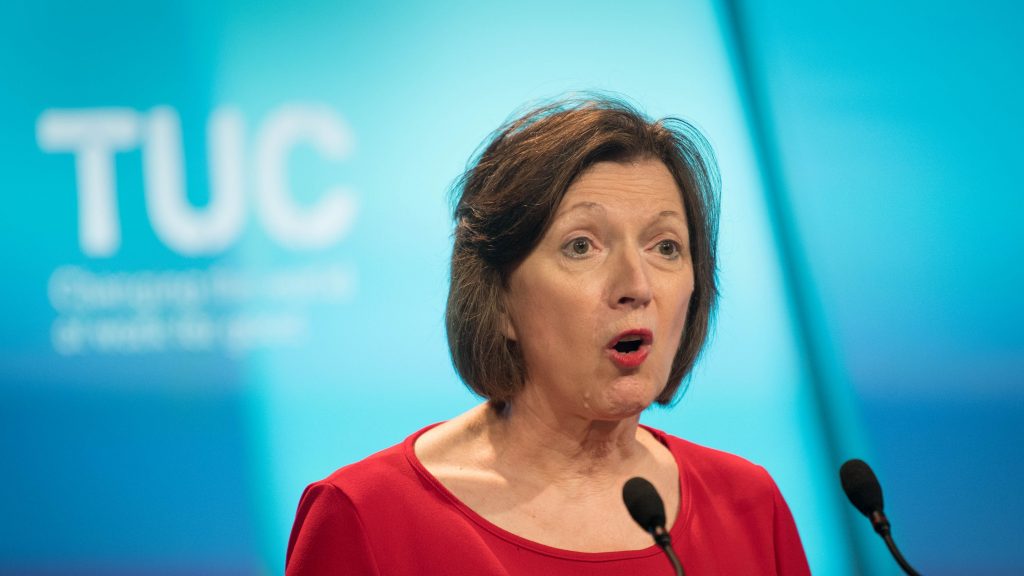 The coronavirus (Covid-19) could have been slowed down if decent sick pay was available, care workers had got proper PPE, and bad bosses who put staff safety at risk had been prosecuted, according to a the general secretary of the TUC.

At the same time, the chair of doctors’ union the British Medical Association (BMA) is set to say that chronic neglect of the NHS and a lack of preparedness before the pandemic, along with flawed government thinking, has added to the tragic impact of coronavirus.

Frances O’Grady, general secretary of the TUC, said the virus crisis should be a catalyst for real change in the workplace. Speaking to the TUC’s annual Congress in London, she said years of austerity had taken its toll. And it meant the pandemic was fought “with one hand tied behind our backs”.

The people who keep essential supplies moving should matter too. But after long hours, many HGV drivers are sleeping in their cabs on lay-bys, no payments for truck stops, no place to wash, no toilet facilities. Treated worse than animals.

Ministers may scratch their heads about how to protect supply chains and fill vacancies. Well, here’s a novel idea: invite unions in with employers. Get us around the table, and let’s make that industry deliver decent conditions, direct employment and a proper pay rise.

After decades of real wage cuts and falling living standards, no-one can seriously say working people don’t deserve a pay rise. If pay had continued to grow at its pre-crash rates the average worker would be £5,900 better off.

“On a different planet”

O’Grady said ministers seemed to live “on a different planet”. Because they failed to understand that not everyone had gardens they could work from, or could survive on the current level of sick pay, or be aware of how working women had coped with childcare during the pandemic. Challenging the prime minister to deliver on his promises to level up Britain, she added:

Ministers tell us they’re going to level up Britain. But levelling up means nothing if they freeze key workers’ pay, slash Universal Credit, and the number of kids in poverty soars.

In the pandemic, unions have shown the value we bring. When we are in the room and our voices are heard.

But look at the price we all pay when unions are shut out and ignored. Who can doubt that we could have slowed down the virus, if everyone had had decent sick pay?

Or if care workers had got proper PPE from the start? Or if bad bosses, who put staff safety at risk, had felt the full force of the law – prosecuted and fined?

According to Dr Chaand Nagpaul, the NHS was already in crisis before the pandemic struck. Waiting lists were at an all-time high and and there were record waits for cancer treatment. Plus there were almost 90,000 staff vacancies. In a speech to be given at the BMA’s Annual Representative Meeting, he’s set to say:

We will not accept a return the old pre-pandemic NHS, which was so patently under-staffed and under-resourced, where nine in 10 doctors are afraid of medical errors daily.

We will not accept an NHS running at unsafe bed occupancy and without spare capacity.

We will not accept an NHS unprepared for a pandemic, without vital PPE to protect the health and lives of health and care workers.

We will not accept an NHS in crisis every summer, let alone every winter.

We will not accept a nation bereft of public health staff, facilities and testing capacity, with ministers then paying billions to private companies who were unable to deliver.

The UK has seen more than 130,000 people die with coronavirus since the pandemic began. And there were 12,000 excess non-coronavirus deaths in 2020, the BMA says. Nagpaul suggests that the so-called Freedom Day on 19 July, when many restrictions were eased, was a “gamble”. It has since then contributed to almost 40,000 hospital admissions and more than 4,000 deaths.

Nagpaul also has concerns about how far recently announced additional funding for the NHS and social care will stretch, as it continues to deal with the pandemic and a backlog of cases. The government is increasing national insurance, ostensibly to provide the additionally funding. However, the hike has in turn been criticised for targeting the lowest-paid workers instead of the rich.

The government plans to raise £12bn extra a year for the NHS and adult social care through a rise in national insurance next spring.

The NHS will get most of the share for the first three years, with £5.3bn allocated to social care. £500m of this will be spent on workforce training and recruitment. Ministers say social care will get more money after this window as the £86k cap on costs, which will come into force in October 2023, starts to require funding.

We have backed the health service at every turn, with an extra £29 billion to support health and care services on top of our historic settlement for the NHS in 2018.

At the same time, we are backing the NHS with a further £36 billion for health and social care and a ring-fenced £8 billion to tackle backlogs and help the NHS deliver an extra nine million checks, scans and operations for patients across the country.

Health columnist Andy Cowper has argued that the plan is “not nearly enough to fix social care”. NHS staff, medical workers’ unions, healthcare charities, and activist groups have repeatedly criticised the Conservatives’ handling and underfunding of the NHS.