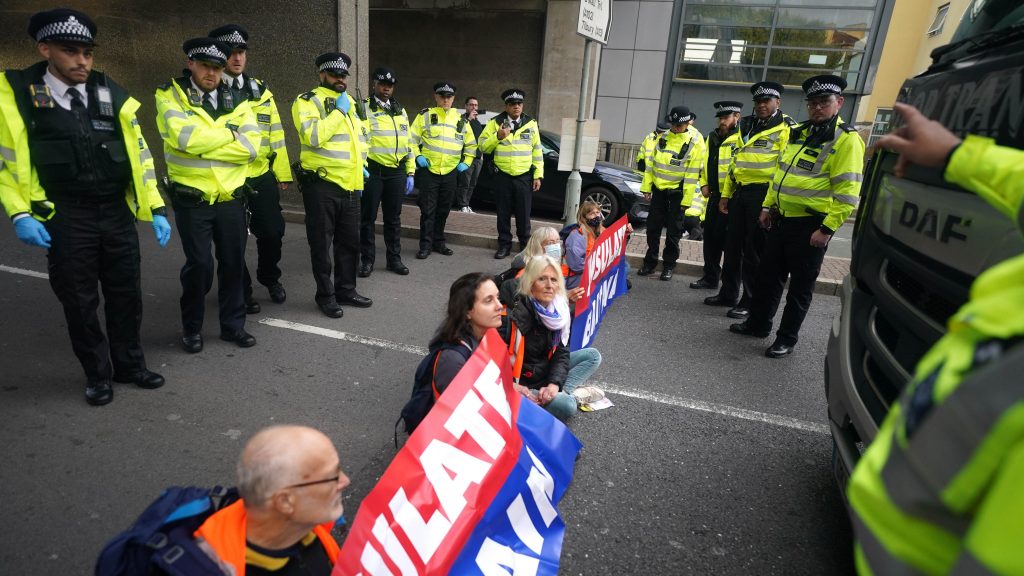 More than 50 people have been arrested after Insulate Britain brought London’s financial districts to a standstill. The City of London was recently exposed in the Pandora Papers, and the New York Times accused it of ‘hiding the world’s stolen money’.

The heart of wealth run amok

Protesters took to the streets of the City of London and Canary Wharf at around 8am on 25 October, disrupting rush-hour traffic. Officers from the Metropolitan Police and City of London Police attended to negotiate with activists, who sat in the road at the junction of Bishopsgate and Camomile Street, close to Liverpool Street.

Demonstrators who superglued their hands to the ground were released by officers before being arrested and led to police vehicles. As she was released, one woman claimed she was “in agony”.

Members of the public approached the protesters, with some saying they were “doing a good job”. Others shouted at them as they passed by.

One man walked up to the protesters and said:

Why are you doing this? Get a job. I was trying to get to work and have had to walk just to get there. I pay my taxes.

The activists did not reply and the man left the area.

One of the protesters, Emily, said she has been arrested 14 times for her involvement in demonstrations. Another, Tony Hill, 71, said he had travelled from near Kendal in Cumbria to the capital to take part.

I’m here today out of anger, fear and determination. The anger that my Government is failing the people of our country. The governments of the world are failing everyone. Everyone says we’re at the 11th hour but we’re at midnight and nothing substantial is being done by our Government and the governments across the world.

We’re saying insulate as many buildings as we can. It’s a no brainer. It’s something we can all do, it’s a solution. We’ve got the money; all we need is the will power from our Government to do it. It will save money, create jobs, save lives and save the planet. Why aren’t they doing it?

Invest in the future

By midday, the last of the protesters at the junctions of Bishopsgate and Camomile Street had been removed from the scene. Police left the area and traffic was flowing freely again.

Leaflets handed out to members of the public by protesters apologised for the disruption. The flyers said Insulate Britain is asking the UK government to invest in homes across the country to make them free of fossil fuels.

Dear driver, we are peaceful and non-violent. We are sorry to delay your journey. For your safety please stay in your vehicle and do not drive on the hard shoulder, this is for emergency vehicles. The police are on their way. They will arrest us and you will be able to continue your journey.