Climate memorial set up in London ahead of COP26 - Canary 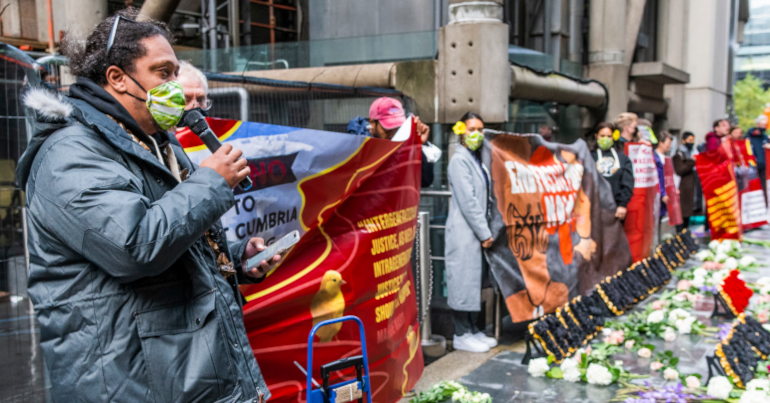 On Friday 29 October, climate activists set up a ‘climate memorial ahead of the COP26 climate summit, which is being held in Glasgow this week.

According to the campaigners’ press release:

on the eve of COP26 climate talks, Coal Action Network were joined by Youth Strikers from across the world and the Pacific Climate Warriors, to set up a climate justice memorial at Lloyd’s of London HQ (1 Lyme Street). The climate memorial was created to remember communities on the front lines of climate breakdown, who are being directly impacted by harmful projects and climate impacts.

The campaigners explained why they chose to set up the memorial at Lloyds of London insurance market:

Lloyd’s of London is an insurance market, composed of many underwriters and insurance companies. Lloyd’s is known for insuring projects that no one else will, which increasingly includes climate-destroying fossil fuel projects, making it a major global energy insurer.

Lloyds must rule out “insuring all fossil fuels”

Lloyds of London won’t rule out insuring the projects that are contributing to climate catastrophe. According to the campaigners:

Staff were asked to speak to senior management in Lloyd’s about ruling out insuring all fossil fuels, as well as, various fossil fuel projects including the Adani Coal mine [in Australia], tar sands, TransMountain pipeline [both in Canada], West Cumbria coal mine, and the Cambo oilfields [in the Shetland Islands].

The group also called on Lloyd’s to rule out any possible involvement with the Silvertown Tunnel [in Newham], and for Lloyd’s to pay compensation for climate impacts.

Stop ignoring the “communities being affected by climate breakdown“

the memorial brought to life the memories of every person harmed by the injustices of the climate crisis. We’ve laid wreaths naming climate wrecking projects we want Lloyd’s of London to rule out underwriting today, and help to prevent billions of lives being destroyed by climate impacts. Lloyd’s needs to stop ignoring the climate science and communities being affected by climate breakdown.

Groups representing the people most affected by climate change joined the memorial outside Lloyds of London:

Protesters were joined by 20 Friday for Future MAPA (Most Affected People and Areas) youth strikers from some communities most affected by climate change globally (including Bangladesh, Philippines, Argentina, Nigeria). Members of the Pacific Climate Warriors who have been calling on Lloyd’s to stop insuring the Adani Carmichael coal mine, brought flowers native to the Pacific Islands to add to the memorial. Representatives gave testimonies from their communities, which included those on the front lines of fossil fuel projects and climate impacts.

Our communities grapple with climate impacts everyday. As sea levels rise we risk losing everything. The insurance industry should also understand the business risks of climate change. Climate fueled disasters like hurricanes and wildfires are costing the industry billions. It is in our shared interests to act by stopping the major driver of global warming: coal. Lloyd’s of London must show leadership now and act on the climate crisis by refusing insurance for climate wrecking coal projects like Adani’s Carmichael mine in Australia.

Banks need to “decolonise their business”

I am in the UK to ask the banks and companies to decolonise their business. UK companies like Lloyds of London are supporting fossil fuels and we want them to shift this to renewable energy. Lloyds of London needs to sort out their act.

Patience Nabakalu from Uganda joined the protest because of having to live with climate breakdown:

We live a life of floods every day, and I am traumatised by it. I couldn’t go to school because of flooding. I learned that this all happens because of climate change. I had no option but to wake up and act.

Lindsay Keenan, of international campaign, Insure our Future, has been trying to engage Lloyds of London about its policies. She said:

We tried for at least 6 months to engage Lloyds in negotiations about its climate policy. Lloyds approach to the climate and its ongoing insurance of the world’s worst fossil fuel projects is greenwash, delay, and business as usual. Frankly Lloyds is a disgrace and needs much more public and regulatory attention to make its senior managers start to take climate science and its responsibilities seriously.

This is not the first such action to target Lloyds of London, and it forms part of a global campaign to bring the reality of the climate crisis to the doorsteps of global financial and insurance institutions.