XR has been out targeting failing public transport in Bristol 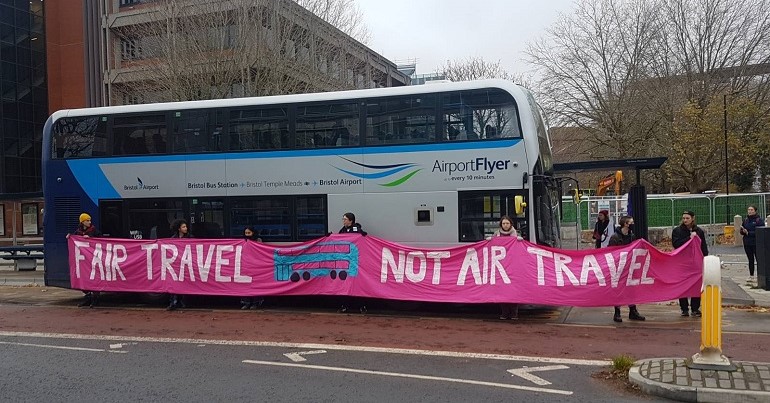 Environmental activists have once again stopped the Airport Flyer service in Bristol. In part, they’re protesting the reduction in ‘public’ transport which doesn’t support the carbon-intensive air industry. It goes further than that, however, as the Extinction Rebellion Youth Bristol (XRYB) activists also have a list of demands:

Another airport flyer bus has been stopped by @XRYouthBristol whindemand fair travel, not air travel. pic.twitter.com/vPr2xZ88Rr

The protest follows a similar action covered by the Canary on Saturday 5 November:

FirstBus are increasing the Airport Flyer frequency to support Bristol Airport expansion, whilst cutting 18 bus routes in the West of England.

That's why we held an Airport Flyer at Temple Meads for 2hrs today, demanding fair travel, not air travel! pic.twitter.com/izFU9kKRvm

XRYB announced the latest protest in a press release:

At 12:30pm today, youth environmental activists blocked an Airport Flyer bus on Redcliffe Way on its way to the City Centre.

Activists from Extinction Rebellion Youth Bristol (XRYB) blocked the bus’ path by standing around it with banners (including one reading ‘Fair Travel not Air Travel’) as it attempted to leave a bus stop on Redcliffe Way earlier today, with other activists hanging banners out the windows. The bus was returning from the airport to the City Centre, so no passengers were at risk of missing flights.

According to Extinction Rebellion, activists blocked the bus for two and a half hours. 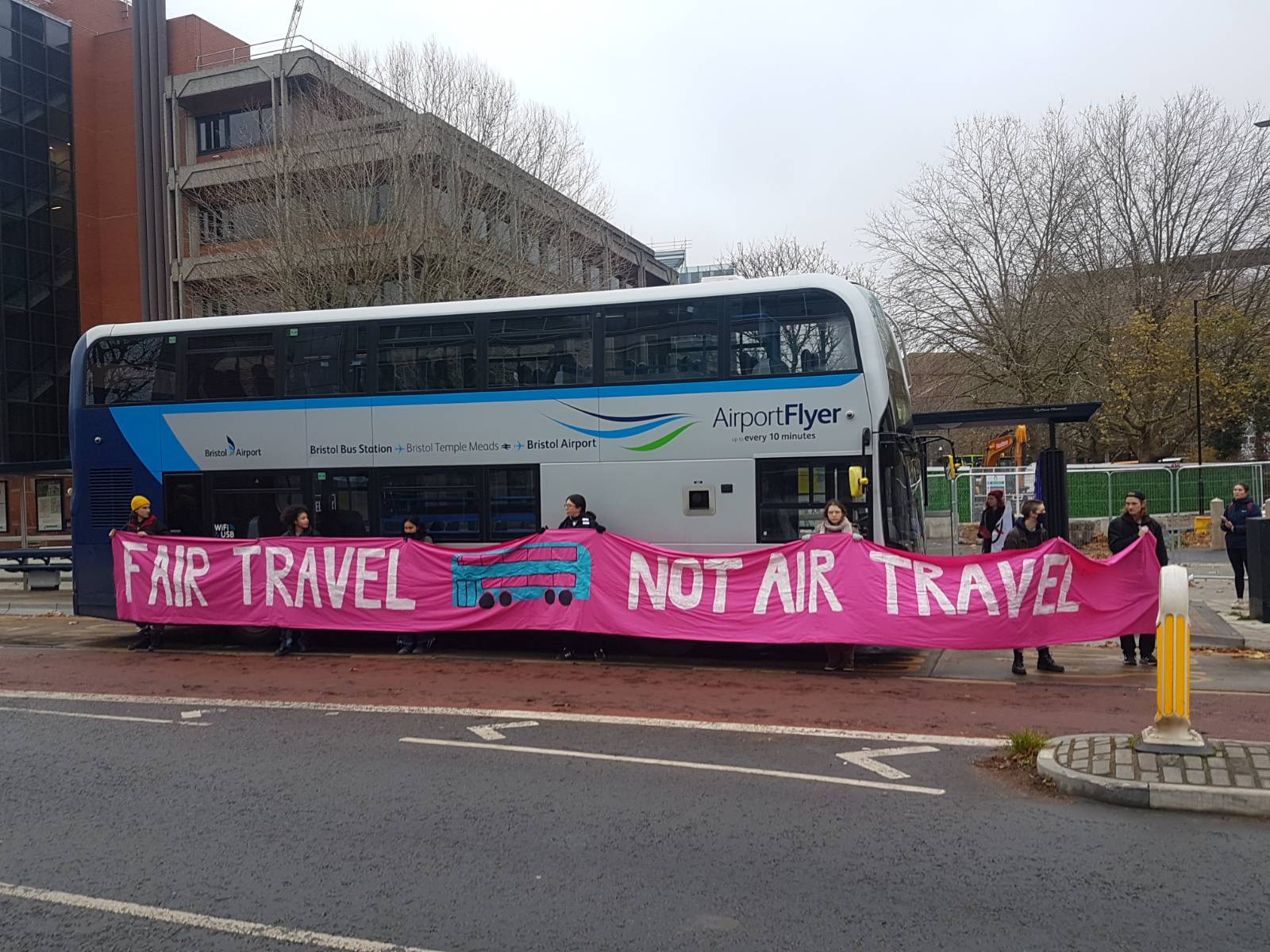 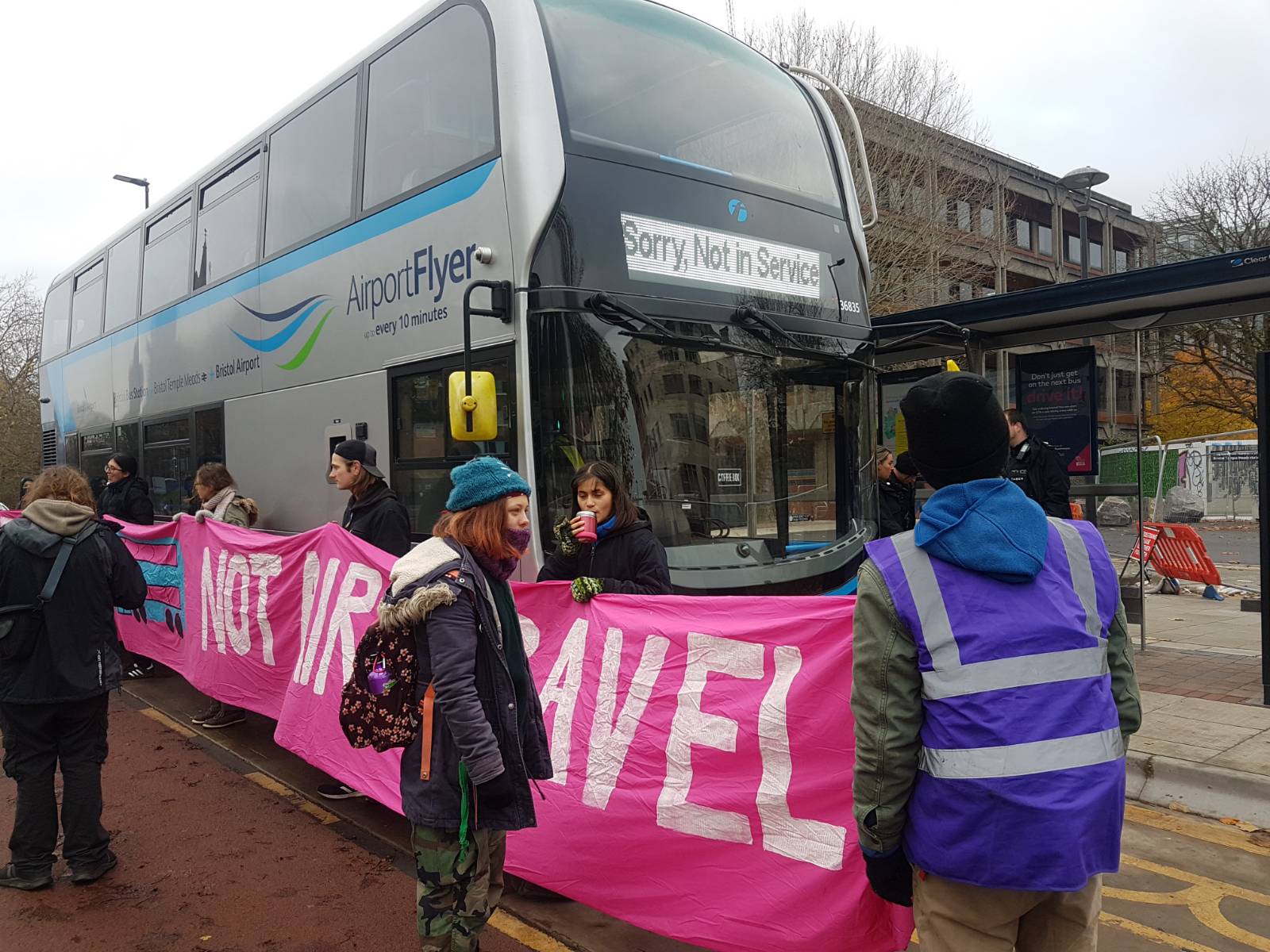 The previous action took place days before the High Court heard arguments on Bristol Airport’s expansion. We reported at the time:

On 8 and 9 November, the High Court hears arguments on the expansion of Bristol Airport. XRYB points out that the expansion will significantly increase the quantity of carbon dioxide and equivalent greenhouse gases released into the atmosphere each year. XR Youth previously held a ‘die-in’ protest inside the airport terminal in March.

The protests were both part of XRYB’s ‘Free Buses, Fair Buses’ campaign that was launched in June. Alongside other groups, XRYB forms part of the ‘Reclaim Our Buses’ campaign – a coalition pushing for bus franchising in the West of England. Franchising in this instance would mean an end to unfettered deregulation, with councils regaining control over how bus services are run. An open letter to the relevant local authority reads:

The private bus companies are entirely profit-driven, so they’re justifying the bus cuts with the falling passenger numbers, rising fuel and wage costs, and driver shortages that make the services unprofitable with no regard for the public need. Further, the financial support from the government during the pandemic will soon end and the private bus companies are not obliged to continue running services that don’t make them profits. This deregulated market is always at odds with the bus services that many in our communities need to get to work, school, shops, and health centres.

FirstBus recently announced the cancellation of nearly 1,500 bus services a week across Bristol, continuing until at least April. This follows on from plans to cut up to 18 bus routes across the West of England … whilst also increasing the frequency of Airport Flyer buses from Bristol from every 20 to every 12 minutes.

XRYB’s demands to the West of England Combined Authority and its constituent local authorities are:

Free buses: Free bus travel within the West of England (including North Somerset) for all those under the age of 25, all students, and all apprentices.

Fair buses: A consultation and public forum is run to identify improvements to bus routes that would best serve communities.

We are continuing to disrupt the Airport Flyer service because FirstBus have increased the scale of their cuts to the West of England’s buses. Our public transport network is in a dire state – FirstBus have shown that they are more interested in serving the potentially expanding Bristol Airport instead of our local communities.”

Metro Mayor Dan Norris needs to take urgent action and introduce bus franchising in order to prevent further deterioration of these vital services – it’s time for WECA to step up and reclaim our buses.

We've out been spray painting bus stops with a clear message – this bus could be free!

Our bus network is broken – it's time for free bus travel for young people and a fair network that works for everyone@WestofEnglandCA @votedannorris @FirstBSA pic.twitter.com/uodA2C41fT

Given this is now the second action over buses by XRYB in a month, it’s likely there are more to come.

Featured image via and additional images via James Ward