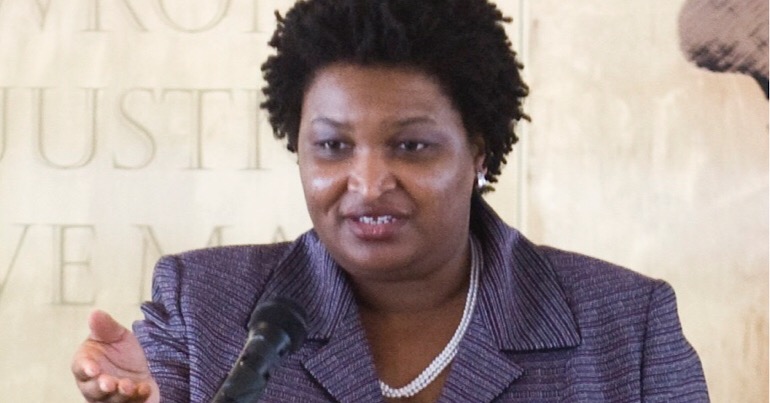 Editor’s Note (22/05/2020): Since the publication of this article, Abrams has received criticism for her links to billionaire Michael Bloomberg and her defence of presumptive Democratic presidential nominee Joe Biden in the face of sexual assault allegations.

Progressive Stacey Abrams won a landslide victory in the Georgia gubernatorial primary over ‘moderate’ Democrat Stacey Evans. And the win shows the Democratic base is ready for a break with centrism in favor of bold, leftist politics.

Importantly, she also ran on growing the electorate by going after working-class people of color, non-voters and occasional voters. The effort stood in contrast to the strategy of trying to woo ‘moderate’, suburban, white voters, on display in the failed Jon Ossoff campaign in 2017.

Evans looked to a strategy similar to Ossoff’s, hoping to win back white voters who had gone for Republicans in Georgia since 2002.

But Evans couldn’t overcome a history of profiting from misery in the black community. Coupled with racially-insensitive gaffes, Evans couldn’t make headway in a primary dominated by black voters.

A test for Democrats

The race made for strange bedfellows. Centrist favorites like Hillary Clinton, Cory Booker and Kamala Harris all endorsed Abrams even as progressive groups like Our Revolution also gave Abrams their stamp of approval.

Congratulations to @staceyabrams on your primary victory tonight! pic.twitter.com/hlFVip5gIZ

But progressives shouldn’t expect this to translate to support for candidates in other races. For example, Clinton is expected to endorse incumbent Andrew Cuomo in the New York gubernatorial race against his more progressive challenger, actor and activist Cynthia Nixon.

Even though Democratic leaders continue to favor ‘centrist’ candidates, the party should look to the rising base of leftist candidates winning nationwide.

In recent primaries in Pennsylvania, candidates backed by the Democratic Socialists of America won big in state races. Pennsylvania voters also ousted their sitting lieutenant governor in favor of a progressive challenger.

The wins for leftists extend to the South as well, a hopeful sign for Abrams. Leftist candidates have won races in Virginia, Alabama and Mississippi.

The national party should take notice.

– See more about Stacey Abrams on her campaign website.

– Also check out other progressive candidates backed by Our Revolution and Justice Democrats.