As Trump speaks of pardoning himself, his lawyer says he could even ‘shoot’ someone and get away with it - The Canary 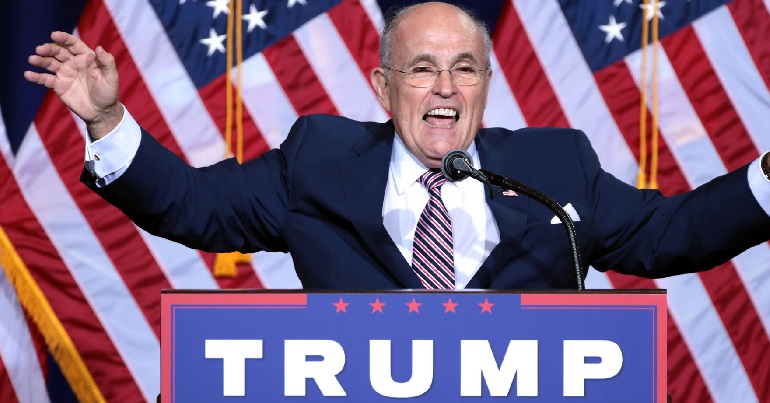 As special counsel Robert Mueller’s investigation into allegations of Russian interference in the 2016 US elections draws closer to a conclusion, Donald Trump made the extraordinary claim on 4 June that he could pardon himself should the probe conclude that Russian collusion did, in fact, take place.

Trump’s lawyer Rudy Giuliani added to this, meanwhile, by suggesting to HuffPost that Trump could even have shot former FBI director James Comey and escaped a subpoena or indictment.

Trump claimed that “numerous legal scholars” supported his view, and he repeated his frequent dismissal of the Russia investigation as a “Witch Hunt”:

As has been stated by numerous legal scholars, I have the absolute right to PARDON myself, but why would I do that when I have done nothing wrong? In the meantime, the never ending Witch Hunt, led by 13 very Angry and Conflicted Democrats (& others) continues into the mid-terms!

In January, Trump’s legal team wrote a letter to Mueller stating that Trump:

could, if he wished, terminate the inquiry, or even exercise his power to pardon if he so desired.

Legal experts unconnected to the Trump administration, however, have been extensively questioned on the matter in US media this week. And they have widely rebuked the president’s claim, with some saying it shows that he believes himself to be above the law.

In a second tweet, Trump added that the entire investigation was “unconstitutional.”

The appointment of the Special Counsel is totally UNCONSTITUTIONAL! Despite that, we play the game because I, unlike the Democrats, have done nothing wrong!

This claim was also broadly dismissed.

The tweets came just a day after Rudy Giuliani – the newly appointed member of Trump’s legal team and former New York City mayor – claimed that Trump wouldn’t have been indicted even if he had shot former FBI director James Comey. Comey was involved in investigations into alleged Russian interference in the 2016 elections before being fired in May 2017.

Giuliani’s comments fit within a wider pattern of invoking violent themes and metaphors on the part of Trump and those close to him. For instance, during the 2016 election campaign, Trump boasted that he could shoot someone and still get elected. And at another rally, he said of a protester who had disrupted the gathering that he would like to “punch him in the face.” And he added that, in the “old days”, protesters would be “carried out on stretchers.”

Norm Eisen, who served in the Obama administration as an ethics lawyer and is now a Brookings Institution fellow, said of Giuliani’s remarks:

A president could not be prosecuted for murder? Really? It is one of many absurd positions… It is self-evidently wrong.

Giuliani was not on Trump’s legal team when the letter to Mueller was sent earlier this year. But he said during an interview on ABC News that he believes Trump “probably” has the power to pardon himself – though he added that he views such a move as politically inexpedient. He stated:

I think the political ramifications of that would be tough. Pardoning other people is one thing. Pardoning yourself is another.

Giuliani served as mayor of Trump’s hometown of New York City from 1994 to 2001. He’s courted controversy for defending Trump against allegations of racism, sexual assault and his alleged failure to pay federal taxes for as long as two decades. He has, nonetheless, had a rocky relationship with Trump since his election to the presidency.

Though an early supporter of Trump’s 2016 presidential campaign and regular feature on the campaign trail, Giuliani was seen as having been snubbed after the elections due to not receiving a cabinet appointment. In January 2017, he was named as an informal advisor on cybersecurity. And in April 2018, he was formally appointed to Trump’s legal team. In his short time in this role, it appears that his relationship with Trump has again become strained.

In short, there are worries not only that Trump has a flimsy understanding of US law, but that his team’s violent themes and metaphors are – as MSNBC host Joe Scarborough has said – “literally out of a tyrant’s playbook.”

It seems lawyers could have a lot on their hands in the coming months and years.