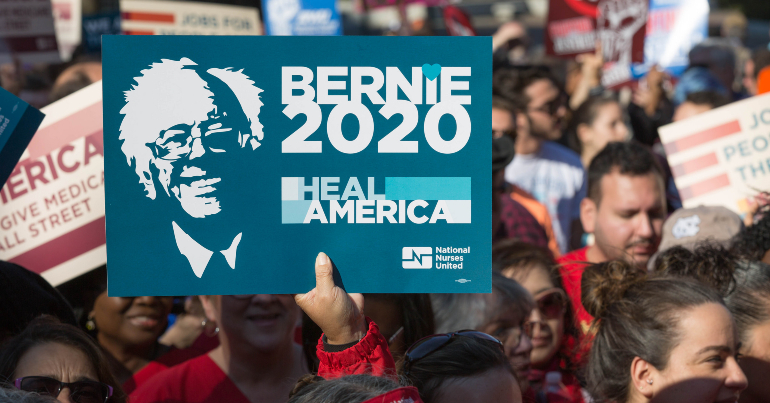 The Democratic Party in the US just enacted reforms not dissimilar to those that paved the way for Jeremy Corbyn’s rise to the leadership of the Labour Party in Britain. By taking power from party elites and putting it in the hands of the grassroots, the Democrats could have their own Corbyn moment in the run-up to the 2020 presidential elections.

On 25 August, the party held a vote to radically change the process for selecting its candidate for presidential elections. Taken during a meeting of the Democratic National Committee (DNC) in Chicago, party members voted overwhelmingly in favor of reforms that will remove the outsized role of establishment party figures in state primary races.

In the US, both parties use primary elections in each of the country’s 50 states. They allow members to democratically choose which candidate they wish to stand in the general election. But for complicated historical reasons, rather than voting directly for their preferred option, voters instead choose ‘delegates’. These delegates are ‘pledged’ to a particular candidate and if elected represent their affiliated candidate on behalf of voters in a final convention that officially elects the winning contender. (US politics can be desperately convoluted!)

In the prior arrangement, senior DNC functionaries, Democratic members of congress and various other party figures were selected internally to serve as ‘superdelegates’ in each state. Despite not having been elected by voters, they had a vote in the final convention that chooses the candidate. The reforms passed on Saturday strip these superdelegates of the ability to vote in the first round of ballots in the convention unless the contest is already decided or in the unlikely event of a tie. This effectively leaves the decision for choosing a candidate solely in the hands of those delegates elected by party members.

Many, and especially those from the party’s progressive wing, have long criticized the role of superdelegates as undemocratic and unfair, given that, unlike regular delegates, they had no democratic mandate. Senator Bernie Sanders, for instance, railed against their influence in the 2016 Democratic primary, which he narrowly lost to Hilary Clinton. The majority of the 712 superdelegates were pro-Clinton (even her husband, former President Bill Clinton, was one). They were widely seen as reflexively supporting Clinton since she represented the centrist establishment wing of the party that had been dominant for decades.

Indeed, their influence was seen as a major factor in Clinton’s victory over the outsider Sanders. Though they only made up about 15% of delegates (712 out of 4,765) in the 2016 race, the superdelegates disadvantaged Sanders in more complex and subtle ways than this figure implies. Talking to Democracy Now! Radio on 27 August, long-time progressive activist and Sanders ally Norman Solomon said:

Before a single ballot was cast in a Democratic primary or caucus, Hillary Clinton had more than half of the superdelegate votes, and that allowed the cable channels to run on their lower part of the screen, “Hillary Clinton way ahead as the front-runner.” An analogy would be, let’s say you have two contestants in a race. The gun goes off, but at that moment one of the racers is way ahead. And that is because of superdelegates. And not only that, by being way ahead at the start, then the nutrients, the vitamins, the water, in the form of funding and media momentum, is already given to that person, whereas in this case Bernie Sanders was still at the starting line.

Surprisingly, in addition to a vote passing near-unanimously, Sanders was joined by DNC chair Tom Perez in his support for reform. The majority of Democratic Party members of the US Congress, on the other hand, had strongly opposed the move. This is not surprising given the fact that it removes their ability to influence their party’s presidential primary race.

Insofar as they place the choice of presidential candidate solely in the hands of the party membership, the reforms bear a similarity to changes made to the UK Labour Party’s leadership election rules that led to the election of Jeremy Corbyn in 2015. The previous year, then-party leader Ed Miliband abolished the ‘electoral college’ system of selecting a leader. This process involved elections taking place within the parliamentary party, affiliated unions and the general party membership. The outcome of each then weighed as a third each toward the final outcome. The replacement ‘one member, one vote’ system led to Corbyn’s triumph over his three more establishment rivals, despite him having entered the race as a ‘rank outsider’.

The DNC reforms arguably also bear some similarity to the so-called ‘McDonnell Amendment’. Passed in 2017, this reform reduced the number of MPs needed to nominate a candidate for the leadership contest and was widely seen as paving the way for another progressive MP to succeed Corbyn as leader.

Clearly, the model of democratization of established center-left parties as a route to power for the left is being pursued with increasing success on both sides of the Atlantic. And the US Democratic Party might soon follow in the footsteps of Labour by having a true progressive in the driving seat and on the cusp of fulfilling that aspiration.