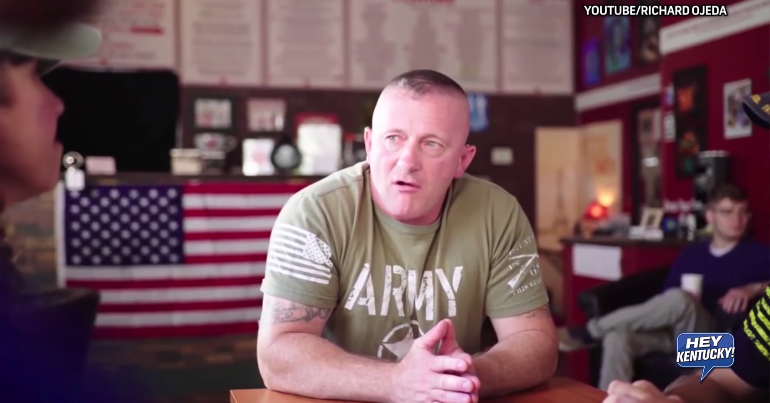 Donald Trump won the 2016 presidential election in the US partly by appealing to disenchanted white working-class voters across ‘Middle America’. This has raised the obvious question of who will be best placed to challenge Trump from the left in the next presidential election in 2020. And there now seems to be a contender that some believe fits the bill. But is he really the left’s answer to Trump?

On 11 November, Richard Ojeda announced his intention to run in the Democratic Party primary for the 2020 presidential election. As a relatively obscure state senator from the rural state of West Virginia, commentators consider him somewhat of an ‘outsider’ or ‘underdog’ candidate. But in spite of this, he has nonetheless built up a considerable public profile. He’s probably best known for featuring in Michael Moore’s 2018 film Fahrenheit 11/9, which skewered the Trump presidency. Moore’s interview with Ojeda ended up serving as a trailer for the film, which further boosted his profile.

The former army major, who served 24 years in the military (including stints in Iraq and Afghanistan), is far from your stereotypical Democratic Party politician. He speaks with a distinctive working-class rural accent (known as a ‘drawl’) and sports multiple tattoos.

Ojeda is a strong supporter of trade unions and advocates for reform of the healthcare system. He is in favor of the legalization of cannabis. He has also called for reform of the US lobbying system and for greater government accountability. In his interview with Moore, he spoke out strongly against US foreign interventionism and the treatment of single mothers and working-class communities by the US political establishment.

In other words, he seems to fit the bill. He has the common touch and lacks the kind of establishment liberal baggage that turned so many people away from Hillary Clinton (and, in some cases, straight into the hands of Trump). So it seems like he could court many Trump voters in Middle America back into the Democratic Party fold.

Some, however, have expressed reservations.

Although Ojeda supported Bernie Sanders against Clinton in 2016, he then voted for Trump in the general election (a surprisingly common trend amongst rural, white, working-class men). He later confessed to regretting his vote for Trump, saying in early 2018:

he hasn’t done shit. It’s been a friggin’ circus for a solid year… All he’s done is shown that he’s taking care of the daggone people he’s supposed to be getting rid of.

But it seems that voting for Trump is not the only thing to give moment for pause. Writing at the World Socialist Web Site, Naomi Spencer points out:

Ojeda has endorsed the Trump administration’s policies on immigration, environmental deregulation, and corporate tax cuts, and applauded the stacking of the executive branch with military advisors.

And it gets worse…

Perhaps worse still, Ojeda seems to have an affinity for the military-industrial complex. Writing in Counterpunch, Nick Pemberton states:

Ojeda is a very good boy, as far as the Empire is concerned… [he] stuck around 24 years in the Army, rising to the title of major in the heartbreaking wars of Afghanistan and Iraq. He now teaches at the Junior Reserve Officers’ Training Corps (JROTC). This might be the most sinister propaganda organization in America.

Pemberton adds that we should not be fooled by the “single Trump to progressive convert” that is being offered. It might be tempting to be drawn to someone who at first glance seems like the perfect person to beat Trump in 2020. But as the old saying goes, ‘if something seems too good to be true, it probably is’.

In short, it seems like it’s probably best to stick with Bernie for 2020, too…